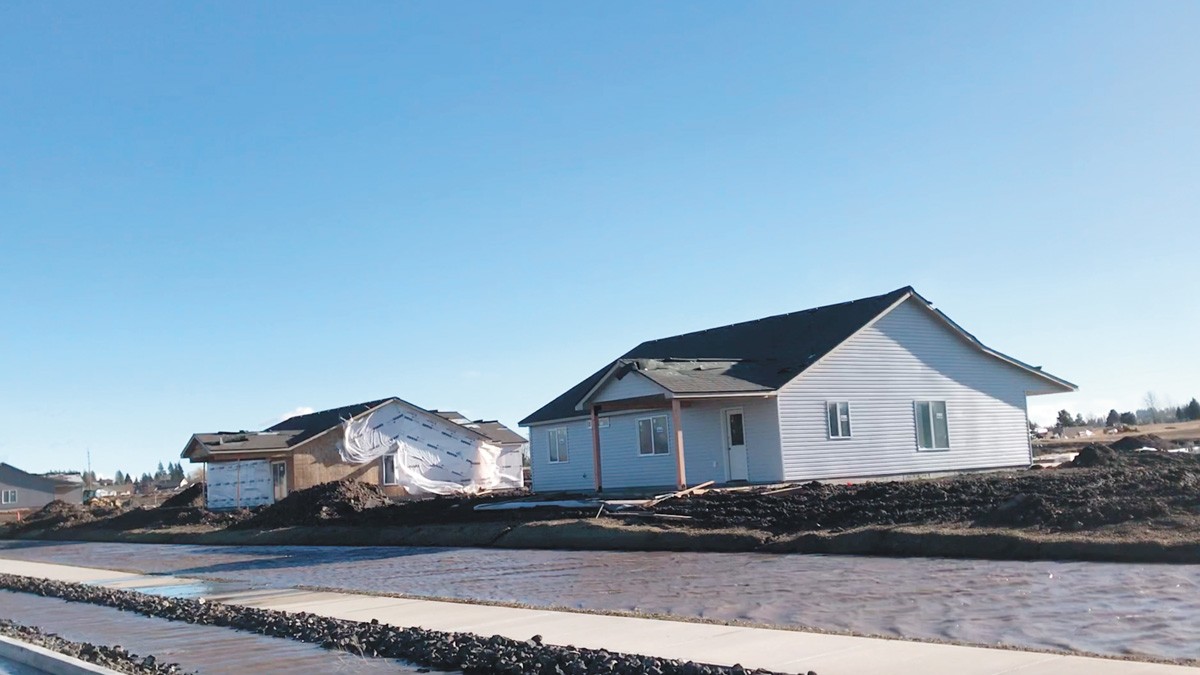 A video recorded by Terry Horne shows water pools in front of brand new construction near the newest West Terrace homes in January. Flooding in the area has prompted in-depth stormwater studies to find solutions as the West Plains continues to grow.

Recent additions to the West Terrace area near Cheney have made new homes available. She and her partner put $3,000 in earnest money down on one of the newest homes and made an offer.

But while walking through the neighborhood, Buckman says they ran into neighbors from up the street who said flooding issues have been rampant in the area.

At home, she searched for more information and learned from the Spokane County stormwater department that flooding had long plagued older homes there. But how bad was it?

Buckman also found a 2018 Inlander article that led her to West Terrace resident Terry Horne, who's earned the nickname Terry "Brockovich" — a reference to Erin Brockovich, the notable activist — as she's made it her personal mission to address the water issues since her own home flooded.

From Horne, she learned residents had complained to the county about flooding and the street overflowing with water since the first homes were built around 2004. The soil there has a high clay content, groundwater sits near the surface, and the flat landscape doesn't help water flow to drainage ponds.

The fix back then was to install sump pumps for several homes, but with the systems spitting water directly into the street, there's been a decade of problems with ice dams forming in the winter and standing water in warmer months.

Later homes were built above crawl spaces (which also flooded). The newest homes are being built on slab foundations with newer stormwater systems. Matt Zarecor, assistant county engineer for Spokane County Public Works, says he hasn't heard that any of the new additions have had trouble with flooding once their pump systems were turned on.

"To my knowledge, the new developments have been working like they're supposed to," Zarecor says.

But Horne says that sidewalks in one recent addition started to crack after just a year. As an experienced homeowner, Buckman says she wasn't convinced the slab foundations would prevent the problems she learned about, and she decided to back out of her purchase.

"When I talked to [the developer's] realtor, she said, 'We build the new homes on slabs so we don't have flooding problems,'" Buckman recalls. "I thought that was kind of crazy because that doesn't mean water won't come up into your home."

Still, Amazon and other companies are booming on the West Plains properties around Spokane International Airport and driving growth. The need for homes is high, and listings are quickly scooped up. Meanwhile, politicians hope to entice even more businesses to the area.

With West Terrace draining toward the West Plains, planning how to get water away from any new developments in that area is key. This spring, two major stormwater studies are figuring out how to do just that.

IN THE NICK OF TIME

Buckman says she luckily learned about the flooding blocks from the home she was about to buy just in time to rescind her offer. The developer, Homestead Construction (which didn't return a message seeking comment), even returned her $3,000.


"The thing that was surprising to me was that they were still building even though they know there are problems," Buckman says.

Yet, even the son of the neighbors who told her about the flooding plans to buy there.

Now, Buckman is unsure where she'll be able to make an offer. Since she sold her home in late 2019, she's seen prices skyrocket. Technically, she's homeless right now, living out of a camping trailer and taking time in between houses to vacation.

"I can't find anything to buy that's decent with the money I have," Buckman says.

Still, she wonders if first-time homebuyers in the West Plains might not be as savvy about researching issues there. Zarecor says that it's the duty of sellers to disclose issues like flooding on a property to buyers. The county wouldn't likely issue a blanket warning.

"It's not the county's place necessarily," Zarecor says. "Frankly, it could be a liability if we warn about that where people don't have flooding issues."

When her home flooded just months after she bought it, Horne put in dozens of public records requests and learned basements shouldn't have been approved there. She organized neighbors to push Spokane County for a solution to their water woes.

While the county hasn't offered to pay to move water away from affected homes, it commissioned a study from Osborn Consulting Incorporated to figure out options for the entire drainage basin.

The plan is being updated with neighborhood input and will be released in April, with another open house that month, Navickis-Brasch says.

It's still not clear who would be expected to pay for the local flood fixes, which may include work in the public right-of-way and on individual properties.

Property owners in three problem development areas — including part of the South Hill, West Terrace, and Five Mile Prairie — pay more into the county's stormwater account than other county residents, Zarecor says. But he notes the highest stormwater fee is still lower than elsewhere in the state.

"It's kind of an ongoing conversation about who should be responsible for what, and there's a lot of emotion on both sides," Zarecor says. "We're trying to be responsible stewards of public dollars and not benefit one group too much, but also be mindful of the neighborhoods ... which were the early learning curve of developing on the West Plains."

North of West Terrace, the boundary for the West Plains Public Development Authority (renamed S3R3 Solutions) starts just on the other side of I-90.


In partnership with neighboring cities and the county, the development authority wants to promote large businesses and manufacturers moving there, so Osborn has also been commissioned to study whether it makes sense to install regional stormwater treatment facilities around the airport.

Typically, owners would be asked to accommodate runoff from newly developed properties on a project-by-project basis. But that can lead to large properties requiring huge portions of their land be used for evaporation ponds, Navickis-Brasch says.

"Is there a better way for this system so developers can maximize the use of their property and manage and treat stormwater without having issues?" she says. "We've got a lot of development anticipated in the area, and we want to be ready for it."

The study, scheduled to be finished in May, suggests installing infiltration sites that would look like parks from above while storing water underground to naturally infiltrate into the soil, among other options.

If the public agencies involved decide to move forward, federal and state grants could be sought to help tackle what could take several years and close to $200 million to build. While pricey, the estimated benefits are larger: between job creation, increased tax revenues, reduced project costs and value added to the properties, the regional approach could create benefits of $645 million.

"Regional systems happen all over. They're challenging because you have to plan for a large area and they can be expensive to get going," Navickis-Brasch says. "But there can be tremendous benefits." ♦