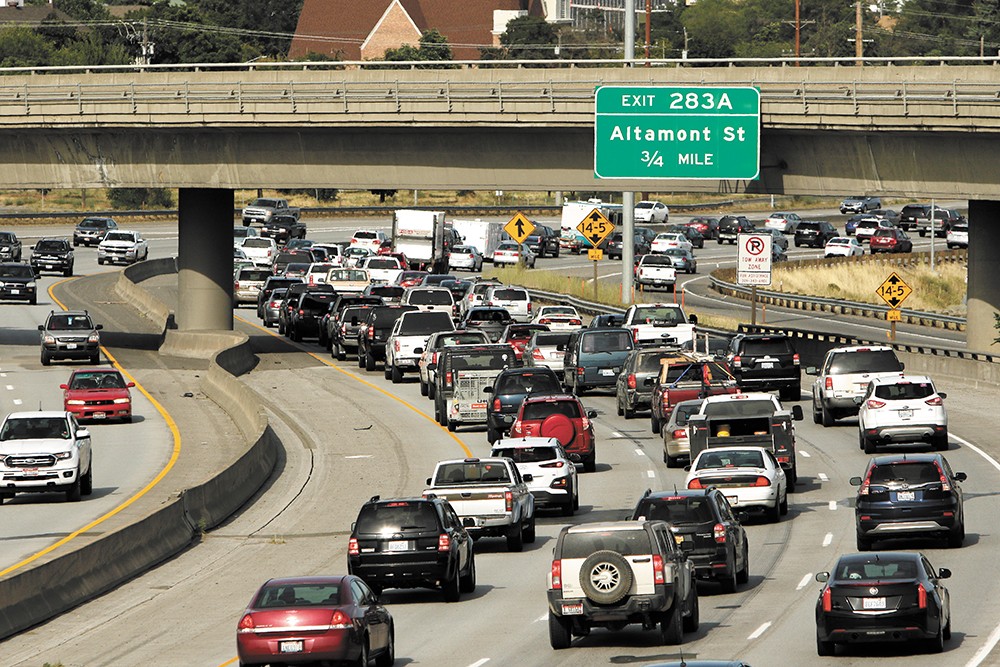 Young Kwak photo
According to the Washington State Department of Transportation traffic volumes are steadily increasing on the I-90 corridor, up 10 percent from 2012-2015 alone.

There's a difference between growing and growing out of control. For now, the Spokane region is growing. Local realtor Marianne Bornhoft says that buyers, priced out by Seattle and Portland's real estate markets, are streaming across the Cascades to buy in Spokane. And that has had consequences for an increasingly heated housing market

"It concerns me a little bit," Bornhoft says. "My clients who live here are teachers and nurses... they can't buy because they're getting beat out from people from outside of the area."

Yes, according to the Spokane Regional Transportation Council, one of several agencies that predicts community growth, the official working assumption is that the Spokane region will still continue to grow at the steady 1-2 percent rate a year. But those are all based on historical trends. SRTC Senior Planner Michael Ulrich says there are events those calculations haven't yet taken into account, like the big Amazon fulfillment center being built in the West Plains.

Growth brings a lot of good things to a community, of course. It can mean more tax revenue, more diversity, more jobs and more possibilities. But it can also strain on our roads, our utility systems and our housing market. If people keep moving to the Inland Northwest without there being enough housing, rents are going to keep increasing.

One reason there's so much growth happening just across the Idaho border compared to the growth in Spokane County? In Washington state, there's a law called the Growth Management Act that draws "urban growth area" borders inside counties. Outside of that UGA, developers can't build dense housing complexes and they generally aren't allowed to get the same sort of utility access. The intention is to prevent sprawl. Build too far out and you strain your roads, your pipes and end up with terribly long commutes.

But most of the easier tracts of land to develop in Spokane County within the UGA boundaries have already been taken. (Communities in Idaho still have land-use restrictions, of course, but those are generally created at the county level, not through a process tightly mandated by state law.)

"We're running out of land," says County Commissioner Al French. "There's not enough land to do any substantive development. We're going to be built out this summer. That's it."

French has first-hand experience. He's a developer and architect himself and was involved in developing Eagle Ridge, a development in the Latah Valley.

"There's no other development inside the city limits that can handle a development like Eagle Ridge," he says. The hope was that the UGA would drive density within cities, but the city of Spokane, French says, remains the least dense major city in Washington.

During the Spokane mayoral primary, multiple candidates pointed to the constraints of the Growth Management Act as a serious problem driving up housing costs. But Kitty Klitzke, of the land-use activism group Futurewise says that the UGA isn't the problem.

"The problem we have in Spokane [isn't] about lack of available land," Klitzke says. "It's about people holding onto land and thinking they're going to speculate on it, waiting around to see what happens."

The proposal to fixing that, however, could be even more ambitious than expanding the UGA boundaries. Klitzke suggests that might mean overhauling the property tax structure to make it less attractive to hold on to undeveloped land, and more attractive to develop it. 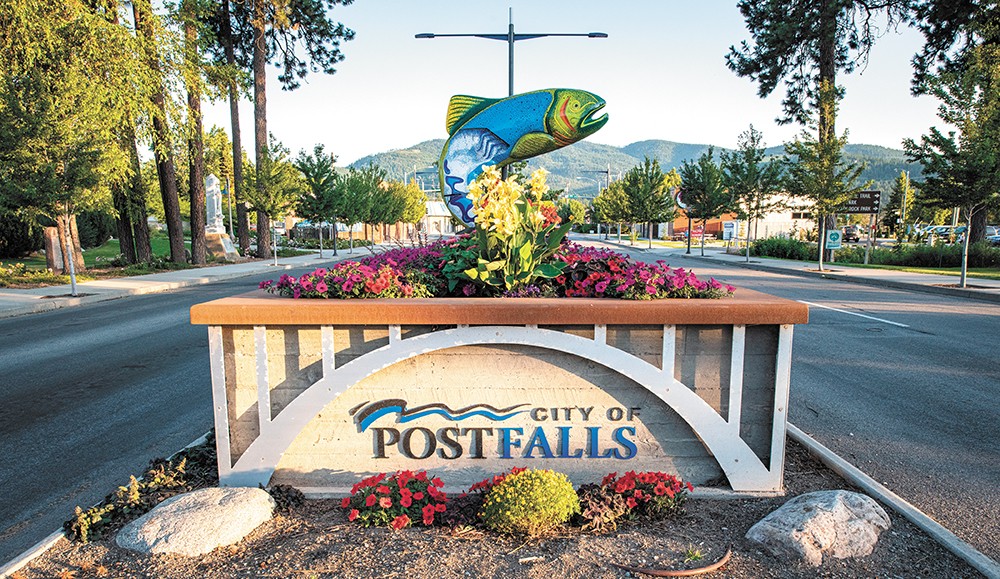 On the one hand, government rules like the UGA try to outlaw sprawl. But there is also a thicket of governmental rules banning the opposite. They effectively make the sort of dense, walkable neighborhoods that urban planners dream about illegal in much of the city.

"Our vacancy rate is very low and we also don't have enough diversity in our housing mix," Spokane Mayor David Condon said in his state of the city address this year. "Retiring boomers and young Millennials alike are looking for things like condos and townhouses, in addition to apartments and single-family homes."

But condos and townhouses are hard to build in most of Spokane. Zoning regulations set how tall a building can be and how many apartment units they can contain. They mandate driveways, parking spaces, and a certain amount of space between houses.

Suburbia isn't just a preference. In much of the Inland Northwest, it's the law. But that's beginning to change.

"Some of the larger communities in the Northwest are starting to talk about eliminating single-family zoning," Klitzke says. In June, the Oregon Legislature passed a law allowing duplexes in single-family zones in every city with more than 10,000 people in it.

The city of Spokane's changes have been more modest: Loosening parking lot, lot size and building height restrictions in some neighborhoods. But some people, like City Council president and mayoral candidate Ben Stuckart, are calling for the city to go further, by changing the zoning to allow for density near arterials like Monroe Street.

Avista's Forsyth says he's been surprised that one area in Spokane County hasn't been growing: Medical Lake, a small city on the West Plains. But he says there's a reason.

"In the Medical Lake, there's a water quantity issue," Forsyth says. Medical Lake and Airway Heights rely on a different aquifer than Spokane, and that aquifer has slowly been draining. On top of that, add the contamination from firefighting foam used at Fairchild Air Force Base. Last year, the city of Spokane struck a deal allowing Medical Lake to purchase water at a premium from the city of Spokane in an emergency, but the constraints remain.

Already, navigating Interstate 90 is a bit of a nightmare during rush hour. Now imagine what it would be like if Post Falls was twice the size it is now.

Fortunately, says the SRTC's Ulrich, there are already some plans underway that may relieve some of the tension in the next few decades. The North Spokane Corridor will potentially divert a ton of semi-truck traffic away from the bottleneck in downtown Spokane. Similarly, the revamped Bigelow Gulch road project could also allow traffic heading to the northern area of Spokane passing through to skip the uglier clogs in Spokane County.

Similar projects are underway in the Coeur d'Alene area, like the Huetter Bypass, which would divert some U.S. 95 traffic around Coeur d'Alene. Anderson says the community has been trying to push the Idaho Transportation Department to allow the city to have more control of their signal timing, with the hopes that Couer d'Alene would be able to do a better job at eliminating traffic jams. 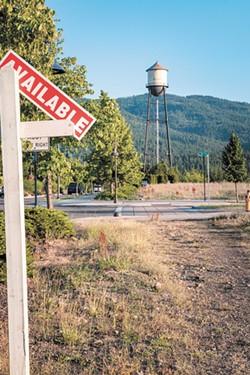 Meanwhile, Forsyth says, it's crucial to keep improving public transportation. There's an artform to it. Expand public transit too soon and it's a waste of money. But waiting too long has a huge cost as well.

"You look at Seattle when you wait too long to build out that public transportation infrastructure, you get to the point where it's horrendously expensive to do it," he says.

Yet there's a huge challenge with doing long-term projections and planning for the future of transportation, Ulrich says. The future of transportation is changing wildly. Think of how Uber and Lyft have changed the way we get around in the past decade. Now think of how Lime electric bikes and scooters are beginning to change the way we get around in just the past two years.

"Autonomous vehicles are potentially on top of us," says Ulrich. By the time, say, the north-south corridor is completed, imagine how radically transportation needs could change. That's the trouble with predicting the future while standing in the present.

The original print version of this article was headlined "MO PEOPLE, MORE PROBLEMS"