As jails across the state grapple with the opioid crisis, facilities in rural areas face the toughest challenges 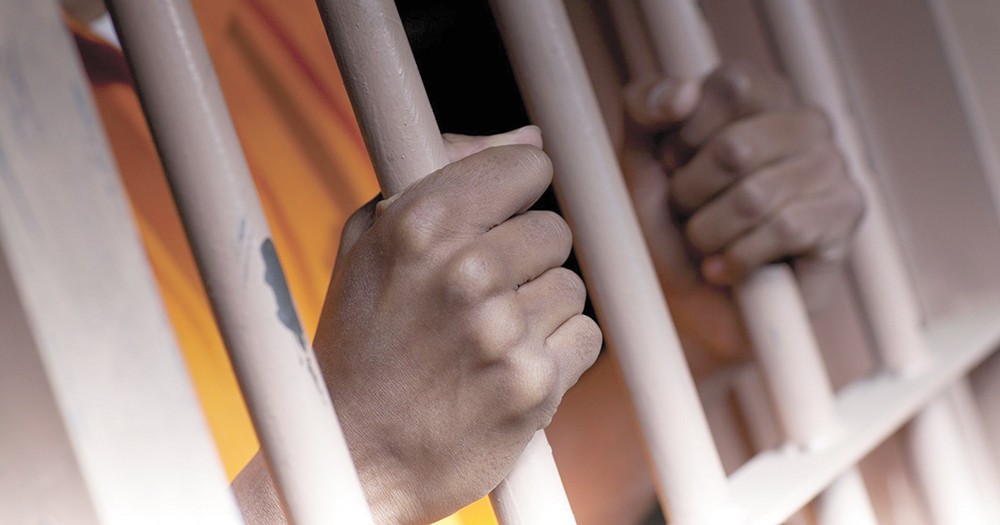 In 2013, Dr. Barry Bacon saw two problems: an area overrun with opioid addiction, and a revolving Stevens County Jail door that sweeps addicts in as quickly as it shoves them out.

The now-60-year-old physician, along with another doctor who worked in the county jail, hatched a plan to offer people treatment while they're locked up.

"Ninety-five percent of people in the jail were dealing with an opioid addiction at some point and the fallout from a life out of control," Bacon says, anecdotally. "Options [for treatment] were limited, and we were basically just punishing people for dealing with addiction."

Bacon's efforts to use what's known as medication-assisted treatment — where patients are prescribed one of three drugs approved by the FDA to treat opioid dependence — is part of a national conversation about how to address the opioid epidemic.

Along with a behavioral health counselor, Bacon started volunteering his time seeing Stevens County inmates in Colville, offering to start them on Suboxone, which contains the drug buprenorphine and is considered by many experts as the standard of care for opioid addiction.

After about a year, Bacon says nine out of the 19 people he'd started treating were doing "measurably better." They were no longer taking illegal drugs. They were moving their lives forward in work, school, housing and familial relationships, he says — what he considers a major success.

But by 2015, Bacon had to stop prescribing to new patients in the jail. He was maxed out on the number of people he could legally prescribe Suboxone to, he says. (To prevent abuse, doctors are limited on the number of patients they can prescribe these drugs to.) Bacon continued to treat those patients until 2017 when he resigned from his job as a physician in Northeast Washington Health Programs and moved out of Stevens County for personal reasons.

The problem was, few other physicians in the area were authorized to prescribe the drug, he says. Due to a lack of money, knowledge or willingness of health providers, or some combination of the three, Bacon says he could no longer continue seeing patients in Stevens County.

"I was treating more people in Colville than all of Stevens County combined," he says. "Patients were scrambling. Some bailed and said, 'I guess I'll just wean myself off.'"

Bacon believes the biggest barriers in rural northeast Washington, which extend to the jails in that area, are the lack of providers authorized to prescribe the drugs as well as those willing to become authorized.

Studies show that treating people with methadone or buprenorphine before they're released from incarceration, and connecting them with services in the community afterward, increases the likelihood they'll continue treatment and reduces the risk of death after release. Drug treatment behind bars has also been shown to reduce crime, recidivism and the cost to taxpayers.

"I recognized how important this was and how few are doing it in rural areas," Bacon says. "It's really good medicine, and not just the drug, but in terms of restoring lives to sanity."

There are approximately 47,700 Washingtonians addicted to opioids, according research from University of Washington professors Marc Stern and Lucinda Grande. More than half of those people, about 25,500, will exit the doors of a Washington jail this year, Stern and Grande estimate.

"The numbers showed us that the jails are the epicenter of the opioid crisis," Stern says. "So in some ways, the jail is unfortunately the perfect place to address this problem. It's where you can change behaviors and turn someone's life around."

Stern and Grande's research — a survey of 33 jails across the state, of various locations and sizes — shows a "high level of interest" for medication-assisted treatment among jail administrators. A lack of resources, as in doctors legally authorized to prescribe the drugs, and in money available in jails' budgets to pay for them, as well as gaps in knowledge, were among the biggest barriers, Stern says.

For example, "some [jail officials] were not aware that patients can die from complications such as dehydration due to vomiting and diarrhea, or suicide due to distress from opioid withdrawal symptoms," he writes in the report.

Fourteen of the 33 jails surveyed offer at least one of the three drugs approved to treat opioid dependence, the most common being buprenorphine (one of the active drugs in Suboxone).

None of the smaller facilities included in the survey (average population of less than 50 people) offered medication-assisted treatment.

"It's the smaller places that are really challenged in resources and knowledge," Stern says. "It's disproportionately harder to provide good health care in a small jail."

The Washington State Opioid Response Plan calls for "jails and prisons to initiate and/or maintain incarcerated persons on medications for opioid use disorder."

This year, the state has applied for a federal grant worth about $21 million to increase access to medication for opioid treatment in jails and the community generally, says Charissa Fotinos, deputy chief medical officer for the state Health Care Authority.

"Many jails in the state are interested in starting people on medication-assisted treatment or continuing it," Fotinos says. "One challenge jails have had is the medication is expensive. People's Medicaid is suspended, and jails don't have a way to pay for buprenorphine."

She adds that one of the state's priorities is to target people released from jails and prisons "because they're at the highest risk for a fatal opioid overdose."

Additionally, the American Civil Liberties Union of Washington is suing Whatcom County on the west side over its refusal to offer this treatment to jail inmates. A decision in favor of the ACLU would be "groundbreaking" and could set a statewide precedent, ACLU spokesman Doug Honig says.


"The numbers showed us that the jails are the epicenter of the opioid crisis."
~ UW professor Marc Stern

The need for opioid treatment in three of Eastern Washington's northern rural counties is apparent to those who watch the jail population cycle in and out of custody.

Although none of the jail facilities in Ferry, Stevens or Pend Oreille counties currently track how many people pass through their doors struggling with opioid dependence, there are some general indicators.

For example, felony drug charges filed in Stevens County, with a population of about 43,700 people, shot up from 35 in 2013 to 131 in 2017. As of June, prosecutors had already filed 50 felony drug cases, though not every charge involves opioids. For the tri-county area that includes Ferry and Pend Oreille, 33 percent of all criminal charges filed in 2017 involved drugs.

Additionally, the opioid prescription rate for those counties — 106, 97 and 104 respectively per 1,000 people — is significantly higher than the statewide rate of 77.

Consider the Ferry County Jail, a 45-bed facility in Republic, as an example. Both the jail's superintendent, Shawn Davis, and the Ferry County prosecutor, Kathryn Burke, agree that drug addiction and the crime that comes with it are significant issues.

But there are currently no providers in Ferry County who can prescribe buprenorphine or methadone, Davis says.

"The population of locals in the jail is growing due to drug charges and the heroin epidemic," he says. "We typically have one or two people on a rolling basis that require that attention or treatment."

Beyond the logistical barrier, Davis says he is concerned about inmates potentially abusing or selling their drugs to others, which is a common objection from jail administrators across the country. But, he says, if someone comes into the facility with a prescription, the jail is required to provide the appropriate medication. Short of that, inmates can be left to go cold turkey or are taken to the hospital.

"It's hard to prevent prescription drugs from being smuggled back into the population," Davis says. "Inmates will swallow hydros, for example, go back to their room and throw them up and hand them off. It's amazing what people are willing to do to get some kind of high when they're addicted."

Davis says he is generally not supportive of medication-assisted treatment, which he believes is essentially trading one addiction for another.

However, Burke acknowledges that "some people probably really do need it, so if we had the ability to do it in our jail, I wouldn't oppose it."

For Bacon, the lack of providers in Ferry County is precisely why a medication-assisted treatment program is high priority.

An essential piece of that work, Bacon says, will be connecting people with services and resources after they're released from jail.

Throughout Washington, there is a patchwork of medication-assisted treatment in jails — from Spokane County's methadone program, to Ferry County's complete lack of providers, to Whatcom County's refusal to provide such treatment to Island County's full-tilt support. In Spokane, eight people have died in the jail since June 2017, including one woman on Aug. 25. Several of the deaths are suspected to be drug related.

Last week, the Spokane County medical examiners ruled that one of the eight people, 52-year-old David Good, died after choking on his own vomit and that "opiate and methamphetamine intoxication" played a role. Jail medical staff had directed that Good be checked every 15 minutes. But 32 minutes passed from a guard's last check and the time Good was found not breathing, according to internal records.

"We have a captivated audience, and we can put them through treatment rather than warehouse them and set them on the same track they were on before," Briones says. "We're not going to have people suffering through withdrawals in our facility."

Briones adds that Island County's drug court does not exclude people who take buprenorphine or methadone.

He acknowledges that his budget for medication spiked from $8,000 to about $20,000 in the past two years, as counties typically take on the medical expenses for people in their custody. But, he says, "with modern corrections, it's the right thing to do. The transportation was an issue and it's expensive, but with the direction we're taking our facility, we want to do evidence-based treatment."

Island County started its treatment program in March of this year and is collecting data to gauge its effectiveness, Briones says. It's too early to draw any conclusions, but similar programs elsewhere in the U.S. have shown success.

In Rhode Island, for example, where the state prison and jail systems are combined, a preliminary review of the treatment program shows post-release overdose deaths plummeted by 61 percent.

Aside from the life-saving potential, Stern, the UW professor, points to data from the Washington State Institute for Public Policy showing that drug treatment in prisons, and in the community after a person is released, have huge cost-saving impacts.

Additionally, a 2006 report from WSIPP shows that in-custody drug treatment can reduce crime by 5.7 percent and save nearly $8,000 per patient, when considering damage to crime victims, benefits to taxpayers and the cost of providing the treatment.

"For a moment, you have your hands on 50 percent of the opioid dependent people in the state at a time when they're malleable," Stern says, emphasizing that the most effective treatment includes a plan after a person is released. "If you invest money in this problem, including outside the jail, you can actually make your money back." ♦

The original print version of this article was headlined "Captive Audience"