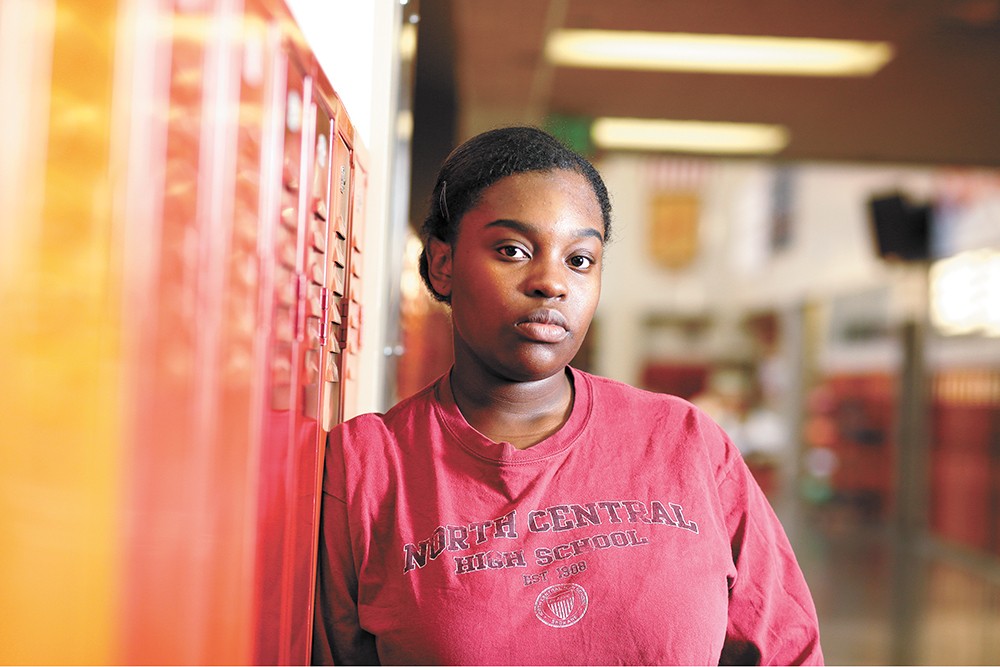 Zyaira Webb has never had a black teacher in Spokane Public Schools. Since moving to Spokane as a middle-schooler, only two of her teachers identified as a race other than white.

Often, she's the only person of color in the classroom at North Central High School, where 94 percent of the teachers are white.

"Being in a white classroom, where I'm the only African-American or person of color and the teacher's not even of color, it's kind of like I feel, not embarrassed, but like I don't belong," says Webb, 17.

It's an experience that students share too often both across the country and locally, experts say. Statewide, only 14 percent of teachers were teachers of color in the 2018-19 school year, according to data provided to the Inlander by the Office of the Superintendent of Public Instruction. In Spokane Public Schools, that drops to just 7 percent teachers of color. That's despite the fact that diversity among students in Spokane is growing, and non-white students already make up about one-third of the population.

The disparity plays a major role in student achievement for children of color, research shows. For example, a 2017 study by the IZA Institute of Labor Economics found that black boys who had a black teacher between third and fifth grades were significantly less likely to drop out of high school, and both boys and girls who were black were more likely to attend college.

"There are many studies out there that show that children of color who see a teacher of color have higher graduation rates, have better test scores, and it may impact the discipline of kids of color in schools," Alvarez says.

Webb says being surrounded by more adults of color would make her more comfortable in school. In the two classes she's had in Spokane with a non-white teacher, she's felt more confident raising her hand to answer questions. It's more empowering when she's around more people who look more like her, she says.

"If there's no teachers of color, it's like I can't make it in life because look who's around me: people who don't look like me," she says.

At North Central, she's been able to find mentorship in a counselor who is black. Webb says she's been called the N-word and a "gorilla" by students at school. Both incidents were handled appropriately by the school, she says, but it helped that there was a non-white counselor who understood how she felt.

"I can't really express racial problems to a non-person of color," she says.

There's plenty of research that says students benefit when teachers look more like them. Black teachers tend to have higher expectations of their black students' potential than white teachers do, a 2016 study published in Economics of Education Review found. At the same time, a Yale study found that preschool teachers hold black students to a higher standard of behavior than white students, leading to harsher discipline.

"We do know that when students see teachers who look like them and are engaging in teaching practices that validate how students approach learning, we tend to see higher academic achievement levels coming from those particular students," says Yolanda Gallardo Carter, the dean of the Gonzaga University School of Education.

But many students locally don't see teachers who look like them. In several Spokane schools, every single teacher was white last school year, according to state data. One of the schools without a teacher of color was Bemiss Elementary in northeast Spokane. But 45 percent of the student population there was non-white.

Teachers of color make up less than 5 percent of the workforce in the Central Valley, East Valley, West Valley and Mead school districts, state data shows.

"We need to be breaking down these ideas that only women should be teaching because only women know how to connect with other human beings."

Maria Flores, who works on educational initiatives for the state that include hiring and recruiting diverse teachers, says school districts are "very aware" of these numbers. She says districts have been trying to recruit and retain teachers from more diverse backgrounds. But so far, it hasn't made much of a difference for most of them.

"We're not seeing the numbers move," she says.

Flores says there's plenty that districts can do to move the needle. The few that have increased workforce diversity tend to be more urban school districts who partner with local universities, civil rights or other community organizations serving ethnic communities. They do more than "posting jobs on their website and hoping for the best," she says.

Still, it won't always work. Alvarez, with Spokane Public Schools, says the district is doing several things to try to recruit more teachers of color, including advertising in diverse communities and being more strategic about career fairs. The school board has set increasing its teacher diversity as an objective. But when local colleges, where Spokane schools get a huge chunk of their teachers from, aren't diverse, it's hard to make much of a difference.

"I just don't think we have the pool of candidates," Alvarez says.

It's not just white people who are most likely to become a teacher. More specifically, it's white women. Nearly three-quarters of teachers in Washington are women, state data shows.

"We need to be breaking down these ideas that only women should be teaching because only women know how to connect with other human beings," Carter says. "That's simply not true."

Providing more evidence that students benefit when they're represented in the teaching workforce, a study that used national data on 25,000 eighth graders from 1,000 schools found that boys fell behind girls when they had a female teacher instead of a male one.

Carter says it's impossible to say exactly why it's white women who dominate teaching. But she says it's the job of everyone in education to acknowledge the disparities and try to encourage the teaching workforce to look more like its students.

"If we are not doing the job of being thoughtful and intentional about recruiting students, prospective teacher candidates, into our programs who are reflective of the student population they are going to be teaching, then what we're saying is we don't really value and have in mind the people we're going to be serving," Carter says.

Tara Haskins, chair of the Education Department at Eastern Washington University, says there are several barriers in the way of people of color becoming teachers. Before this year, a main barrier was the fact that teaching candidates of color — many of whom learn English as a second language — had trouble passing the Washington Educator Skills Test-Basic, which was a requirement to become a teacher. Earlier this year, Gov. Jay Inslee signed a bill that eliminated a minimum score to pass the test, which could help admit more teachers with diverse backgrounds.

Haskins also says between paying for tests, graduation and submitting fingerprints and other expenses, it's pricey to become a teacher. And the salary for teachers hasn't always been a strong selling point.

Carter, who started at Gonzaga this year, says increasing diversity is something Gonzaga focuses on as well. This year, the college of education began offering a degree in community, culture and language. That, she says, can be an "anchor program" to explore these issues. It's important for aspiring teachers to ask questions like why students of color, students living in poverty and students with disabilities are constantly trying to make up an achievement gap in education, she says.

"Is it because those people don't know how to approach learning? Is it because they're inferior? No," Carter says. "It's because we aren't challenging systemic inequity within the institution of education."

Even if schools and colleges make significant progress in recruiting teachers from more diverse backgrounds, it will still be years before teachers in the Spokane region start to look more like their students.

What schools can do in the meantime is encourage teachers to better understand their students. Schools in Washington, including Spokane Public Schools, do a range of cultural diversity training.

"If we can see diversity as something positive, as something that can enrich a classroom, then we can get ahead," Mesa says.

Jenny Slagle, who was just elected to the Spokane Public Schools Board of Directors, has previously done work with the district to try to increase its teacher diversity. As someone who grew up on the Yakama Reservation without any teachers of color in her public school system, she says she'll push to implement a racial equity policy in the district once she takes her school board seat. She says she's encouraged by the diversity training happening within the district, but she'd like to see more of it.

"I think it needs to happen across the board, with administration and all teachers," she says.

It's crucial to emphasize that teachers can't just take one class and be culturally competent, says Flores, the state education official. It's a "lifelong journey" to understand their own biases and background and how that can influence teaching of culturally sensitive topics.

"I'm not disparaging all white teachers — many are teaching diverse and complex narratives," Flores says. "But there is something to be said about the lived experience of growing up in America as a person of color, helping not just students of color, but also white students." ♦