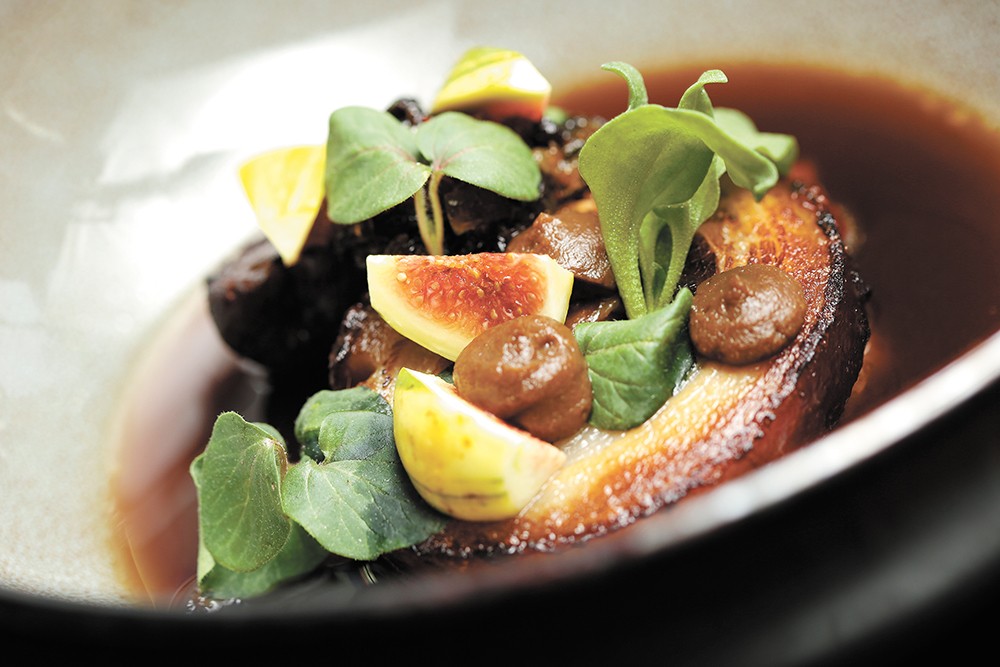 About the chef: Jeremy Hansen and his wife, Kate, opened their first of several Spokane restaurants back in 2008; Santé Restaurant and Charcuterie celebrates its 10th anniversary this fall. In the time since, the Hansens have also opened the Butcher Bar inside Santé, Common Crumb Artisan Bakery and Biscuit Wizard in Saranac Commons, Hogwash Whiskey Den and the experimental, upscale small-plates restaurant Inland Pacific Kitchen. Hansen was a 2015 semifinalist for the prestigious James Beard Award for Best Chef Northwest, among other accolades. In January of this year, the chef and a team of local cooks traveled to Puerto Rico to cook for citizens displaced by Hurricane Maria, a trip that inspired the founding of "culinary first responder" nonprofit, 509 Cooks.

"Whether it's random or themed [menus], there are a few things I think about. Balance is number one — balance in textures and flavors are my key things. Everything has to make sense. At the end of the day, I think about all of those things when I'm putting a dish together, but every dish is sparked through some kind of inspiration from anything, really."

The pancetta is served atop a bed of purple fingerling potatoes and baby carrots, which raise the spiral of fatty pork above a pool of rich fig consommé. The pancetta is topped with a dollop of bacon fig jam seasoned with black garlic, and small wedges of bright yellow-and-green striped tiger figs. The dish is garnished with green okra sprouts, ice plant leaves and droplets of fig puree.

How it's made: "We make pancetta at [Santé] all the time, and we always try and find different ways to utilize it. This one, I took it a step further and braised it in a coconut oil. So I have this salty kind of coconut thing, and I need to bring in something sweet and something crispy and something fresh."

The restaurant happened to have some figs on hand, Hansen says.

"We thought, 'Let's do a consommé with a sweet, seasoned broth.' When we cook this pancetta [in the broth], it brings the seasoning out of the pancetta and seasons the broth... the salt comes off and it's perfectly balanced."

Chef's thoughts: "It's almost like a sweet and sourish and salty [flavor]... And then you have this aged element, this braised element, and this fresh element. Clean flavors. It just really has everything in it. You've got this preserve jam, but then you have the freshness with it in the greens and also in the figs and in the crispiness of the seared pancetta. You get the texture of the clean broth and the pull-apart pork meat."

OUR thoughts: When eating this dish, my guest and I recalled something we'd heard chef David Chang say on 2012's The Mind of a Chef to the effect of a great dish should always remind you of something special; another meal or moment in time. This dish is reminiscent of a cozy, late Sunday breakfast at home of waffles, bacon and maple syrup, and that perfect experience of dipping a slice of greasy bacon in sweet syrup. The salty, savory pork pancetta — which falls apart and almost melts in your mouth — paired with the warm, sweet and also slightly salty fig broth, is nostalgic of a comfortable morning meal with loved ones, yet is simultaneously steps far above that in balance of flavor and texture. You'll want to savor each and every last drop of fig broth after the pancetta quickly disappears. Thankfully our server brought over a spoon, as I was tempted to put the bowl to my mouth to slurp up every last drop.

The original print version of this article was headlined "Balanced Approach"