Between Rocky and a Hard Place

A city attorney with a tough-guy reputation tries to strong-arm a lawyer into staying away from City Council members. 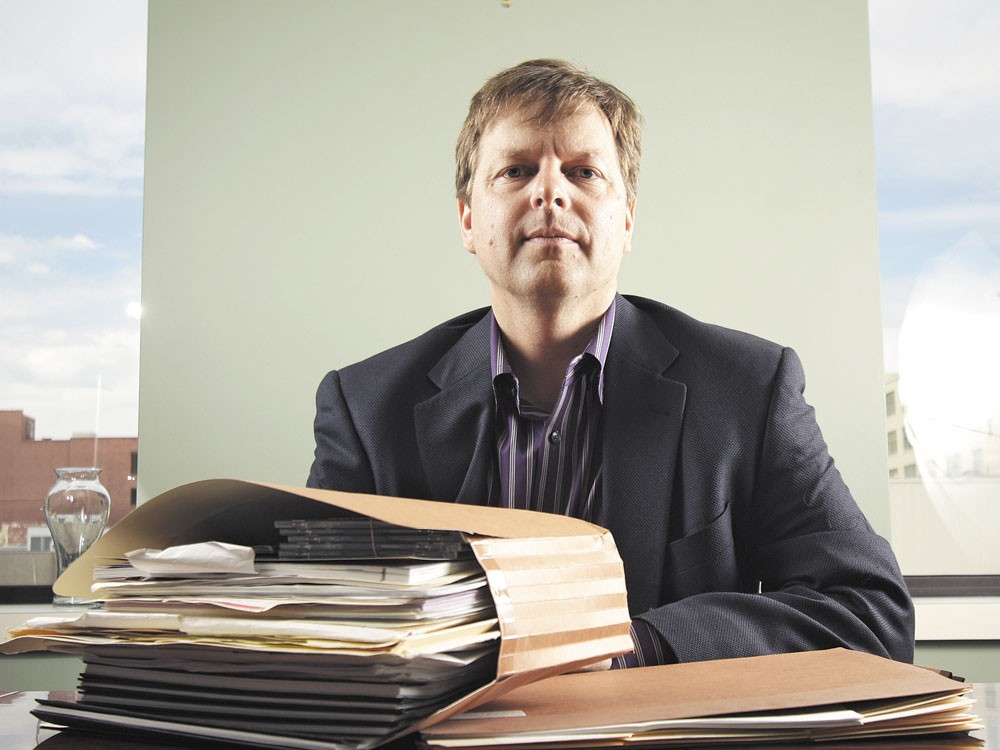 The letter said that Beggs — who had helped craft the legislation over the previous few weeks at the request of some council members — had spoken to the city’s elected officials “without my knowledge or prior permission. … Please cease immediately any and all contact with the City’s representatives, including elected officials … [or] I will have little choice but to forward this matter to the Washington State Bar Association as a formal complaint.”

• Read Beggs’ letter to assistant city attorney Mike Piccolo, informing him that Treppiedi has told Beggs not to communicate with city council members.

“The way I took it was twofold,” Beggs says. “Number One, we had been very successful in reforming the ombudsman ordinance and that some person or persons were not happy with that and so they were taking a shot at me. Secondly, they were trying to keep me out of the final negotiations.”

The ordinance passed unanimously, but this isn’t simply about the ombudsman, and it’s not just a spat between two attorneys. Some say Treppiedi’s letter is the latest volley in a long-running battle to keep the city’s business hidden from the public. Others call it an affront to the democratic process.

“I don’t appreciate a city attorney going out and telling me who I can and can’t talk to,” says City Councilman Bob Apple. “I’m an elected official. It’s my job to talk to people.”

Treppiedi — who did not return multiple calls seeking comment for this article, and said recently he would not go on the record with anyone reporting for The Inlander — has defended the Spokane Police Department for more than 20 years, and in those decades has earned a reputation for being intimidating and creating an environment that encourages police misconduct.

“If somebody goes out of their way to keep the city from being liable on everything — and forgets justice — he is a liability,” says Apple. “And if he’s going to speak for the council, he’s going to have some real problems.”

Still, not all city leaders expressed the same outrage as Apple.

“I’m not going to comment on this,” Councilman Jon Snyder said Sunday. “Other than to say I’m very upset that I’m hearing about this dialogue through the news media and not through my counsel at the city.”

Snyder — along with council members Richard Rush and Amber Waldref — was named in Treppiedi’s letter as having had “direct communications” with Beggs. Specifically, Treppiedi writes that Beggs has no right to speak to city leaders because of his involvement with the lawsuit against the city regarding the death of Otto Zehm. A confrontation with a Spokane Police officer led to Zehm’s death in 2006, and Beggs represents his family.

When the city was negotiating with Zehm’s family in 2007, one of the “non-economic demands” in the discussions was the creation of a civilian ombudsman with the power to independently investigate the police department. Even though the city is no longer in talks with the Zehm family, Treppiedi still considers this part of the case.

Waldref did not return calls seeking comment. Mary Verner, the latest mayor to oversee Treppiedi, declined to be interviewed for this article.

Spokane Police Guild President Ernie Wuthrich, however, says Treppiedi is “a pretty good guy” who takes his job very seriously — and does it well.

“I find Rocky to be very diligent in his duties and his responsibilities to the citizens of Spokane,” he says. “I wish everybody … took their responsibilities that seriously. I don’t think he does anything underhanded in his attempt to keep the city’s reputation intact.”

At a press conference arranged in part by Treppiedi soon after Zehm’s death, acting Spokane Police Chief Jim Nicks defended his officer’s actions leading up to Zehm’s being tasered, hogtied and his eventual death. For months, the Police Department kept up Nicks’ narrative, saying Zehm had “lunged” at or “attacked” Officer Karl Thompson.

A surveillance video released four months after the confrontation shows no lunging or attack on the part of Zehm. Instead, it shows Thompson running into the Zip Trip and taking Zehm down immediately.

Even after he saw the video himself, Treppiedi stood firm on the original, official line, saying Zehm fought police and his death was caused by a variety of factors, including the disputed medical term “excited delirium.” Thompson still faces charges of excessive force and his federal trial is expected to begin in March 2011.

It’s not the first time Treppiedi has been at the center of a drawn-out legal battle over police tactics.

In 1986, Spokane police searched the homes of Grover and Jimmy Marks. Eleven years of litigation later, the city paid the family $1.43 million after the courts ruled the search illegal and “greatly mismanaged.”

Treppiedi worked on this case over those years, searching the hotel room of a national CBS news team with nine police officers and seizing their footage of the Marks family in the process.

“I remember sitting in executive sessions and being amazed at the animosity. I was never very happy with Treppiedi’s work,” Sheri Barnard, Spokane mayor from 1989 to 1993 and one of Treppiedi’s early bosses, later told the Spokesman-Review. “I felt he was biased.” (In the same article, Richard Wall, a former Spokane County deputy prosecutor, had similar words. “He’s aggressive and single-minded about his job. It generates an atmosphere that encourages police misconduct.”)

The Marks case was an early example of the city’s long-standing and controversial practice of routinely countersuing people who file claims against the city. When the family filed a civil rights suit against the city in 1989, Treppiedi fired back, countersuing them under the federal Racketeering Influence and Corruption Organization Act.

Though the RICO charges were eventually thrown out by a judge, the city maintained its countersuit practice until just two years ago, when Verner officially — and quietly — put an end to it. Treppiedi helmed this controversial practice.

“My concern is this is the replacement,” Beggs says of the threat he received from Treppiedi. “That play of intimidation is still in the playbook. … If there’s a way to limit a person’s options in trying to reform police practices, this is a tool in the arsenal. … From my perspective, the intent is to limit involvement in government reform issues, especially if it’s related to police practices.”

In an official response Tuesday afternoon, the city indicated it stood behind Treppiedi’s letters to Beggs.

Beggs says that even though he knows he’s in the right, the letter had a “chilling effect.” He says he had to make a choice between exercising his rights, hiring a lawyer and defending himself, or “be quiet and not participate in a democracy, but ensure that I won’t have to hire a lawyer to deal with the ethics issues.”

Beggs says the ultimate solution is for those in power to stand up to Treppiedi.

“What it will take to end it is for the highest members of the administration — the mayor, the police chief, sheriff, prosecutor or anyone like that — to tell the people they supervise and control: Thou shalt not retaliate against people for free expression,” he says. “The antidote is not to try to shut people up.”