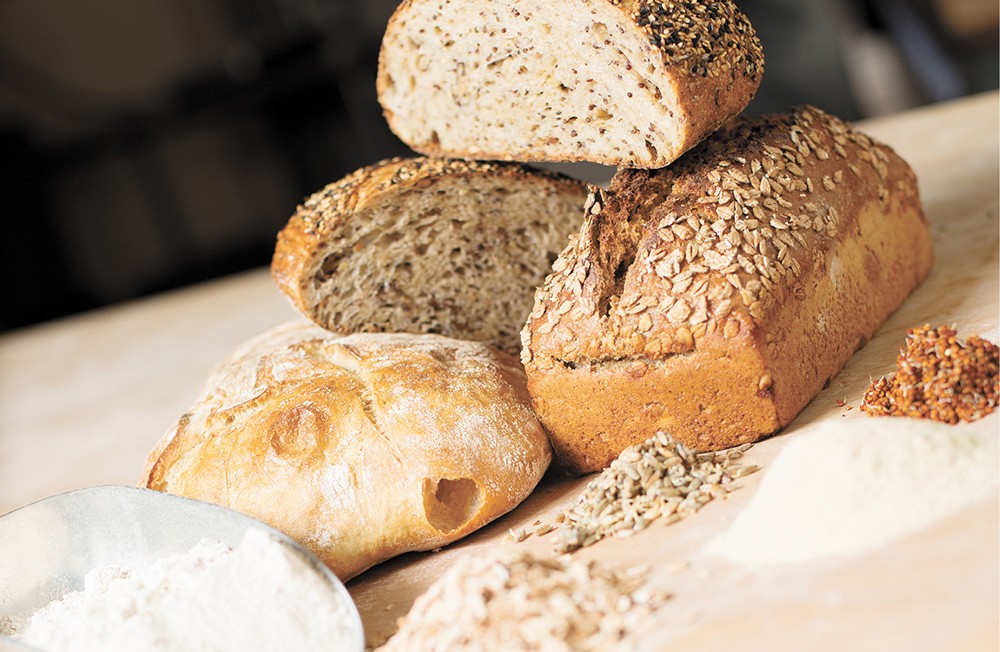 For the first few weeks

, Shaun Thompson Duffy wouldn't leave Rusty alone at the bakery overnight. He'd pack her back and forth each day, arriving around 4 in the morning for a day's work stretching into mid-afternoon.

Rusty was fussy at first, and it took Duffy some time to get her to take to the water here. She's fed twice a day — at 6 am, and then again at 2 in the afternoon. At 5 years old, Spokane is now the fourth city where Rusty has lived.

Rusty is not a child, nor a pet, but according to Duffy, "she" is nevertheless a living object. As a wild yeast sourdough bread starter, Rusty is the mothership for every loaf, bun, scone, bagel and croissant produced at Bouzies Bakery on Spokane's South Hill, where Duffy has been head baker since last November.

Contained inside a nondescript canning jar sitting in the middle of a large, wooden dough-rolling table, those unfamiliar with the science of breadmaking might never realize the significance of the mushy, tannish-brown mixture called Rusty.

"The starter is the reason for our bread," Duffy remarks. "It works the hardest."

On a rainy Thursday after the day's mixing and baking is complete, the small-statured, bearded breadmaker enthusiastically "nerds out" about the science of hydration, wild yeast bacteria, temperature, humidity and prolonged fermentation schedules.

From start to finish, some of the bakery's breads take nearly three days to produce. This is largely due to a 36-hour fermentation process, during which wicker baskets of formed dough sit on racks in a walk-in cooler.

"When you ferment [for that long], it breaks down a lot of those complex starches, and not only is that better for the flavor, but also the nutritional value and digestion," Duffy explains.

At 34, Duffy, a native Texan, has already racked up an impressive culinary résumé — he's cooked at starred restaurants in Houston, Las Vegas and Chicago — but it wasn't until 2007 that he became an ardent follower of traditional breadmaking techniques.

"We want to make the best bread ever and that's why we practice these traditions," Duffy says. "It's also better in flavor from a chef's standpoint."

Those traditions he's so eager to convert local consumers to go beyond his loyalty to leavening all of Bouzies' bread using the ever-multiplying sourdough cultures birthed from Rusty. Duffy is passionate about ancient grains — soft wheat varieties, rye, quinoa, and a trademarked strain of regional wheat called kamut, from Montana and North Dakota.

Ancient grains are genetically unmodified plants that have been cultivated since the beginnings of human civilization. All of the grain used in Bouzies' bread comes from regional farmers in Washington, with the exception of the kamut and some white flour grown in California. Duffy adds that as a newcomer to the region, he's always on the lookout for new local growers to source grains.

While Rusty works hard every day

to multiply her sourdough yeast, leavening countless loaves and baguettes, breadmaking at Bouzies will reach an even higher artisan level sometime next month. Mid-March is when a long-awaited Austrian stone mill is expected to arrive after a long trip across the Pacific to the Port of Seattle, and then across the state to its final destination. Duffy expects they might have to bust down the front wall of the converted house just to get the mill inside the bakery. The $10,000 piece of equipment, made entirely of Austrian pine except for its two granite millstones, ships as an assembled unit. Duffy says it was purchased for Bouzies by previous owners William and Marcia Bond, who recently sold the bakery and next-door restaurant Luna to local restaurateurs Aaron DeLis and Hannah Heber.

As excited as Duffy is to introduce Spokane to his traditional philosophies, his joy at being the first bakery in the state to have its own Austrian flour mill is unmatched.

He's seen the qualities of fresh-milled flours firsthand, working most recently for Tabor Bread in Portland before relocating to Spokane last fall due to his wife's job.

"Milling your own flour is one of the greatest things you can do," Duffy asserts. "This is a trend in baking that sets you apart, but also for the health benefits and the flavor."

Most commercial bread — like the pre-sliced pan loaves from the grocery store — is made using hard red winter wheat, Duffy explains.

"Before the Industrial Revolution, there were all these different wheats — softer wheats — but they couldn't hold up to machine harvesting, so we moved to hard red winter wheat, which has a higher yield and can withstand harvesting machines, and is primed for roller milling," he says.

When these harder wheats are milled into flour, the shell — or bran — breaks off during milling and just the endosperm of the grain is crushed into flour. But when softer wheats are crushed in a stone mill, the entire wheat berry is pulverized together, including the bran, the endosperm and the germ oil. He likens these three components to an egg: the bran is like the shell, the endosperm is the white, and the germ oil is the yolk, which contains the most flavor and nutrients.

Aside from milling all the flour used in Bouzies' breads, Duffy plans to sell freshly milled, locally sourced flour at area farmers markets alongside the bread.

"I think in the next couple years there will be many more bakeries milling their own flour and practicing long fermentation," Duffy predicts. "They're going to have to — it's going to be that popular." n