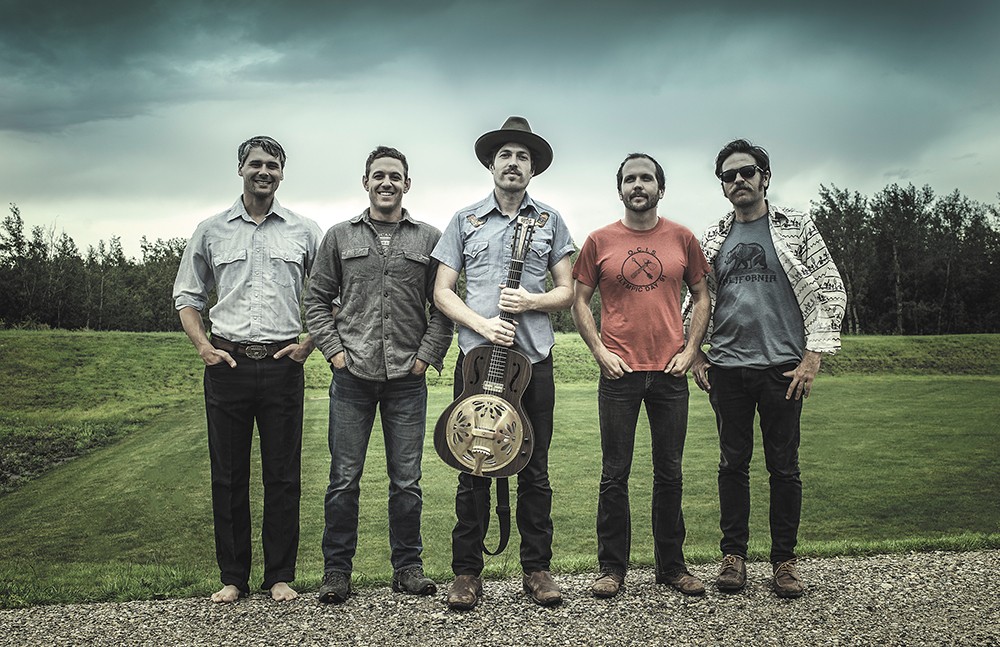 Like young artists in any genre, bluegrass-tinged quintet the Brothers Comatose

are learning that to navigate the music biz in 2017, they have to be increasingly creative and light on their collective feet.

That means recording and releasing new songs as they're written, rather than gathering them for months for a traditional album release. That means creating impromptu concerts in unexpected places, as captured in their "Elevator Series" of videos, in which they cram into mall lifts and jam for unsuspecting shoppers. And it means touring in places like the Pacific Northwest, where bluegrass isn't necessarily as common as it is in the Deep South or Colorado's acoustic-obsessed Front Range.

Singer/guitarist Ben Morrison, who formed the Bay Area band along with his banjo-picking brother Alex, is quick to note, though, that the Brothers Comatose have had some memorable gigs, if not necessarily traditional bluegrass hoedowns, in Spokane. When the Brothers Comatose first came through town a few years back, their friends in the Devil Makes Three steered them to Neato Burrito.

"It was the most punk-rock show we've ever played," Morrison says. "Just people sweating, dancing, in your face, just screaming at you. So cool." Later shows at the Bartlett were just as fun, if a little less mosh-happy, Morrison adds. "People come out and rally and party in that town."

This time around, the party is in part to celebrate the band's new EP of covers, the cleverly named The Covers, Vol. 2. Like other aspects of the Brothers' career trajectory, the set includes predictable pleasures as well as surprising successes. The predictable: stellar covers of Ryan Adams' "To Be Young (Is to Be Sad, Is to Be High)" and Hank Williams' "My Bucket's Got a Hole in It." The surprises? A high-energy version of Cake's "Stickshifts and Safetybelts" and, bizarrely, a sparse, almost bluesy take on Huey Lewis and the News' "I Want a New Drug."

"I loved Huey Lewis when I was younger. I had a Huey Lewis tape that was the first tape I ever bought," Morrison explains. "It's such a funny idea for a song, and we thought musically it would translate well."

It certainly makes an impression, and through some hometown connections — Lewis lives part-time in the Bay Area — Morrison was able to get a copy of the Brothers Comatose version to the man himself.

"He responded within, like, two hours, saying something like, 'I love the cover, I'm sending it to all the guys in the band,'" Morrison says. "And then they ended up posting it on their Facebook page and tweeting about it. It was like, dude, my childhood dreams coming true right there."

Not your typical dream for a bluegrass-picking frontman, but pretty normal for the unusual mode of the Brothers Comatose. ♦