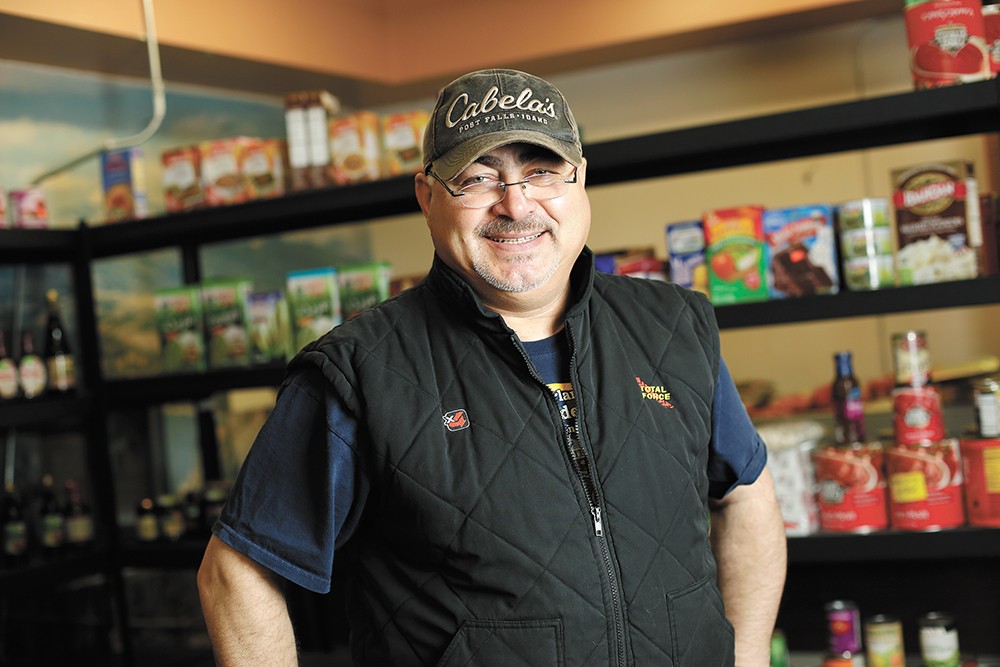 Young Kwak
Zein Chreiki came to the U.S. from Syria 28 years ago.

On shelves pushed against the shop's front windows are rows of secondhand shoes, microwaves and other small kitchen appliances, and a few sun-faded boxes of Christmas decor.

To one side of a blinking neon "open" sign for Spokane Liquidation, which is also home to Spokane Halal Food market, is a kitschy Santa wreath. On the other, a witch astride her broom is silhouetted by a yellow moon. Taped to the glass beneath this conflicting decor are several posters advertising halal-certified packaged foods: TV dinners, frozen meats and other items.

When new customers step inside what they've been told is a Middle Eastern market, located on North Monroe Street next to a plasma donation center, they may be confused as to whether halal food is actually sold here. The market portion of Spokane Liquidation, owned by Syrian-American businessman Zein Chreiki, is off to the right of the entrance and through a doorway by the cashier counter.

There, tall shelves are modestly stocked with shelf-stable packaged goods: spices, lentils, bulgur, tahini, noodles, falafel mixes and more. A low freezer case in the back of the room is half-filled with whole frozen chickens and a few racks of lamb. All of the meat for sale here is halal, which means the animals were slaughtered in a method prescribed by traditional Islamic law.

Translating from Arabic as "permissible," halal slaughter requires an animal be facing Mecca, and to have its throat swiftly cut with a sharp blade while invoking the name of God, or Allah. Shooting an animal is not an acceptable method of slaughter under Islamic beliefs. Pork is also prohibited for consumption, and all blood must also be drained from slaughtered animals' veins before consumption. Alcoholic beverages are also not halal for practicing Muslims.

Many Muslims, like Chreiki, also consider halal meats to be healthier and more tender than meat slaughtered and processed by non-halal, commercial methods.

"For example when you get the cow, the American way is they shoot it in the head here," Chreiki explains as he points to his forehead, "and let them down. But from the time they kill it, the blood is clotted in the muscles of the meat, and it's not tender and doesn't taste right. The Islam way is [cut] the neck and hang [the animal] upside down for sometimes an hour or more, and all the blood comes to the ground."

Chreiki immigrated to the U.S. from Syria in 1990. Before opening Spokane Halal Foods, he worked in patient transport for Providence Sacred Heart Hospital. Then, 10 years ago, Chreiki partnered with a friend to open Spokane Liquidation, which sells used and new, liquidated products including appliances, furniture, clothing and other household goods.

"I did the same thing for 10 years, and then at the time more [Syrian] refugees started coming to this country, and they started asking for halal food and meat, and that is when I opened one section here in my building," he says.

Spokane Halal Food, which is also known as Monroe International Foods & More, opened about five years ago. Business in the first few years was good. Chreiki says he was one of the only markets in Spokane selling halal-certified products and other Middle Eastern ingredients not carried by traditional U.S. grocery chains.

Things have slowed down quite a bit since then. Now, there's competition from those chains, which often sell at lower prices than Chreiki can afford to price his goods.

"Now most of the big companies sell halal — Costco, Winco, Cash & Carry — so the business is not the same," he says. "Most of the Arabic people, when they first came, they didn't have transportation... now everyone has a car and they choose where they want to buy their stuff."

At those big chains, families are able to buy halal foods in bulk at lower prices. In addition, Chreiki says other small, local halal markets have since opened across the region area, creating more competition. Since food is not leaving shelves of his market quickly enough, he's recently pulled back on how much inventory he keeps on hand.

These changes have pushed Chreiki to consider if he even wants to continue operating the market. In addition to the liquidation outlet, he also sells used cars and might transition to that venture full time later this year.

"The business is not good anymore," he says. "There are too many stores open in this city. People used to come from Cheney and Pullman and Moses Lake just to buy stuff. Now they're spreading out everywhere." ♦