Surfer Blood frontman J.P. Pitts discusses the beauty of not overthinking it, and working through personal loss 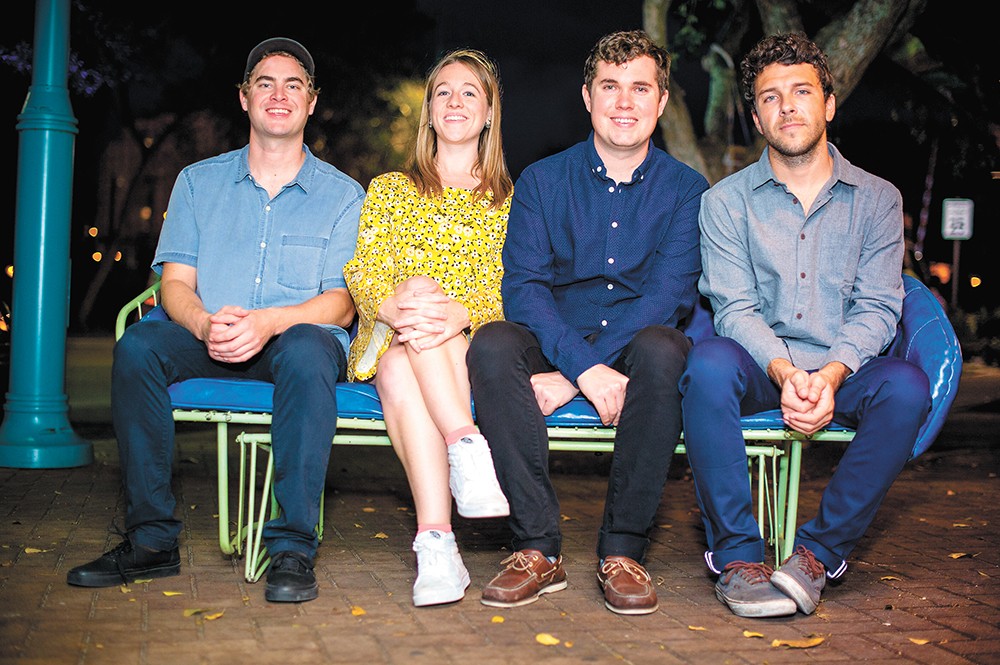 Surfer Blood's most recent album is the sunniest, poppiest collection of songs the band has released in years,

bursting at the seams with winding guitar hooks, grooving basslines and instantly hummable melodies. Upon first listen, it's an ideal summertime record.

And yet the very iciness of its title, Snowdonia, and cover image — a glacier the size of a whale jutting from the surface of a placid ocean — suggests a different feeling altogether, a reflection of the emotional turmoil that was happening behind the scenes as it was being made.

Following the release of the Florida band's 2015 LP 1000 Palms, longtime Surfer Blood guitarist Thomas Fekete passed away from the sarcoma that spread to his lungs and brain, and frontman and songwriter J.P. Pitts' mother was diagnosed with cancer. All of this no doubt influenced the music: Dip beneath the sunny surface and Snowdonia, like the body of water on its cover, is often cold, dark and enveloping.

Speaking from the band's tour van as they're en route to Texas, Pitts asserts that this is nothing new: His music has always flirted with darkness, he says.

"People seem to call [Snowdonia] an uplifting and optimistic record, but I've never been one to write anything too pessimistic, or to dwell on anything negative for too long," Pitts says. "I don't know, I think there's a difference between being emotional and bittersweet and being sort of indulgent, and I don't think we've ever flirted with that. There's always been a lot of moodiness in our records."

"Matter of Time" opens Snowdonia with an irrepressible burst of power pop, and its next few tracks continue the trend. But midway through the record is the nearly eight-minute title track, a twisty, slow burner announcing the darker tone that defines the album's second half. "Carrier Pigeon," which imagines a kid losing his way in a crowded shopping center, closes the album on a note both harrowing and hopeful.

"In a bloated universe we're lost," Pitts sings. "Try and find my way in the dark / But we can't even see who we are."

"There definitely are some songs on this record that are very poppy, very ELO-inspired," Pitts says. "There are also some of the weirdest songs we've ever written, and some of the longest and most meandering. But I also wanted to write songs that were easy and fun and cathartic to play — simple, three-chord pop songs."

Surfer Blood's roots are still in Florida — three of its four current members reside there — though Pitts has lived in California since the band recorded its second album, Pythons, in L.A. He's now in the Bay Area, having followed his girlfriend there after she was accepted into law school at UC Berkeley. It's a somewhat unusual arrangement: Pitts writes on one side of the country, then flies back to Florida to work through the new songs with the rest of the band.

"It's probably not the ideal situation, but we've made it work for a few years," Pitts says. "I've got a lot of frequent flyer miles."

The band's current four-piece lineup — alongside Pitts is guitarist Mikey McCleary, bassist Lindsey Mills and original drummer Tyler Schwarz — has really clicked into place, Pitts says. Surfer Blood's live shows are slightly more stripped-down than the lush, harmony-heavy production of their records, which is actually closer in style to what Pitts has wanted the band to sound like all along.

"It can be a challenge, but adding more things isn't necessarily going to make it better," Pitts says. "We've been working hard getting all the harmonies right, which is something new for us. ... When this band first started, [the goal] was Beach Boys-style harmonies and overlapping vocal parts over a guitar-rock band like Pavement or something. In that sense, we're about as close now as we've ever been."

As Surfer Blood enters into its newest chapter, Pitts says he's still guided by Fekete's confidence as a musician and songwriter. And even though the late guitarist doesn't appear on this new record, his influence is still felt.

"For every time I was a perfectionist about a guitar tone, he was always the one there saying, 'I think you're overthinking it. Just move on with it.' I still hear his voice in the back of my head," Pitts says. "He had such an important role in shaping what I thought was musically good and interesting. He really expanded my mind in that way so much that I feel like he's a part of everything I'll do forever.

"Now I just think about things differently, and that's from absorbing his sensibilities." ♦