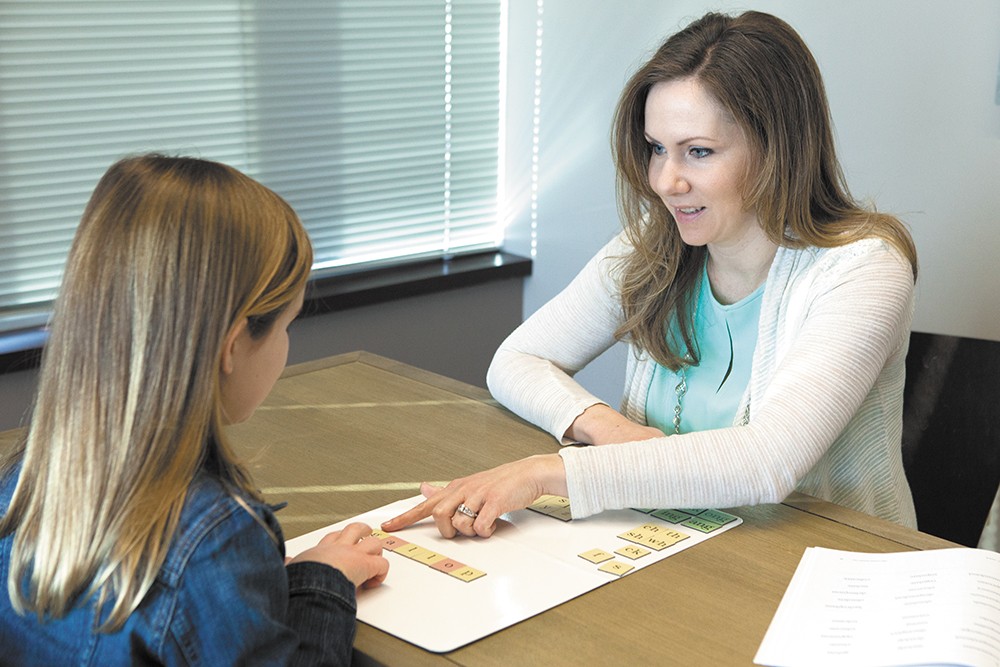 When speech language pathologist Wendy Popa learned that her own child had dyslexia,

she also discovered there was a dearth of evidence-based treatment available in the Inland Northwest.

A fortuitous meeting with Dr. Thomas Beck, an ADHD specialist, revealed their shared vision of expanding services to those with learning and attention disorders — which often go together — and led to the opening of the Winston Center in Spokane in February 2015.

Poor spelling and language decoding abilities are the hallmarks of dyslexia, according to the National Institute of Child Health and Human Development. These troubles exist even though many children with dyslexia have average or above-average intelligence. In dyslexia, "the areas (of the brain) in charge of processing language aren't as well developed, or are not processing as well as a typical brain," says Popa. "They're sort of processing the information differently."

Popa helps kids compensate by stimulating multiple learning pathways — seeing, hearing, feeling and awareness of motion. For example, a student might see the letter A, say it out loud, and draw it in sand. "We're experiencing the letter by feeling it," she says. "Where do we start our letter? Where do we end our letter? That can be very difficult for them."

Her students first read and write sounds in isolation, then blend those into syllables and words, and eventually move on to building vocabulary, understanding sentence structure and writing composition, and developing their ability to comprehend what they read.

"In this approach, we're targeting both the reading and spelling components simultaneously, in the same lesson," she notes.

Dyslexia is a neurobiological disorder — not a problem with vision or hearing — and recent advances in imaging techniques have offered better insights into brain function in those with dyslexia. In particular, the planum temporale — a triangular portion of Wernicke's area, which is one of the most important language centers of the brain — is typically bigger on the dominant side of the brain. But in children with dyslexia, it's the same size on both sides.

Dyslexia often runs in families, and several genes appear to be associated with reading and language processing issues.

Kerry Jensen, a Liberty Lake mother who has three children with dyslexia, helped launch Enlighten: Dyslexia Understood, a local nonprofit that aims to promote public awareness, improve public education, and provide support for families with struggling readers. Although teachers are usually eager to help, Jensen says they often haven't been equipped with the right tools, and many dyslexic students are "falling through the cracks."

"I know that for most parents, it's very frustrating," she says.

Following the success of a statewide pilot reading program that included Trentwood Elementary, legislation was passed in 2009 to improve dyslexia instruction. Although the law resulted in the creation of a dyslexia resource guide by Washington's Office of Superintendent of Public Instruction — which Jensen calls a "consolation prize" — the legislation wasn't funded. Without intervention, "things don't get better, you don't grow out of it," says Jensen.

Unfortunately, many children with learning disorders don't qualify for special education, and insurance often doesn't cover learning disorder assessments, which are considered to be educational in nature, not medical, leaving dyslexic children in limbo.

"It's outrageous," says Spokane neuropsychologist Angelique Tindall. "They need to provide the coverage to do these evaluations. It certainly impacts education, but it impacts livelihood, it impacts quality of life. It's a health and wellness issue." Many children with dyslexia often suffer anxiety, depression and shame, due to struggling day after day in the classroom. "It's extremely, extremely stressful," Tindall notes.

She suggests that parents who suspect their child has a learning disorder talk to the child's teachers, then see if the school psychologist can administer a formal test. If not, parents can ask their child's primary care provider what other resources are available.

"Always be an advocate for your child," Tindall said. "Number one, that's what I tell parents."

Popa says that, along with seeking the right intervention, parents' encouragement and support is key.

"I think it's really important for kids to understand that they are significant, they are important, and they can contribute to our community," Popa said. "I think that, a lot of times, helps develop that resiliency and encourages them to keep trying, to keep on going, when things get hard." ♦

Does your child have dyslexia?

Warning signs in preschool or kindergarten

♦Struggles to match letters to sounds, such as not knowing what sounds the letters "B" or "H" make;

♦Has difficulty blending sounds into words, such as connecting C-H-A-T to "chat";

♦Struggles to pronounce words, like saying "mawn lower" instead of "lawn mower";

♦Has trouble learning to count or say the days of the week and other common sequences;

♦Confuses the order of letters, such as writing "left" instead of "felt";

♦Has trouble remembering facts and numbers;

♦Has difficulty gripping a pencil;

♦Gets tripped up by word problems in math;

♦Has a hard time sounding out unfamiliar words;

♦Has trouble following a sequence of directions.

♦Struggles with reading out loud;

♦Has trouble understanding jokes or idioms;

♦Struggles to summarize a story

♦Has difficulty learning a foreign language