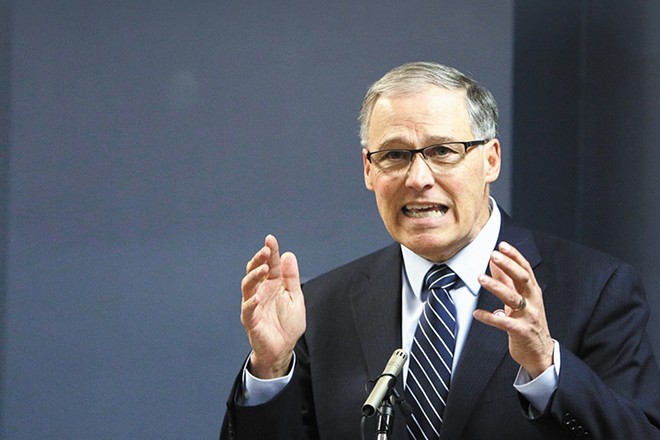 Young Kwak photo
Washington Gov. Jay Inslee's approval ratings have had a big boost since his response to the coronavirus.
Washington state and Idaho are very different states, if you haven't heard.

Their response to the coronavirus has been different too, with Idaho Gov. Brad Little locking down Idaho far later than Washington state Gov. Jay Inslee and loosening restrictions much more quickly.

But according to a new poll, they share something in common: In both states, 67 percent of their residents gave their respective governor a thumbs-up grade for their response to the coronavirus. The SurveyMonkey online poll surveyed more than 120,000 adults across the country, and weighted the sample to reflect age, population density, race, and education levels in each state.

Since the polling was conducted between April 30 and May 13, it gives us a taste of how residents in both states have responded to Little's decision to start opening up, and Inslee's comparative reluctance.

In both states, the fight to slow the spread of the virus has shown remarkable progress. The first examples of COVID-19 cases in the U.S. being identified came from Washington state, as horror stories of deaths in a Kirkland nursing home riveted the nation. But today, the numbers are low enough to put the state's per-capita number of total infections in the bottom half of the states.

And Idaho? Despite being on the border of Washington state, Idaho has the ninth least per-capita number of cases in the nation. While differences in testing supply can radically skew the numbers, the evidence remains: Washington state and Idaho have escaped the nightmare scenario plaguing states like New York and New Jersey.

A vocal band of protesters in both states have been furious about the dramatic measures their governors have taken to combat the virus, alleging the damage to the economy and
liberty has been too steep.

But those supporting the stay-home measures are more likely to, well, stay at home, giving an inaccurate sense of how the public feels about the measures. Young Kwak photo
While Eyman points to a recent web poll on the Tacoma News Tribune website for proof of public backlash against Inslee's stay at home orders, more rigorous polling suggests Inslee still has majority support.
In recent weeks in Spokane, however, local leaders have been increasingly critical of Gov. Inslee. Spokane Sheriff Ozzie Knezovich, a Republican, condemned the governor's ongoing stay-home order as "draconian" and charged that the governor is "either blind or doesn't care about the economic epidemic that's coming."

Even Spokane's state Rep. Marcus Riccelli, the House Democrats majority whip, joined the band of leaders — including the local health officer — who urged that Spokane should open up sooner.
"There's some sort of middle ground that we're not striking in Spokane County, that we can get to that is safe," Riccelli said earlier this month. "I haven't been super public about it, because I've been trying to work behind the scenes with the governor's staff."

"That's just completely irresponsible when you have people's entire livelihoods on the line," Richard says. "We believe the governor needs to treat us with more respect and honor his own word and manage this using the data."
But this week, Inslee did layout a new standard, announcing that Spokane had a slow enough infection rate to allow it to apply to move to stage 2 early. And it's important to recognize that the voices of business owners, raring to reopen, don't always match the views of their employees.

A recent public records dump of complaints accusing nonessential businesses of defying the governor's stay-home order reveal that a significant number of the complaints come, not from finger-wagging neighbors or frustrated competitors, but from many of the accused businesses' own employees.

"I am being forced to use my [personal time off] to stay compliant with the ban and safely take care of my daughter who has an autoimmune disease," one local Spokane employee complained.

"Employees have tried to reason with them," another complainant alleged about a company, charging their management "doesn't care about them or their health, quarantine, or anything going on around them! Please help us."

In fact, a SurveyUSA poll, conducted over the past week on behalf of KING 5, found that only 19 percent of Washington state respondents said that the response from state health officials to the coronavirus has been an overreaction and only 15 percent said that Washington's stay-home order should be lifted immediately. Most supported a modified order, with some parts of the state opening up before others.
It's possible, of course, that Inslee's approval rating has lost ground recently. His approval rating on his coronavirus response isn't quite as high as the 75 percent of respondents to an Elway poll conducted a few weeks earlier, a supermajority of residents still appear to support him.

But as for Inslee opponent Tim Eyman's claim to the Inlander that "the people, regular voters, are just spittin' mad right now"? There's not much proof of that right now.

In fact, the SurveyUSA poll found that, in the span of 10 weeks, Inslee's net job approval rating in Washington lept by 28 points.
click to enlarge


In Idaho, you have legislators like Heather Scott calling Gov. Little, "Little Hitler." You have Little's own Lt. Gov. Janice McGeachin proudly appearing at the openings of an Idaho bar defying the governor's order, and writing op-eds saying that, "I lose sleep at night because the heavy hand of our government is hurting so many Idahoans."She and Little haven't spoken in three weeks.
And you have groups like the influential Idaho Freedom Foundation leading "Disobey Idaho" rallies, urging residents that they "have to disobey" the governor's orders.
Interviewed by the Inlander last month, before Little began reopening parts of Idaho, Idaho Freedom Foundation's Wayne Hoffman gave the governor a mixed review.

"I've found his staff to be very accessible. We've had very candid conversations all throughout this. And that's been a refreshing change from his predecessor," Hoffman said. "Where I have a criticism is that he's being led by the health experts. And I think he needs to do more to weigh the economics and his constitutional obligations as he considers health matters."

Hoffman's argument was primarily one about liberty and the economic impact, rather than a medical calculation. Asked if he believed that COVID-19 is more dangerous than the flu, Hoffman said, "I have no idea."

"COVID-19 could kill you, but the government's actions could also kill you," Hoffman said. "We know when it's COVID-19, but do you know when it's a person who put a gun to their head and pulled the trigger, because they were upset about what's happened to them financially?"

Hoffman has been arguing that Little should have approached the virus with the lighter touch that places like South Dakota have employed.

But today, the percent of infections in South Dakota and Iowa is more than three times than in Idaho — though South Dakota's death rate remains low. In Arkansas, where residents did try to shelter in place, the numbers have been relatively low, but have rebounded recently. And Sweden? It's done better overall than hotspots like the U.K. and Italy, but far, far worse than its Scandanavian neighbors like Norway. Over the past week, it's had the highest number of deaths per capita in Europe.

Still, Hoffman argues that Sweden's "herd immunity" strategy will pay off in the long run. And conservatives have been happy to point to the example of Florida, where the predictions of doom and disaster after Gov. Ron DeSantis began opening up the state have so far failed to manifest. Yet for all the influence that the Freedom Foundation's arguments have had on the Idaho Legislature over the years, the influence they have on the Idaho public is a little shakier. After all, the Freedom Foundation and the Legislature fought tooth-and-nail against Idaho's Medicaid expansion initiative — but over 60 percent of the voters approved it.

"Since you can’t play to the middle well in Idaho, the Legislature tends to be more extreme than the electorate is," says Moscow-based Sen. David Nelson, one of Idaho's rare Democrats.

The positive polling around Little's coronavirus response appears to bear that out.

And lately, even some fairly conservative legislators, like Idaho Sen. Greg Chaney, have been pushing back against the Freedom Foundation and McGeachin, referring to them as manipulative "snake oil salesmen."

Chaney, like the majority of residents who were recently polled, argued that Little managed to get it right.

"Everybody could always say, we should have moved earlier, we should have moved slower," Chaney told the Inlander last month. "I think that Gov. Little did his best to find the precise point. He's been careful to follow the advice of experts that he's assembled to advise him on the science and the economics."

Chaney expressed sympathy for the constitutional concerns expressed by protestors but argued that even if you legally can take risks with your health, that doesn't mean you should.

"Look, you can believe — and maybe I'll agree with you — that the government has no right to tell you that you're not allowed to drink bleach, but that doesn't make drinking bleach is a good idea," he said.
Chaney said this not knowing that, just hours after the interview, President Donald Trump would stand up and muse about the possibility that an "injection" of disinfectant could be used to knock out the coronavirus, nor that the company would soon force Lysol to put out a warning that, no, they shouldn't drink bleach. (Trump later attempted to argue that he was being sarcastic.)

And that segues to another discovery from the SurveyMonkey poll: As much as people praise their governors, they sure aren't impressed with the president. Only 43 percent of respondents gave Trump a solid rating for how he's handled the coronavirus — lower than every governor in the country but Georgia's.