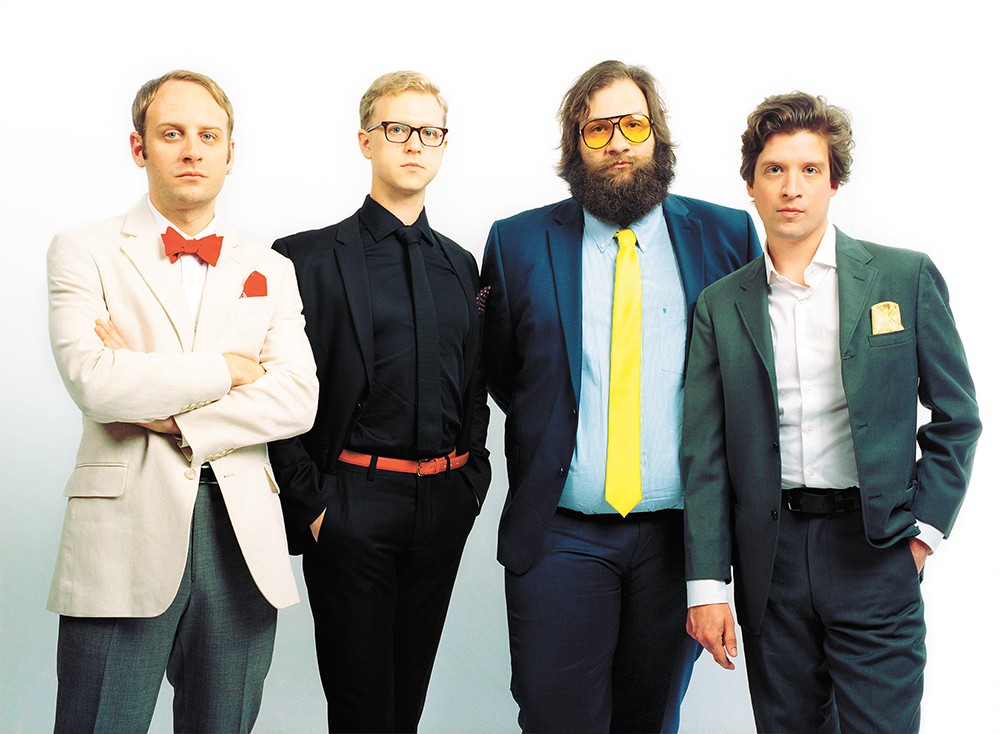 Laura Partain
Deer Tick hits Spokane for the first time with two new albums in tow — one acoustic, one electric.

Deer Tick has always been a tricky band

to pin down, genre-wise.

The Rhode Island-bred quartet started off rooted in folk and country-blues, but lead singer John McCauley never had any twang to his cigarette-and-whiskeyed rasp. Soon after forming, the band was dropping Nirvana covers next to its Hank Williams takes, Replacements tunes next to John Prine interpretations. And their originals on early albums like their 2007 debut War Elephant were similarly — and joyfully — bouncing between heartfelt acoustic balladry and rambunctious electrified rockers.

That dichotomy made for some thrilling moments through the years, but guitarist Ian O'Neil says the band's diverse sonic dalliances made creating cohesive records a particular challenge. That's partly what inspired Deer Tick to deliver two new albums in September, the all-acoustic Deer Tick Vol. 1 and the electricity-infused barnburner Deer Tick Vol. 2.

"We want whatever we do to be really consistent," O'Neil says. "Not that it's necessarily a fault, but something we were sort of getting tired of doing was trying to piece together albums with a lot of songs that sound really different from each other."

The decision to make two new albums, Deer Tick's first recordings since 2013's Negativity, was partly inspired by an acoustic tour they undertook following their first extended break as a band. After a triumphant series of 10th-anniversary shows at the end of 2014 — they performed full albums by some of their influences, including Lou Reed, NRBQ, Devo, Elvis Costello and the Beatles — McCauley, O'Neil, drummer Dennis Ryan and bassist Christopher Ryan went off separately to work on side projects (O'Neil's band Happiness played at the Bartlett a couple of years back).

And when Deer Tick got back together, they returned with new marriages and children in tow, a dramatic change for the hard-partying crew.

Their 2016 acoustic tour thrilled longtime fans who missed the band's folky roots, and gave the foursome the idea to write new songs with two distinct albums in mind — collections where they could focus on the band's different skill sets. Of course, they had to sell the idea to their record label and management before the two-album idea became a reality.

"You have people working for you, they're loaning you a bunch of money and they're going to have to sell two albums," O'Neil says. "We had to justify it with the quality of the songs, and pull it off correctly."

They did just that, creating two fine additions to a catalog that's turned Deer Tick's fans into some of the most obsessive in modern rock; their Spokane show sold out weeks in advance, despite their never having played here before.

Deer Tick Vol. 1 delivers songs that evoke their early acoustic excursions, with some of McCauley's best lyrics on songs like "Sea of Clouds," "Card House" and "Only Love," a beautiful tune in which he tries to capture a seemingly incongruous mood with his lyrics — that of the last 24 hours in a relationship before it falls apart. Deer Tick Vol. 2 brings insistent riff-rock like the urgent "Jumpstarting," and O'Neil wrote and sings "Look How Clean I Am," an indictment of celebrities who use sobriety as a marketing ploy.

The guitarist said the band made some changes to their typically laid-back approach when they headed to Memphis' legendary Ardent Studios to record.

"We had some rules, like, 'John and Ian only play acoustic instruments on the acoustic record,' and 'You can't sub in a reverbed-out guitar to try and smooth something out,'" O'Neil says. "Also, 'Only Deer Tick members play on these records.' There's no guests, no horn sections that come in. We've always had some friends or guests come in, because we're pretty loose people. I think having those rules in place made everything very simple for us."

The vibe at Ardent Studios helped, too. Managed by Big Star drummer Jody Stephens, it has hosted sessions by the likes of Led Zeppelin, Isaac Hayes, R.E.M., Cheap Trick and the White Stripes during its storied history, but there's not a lot to do there, says O'Neil.

"You feel like you're making a ZZ Top album in the '70s," he says with a laugh. "A lot less cigarette smoke, but there are still ashtrays built into the wall. It's got an incredible vibe, and it's very focused ... You feel lucky to be there."

Deer Tick is doubling down on its acoustic/electric approach on this tour. The first half of the show will be all-acoustic, the second half will be electric, and the band is going to tweak older songs into one of those formats to play alongside the new material. In lieu of an opening band, they're bringing along stand-up comedian and former Daily Show producer Jena Friedman as opener and emcee.

It was natural to divide up the show, at least for this tour, O'Neil says, since "old fans want to hear our older music, or new music that's pretty quiet, but it didn't always work out to slip that in between a bunch of loud punk songs.

"It's good for us, too, because right when you get off stage, a lot of the time you're really excited and you have a lot of adrenaline and want to get back out there," O'Neil says.

"Now when we get off stage, we go to the bathroom or have a cigarette, and then get back on stage and play even more technically revved-up, exciting live rock and roll. It's kind of an exciting trajectory for us." ♦