has never been a firebrand. She's risen in Republican leadership by hewing close to GOP talking points. She's been responsible for very few — if any — surprises during her 12 years in office.

The opposite is the case for the first four men vying to replace her: They're among the brashest — occasionally the most incendiary — politicians in Spokane County.

Last Friday, several prominent newspapers reported that McMorris Rodgers was likely to be President-elect Donald Trump's pick for Secretary of the Interior. No official announcement was made, and by Tuesday afternoon, media outlets began to report that Montana Rep. Ryan Zinke was now favored. (Even if Zinke gets the Interior post, McMorris Rodgers, as a high-ranking Republican, could conceivably join the Trump adminstration in a different role.)

Despite the uncertainty, within hours of the reports on Friday, the local political landscape was in upheaval, as many of Spokane's biggest names began campaigning to replace McMorris Rodgers.

First, there's City Council President Ben Stuckart, who, amid a scandal involving public records during the past year, accused Mayor David Condon of "blatant lies" and demanded that members of his administration resign.

Next, there's Michael Baumgartner, an influential Republican state senator who gleefully trolls liberals on Twitter with tweets like the one calling the Washington State Supreme Court "mushy-headed" puppets of the teachers union.

Then there's county Sheriff Ozzie Knezovich, who's given long public lectures arguing that many critics of police — including media outlets — were dishonest and are making the world a more dangerous place.

Finally, there's Washington state Rep. Matt Shea. Reporters from local publications couldn't even directly see Shea's announcement on Facebook — he'd long ago blocked them. Shea uses the press as a foil, slamming the local media — he refers to them with names like the "In-Slander" and the "Socialist-Review" — to cheers from his crowds.

Outgoing Republican state Rep. Kevin Parker said he was "seriously considering" a run, after his kids recently told him they were supportive.

Each of the first four declared candidates for McMorris Rodgers' seat are brawlers, eager to leap into the ring and let their rhetorical punches fly.

On Friday, Baumgartner summed up the developing race by tweeting a screencap from the battle-to-the-death Hunger Games series: "Let the games begin. May the odds be ever in your favor."

Stuckart had planned to be mayor. In April, he officially filed — for a race that wouldn't be held for three years. He told the Inlander that he wouldn't change his mind unless something drastic happened.

But even before Donald Trump was elected, Stuckart had changed his mind. His talents and experience, he now says, are as a legislator, not an administrator. 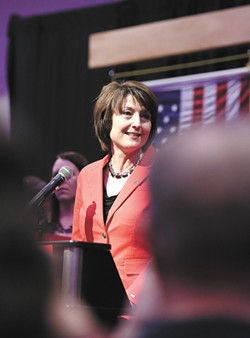 "I will definitively not be running for mayor in 2019," Stuckart says. Trump, and his "super-partisan cabinet appointments," just settled it. Local issues seemed less important to him than the fight against Republican proposals to gut Social Security or voucherize Medicare.

Stuckart says he wants to tackle poverty and income inequality at a national level. He wants to improve agricultural policy.

Even if McMorris Rodgers isn't appointed by Trump, Stuckart says he has a head start on challenging the congresswoman in 2018.

Yet he's given up what almost seemed like a sure thing in the mayoral race — the city of Spokane leans slightly to the left — for a near impossibility. Stuckart would run as a Democrat, in the 5th District where the Democrats have lost every race in the past 22 years, usually by 20 percentage points or more.

And Stuckart — who has championed sick-leave policies, universal health care and changing the name of Columbus Day to "Indigenous People's Day" — doesn't pretend he isn't liberal.

"I think Ben is pretty radical and left-wing in his policy views," Baumgartner says.

Baumgartner, an economics affairs officer with the State Department in Baghdad during the Iraq surge, texts over a list of how the United States can better fight ISIS, ranging from reworking how the government handles contractors to bringing in more speakers fluent in Arabic, Pashto and Farsi.

"Knowledge of how to defeat this enemy is really missing in Congress," Baumgartner says. That scorn is bipartisan.

During the primary, Baumgartner tweeted that Trump was "a narcissistic clown show" and "laughably vapid on policy."

But since then, Baumgartner says, he's been impressed with the pick of Gen. James "Mad Dog" Mattis for Secretary of Defense. He was pleased with Trump's call with Taiwan's president — the one that sent China into a tizzy.

Baumgartner, as conservative as Stuckart is liberal, relishes political maneuvers that infuriate Democrats.

He gloats, often on Twitter, about Republicans seizing control of the Senate, of successfully firing Gov. Jay Inslee's Secretary of Transportation, and of sabotaging Inslee's climate plan with a "poison pill" in a transportation package.

Both Stuckart and Baumgartner point to the other's temperament as a weakness.

"Based on what we've seen from City Hall and the council, it looks pretty adversarial," Baumgartner says.

Stuckart doesn't apologize for his outspoken style. "I don't ever really hold my mind back on speaking issues," Stuckart says.

He criticizes Baumgartner for his eagerness to "throw bombs."

However, both have readily shown that they can flip a switch from bomb-thrower to diplomat. Stuckart's salvos against Condon ceased the moment the recall effort against the mayor failed, and he resumed eagerly pursuing economic development strategies for the city. Baumgartner was the only local Republican to support the gas tax hike to fund a transportation package, ensuring funding for the north-south freeway. Baumgartner, Stuckart and Brown all partnered together to pave the way for Washington State University to build a new medical school in Spokane.

As critical as Baumgartner and Stuckart can be of each other, that's nothing compared to the animosity between the two other men interested in McMorris Rodgers' job.

Plenty of local Republican politicians can talk about bad experiences they've had with state Rep. Matt Shea. Parker can talk about the time Shea came "unglued" after Parker voted against one of his amendments. Former County Commissioner Todd Mielke can tell you about being the target of an explosion of "spontaneous, extreme anger" from Shea.

But no two Spokane politicians, on either side of the aisle, talk about each other with as much venom as Shea and Sheriff Ozzie Knezovich.

Shea says the sheriff is "dangerous," lacks integrity, and refers to him as a "willfully ignorant Loyalist" — like the colonists who sided with the British in the Revolutionary War.

Knezovich has repeatedly called Shea a liar. He's suggested that Shea's incendiary rhetoric could get police officers killed. He talks about the road rage incident where Shea brandished a firearm, about Shea's involvement in the standoff at Cliven Bundy's ranch in Nevada, and about Shea's role in igniting the illegal occupation of the Malheur National Wildlife Refuge in eastern Oregon earlier this year.

It's a conflict driven by both personality and philosophy. Shea speaks out against armored police vehicles, and has supported bills to constrain the use of civil forfeiture and unmarked police cars. By contrast, Knezovich has given multiple public lectures arguing that police militarization is a "myth."

Knezovich is a counterpuncher. Hit him on his record or his integrity, and he hits back hard. He gets into fights with local conspiracy theorists on Facebook. He threatened Ron Wright, a former cop who sends out emails critical of the sheriff, with a defamation suit. He challenged wild-eyed Infowars conspiracy-monger Alex Jones to a one-on-one debate.

Shea, meanwhile, has attacked Knezovich in interviews with Infowars. (Shea did not respond to requests for comments from the Inlander.)

The Knezovich-Shea feud goes back years and — despite a 2012 diplomatic summit between the two at a food court table near Yakisoba Noodles in the Spokane Valley Mall — has only escalated.

Shea praised Anthony Bosworth, who'd made a threatening Facebook post about Knezovich. Knezovich is aghast that Shea sent Bosworth down to the Malheur refuge as a "security specialist."

In September, after Shea falsely alleged that a gun used in a 2015 triple murder had come from a sheriff's deputy, Knezovich asked the local Republican Party to censure Shea. The Spokane County GOP refused to get involved.

Shea paints the world as a dramatic clash between good and evil, burnishing his fiery, sermon-like speeches with quotes from the Bible and the film Braveheart. He's been predicting the catastrophic collapse of the U.S. economy for years — and argues that loving your neighbor means stocking up on food and ammunition for when the collapse finally comes. Knezovich sees this as fearmongering that could lead to violence.

Shea describes his campaign as part of a "no-compromise, principled constitutional conservative movement." It's a movement that doesn't include McMorris Rodgers. Shea refused to endorse her during this year's primary, considering an infrastructure and energy bill she supported to be "antithetical to Constitutional Conservatism."

This stark approach to ultraconservative purity has its costs.

"His uncompromising nature has led to no real accomplishments in terms of policies passed," Baumgartner says.

Two years ago, Baumgartner had complimented Shea for having "moved a lot of legislation." Today, however, he pooh-poohs the bills Shea has actually passed, like those allowing counties to let ATVs drive on public roads, as "pretty milquetoast" measures that require "the permission of Seattle Democrats" to get through the Democratic-controlled House.

Knezovich, meanwhile, denies that his motivation for running is his feud with Shea.

"I think running for office to get even with somebody is a foolhardy venture," Knezovich says. Instead, he says he looks at a country where police officers are shot and killed — and wants to unite a divided country.

"You're not going to get there by electing people who weaponize hate — weaponized fear," Knezovich says. He believes the federal government needs to fund community-led policing efforts. By improving policing, Knezovich hopes, the tension between cops and the communities they serve can be lessened.

He also says that the U.S. needs to improve its mental-health system and continue to pursue independence from foreign oil.

Knezovich points to his willingness to stand up to Shea, when few other local Republicans would, and says it shows he'd be willing to defy Trump if necessary.

"I won't surrender my core values," Knezovich says. "Any policy that further divides this nation, you can expect me to stand up and say, 'That's a no-go.'"

But there's a hypothetical scenario where Knezovich's campaign could backfire: Knezovich and Baumgartner — and possibly Parker — could split the votes of more moderate Republicans in a primary contest, pitting Stuckart or Brown against Shea in the general election. And then, by sheer virtue of partisanship in a strongly conservative district, Shea could conceivably become McMorris Rodgers' replacement.

Knezovich shudders at the idea.

"That would be a nightmare for this nation," Knezovich says. "Mr. Shea is unfit to be a congressman." ♦