Chicago-based Gigan lets their growling, hissing and technically dazzling music do the talking 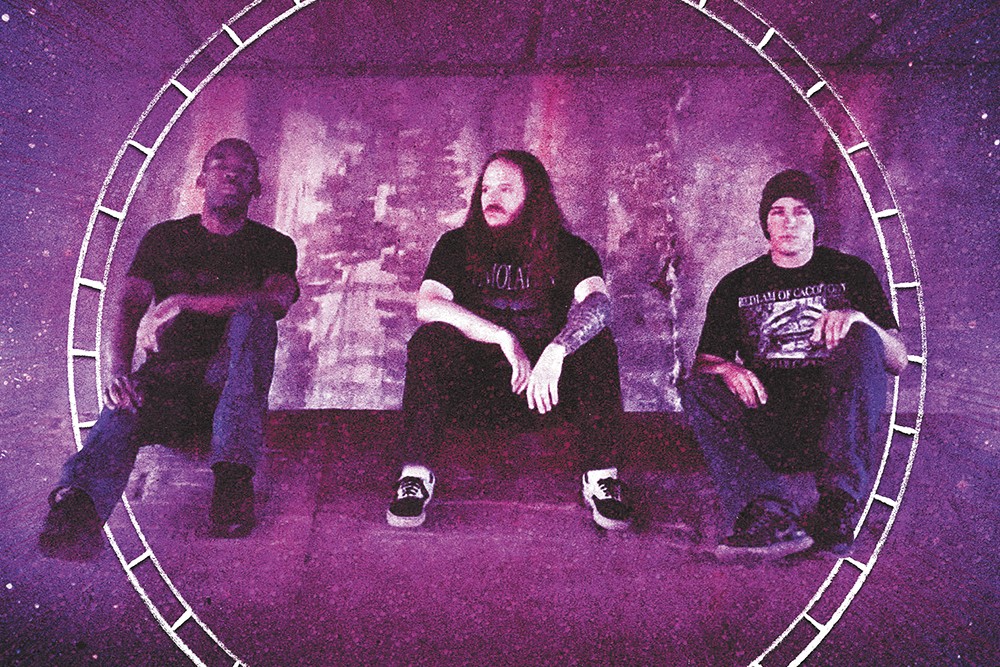 Gigan is just one of the many loud-ass bands coming through the Hop! this weekend.

Multi-Dimensional Fractal-Sorcery and Super Science sound like a terrifying sci-fi creature lurching to life. Shards of high-pitched noise dance around an ominous whir and a blast of noisy hissing clears a path for drumbeats and guitar rumble. At 100 seconds, a primitive growl enters the frame, almost buried by the chaos of mind-bending riffs and rhythms flying around.

The song is called "Beneath the Sea of Tranquility," and its brutal combination of heavy noise, technical skill and insuppressible melody embodies Gigan, a Chicago-based progressive death metal band. Its stirring intro, meanwhile, reflects core member Eric Hersemann's vision of Gigan being not so much a band, but an indistinct and inhuman metal-making thing.

"We don't actually acknowledge the crowd very much when we're playing, because it's just supposed to be one long piece of music experienced by a group of people and ... I want people to draw their own conclusions and have their own experiences based exactly on what they hear, and not any sort of impressions we may give them," Hersemann says. "This band is not about who's on the stage. It's about what's coming from the stage. It's about the music itself, and that's it."

He's wise to let the music do the talking. Since 2006, Gigan has built a reputation as one of extreme metal's most thrilling and technically dazzling bands, thanks largely to its critically acclaimed three albums: 2008's The Order of the False Eye, 2011's Quasi-Hallucinogenic Sonic Landscapes, and the stunning Multi-Dimensional, which sounds like a gang of acid-tripping music majors trying to write the ultimate tech-death metal opera while hurtling, without seat belts, through space on a rusty old rocket.

Gigan's whole aesthetic, from the music to the album art to the live concept, springs from Hersemann's bustling imagination — his love of the unknown, and the collision of the two.

"(Space) is just one more direction to take your mind," he says. "It's such a wide expanse of undiscovered area, it lends itself to ... lots of different concepts. But I feel that way about our oceans, too, and certain parts of the world that are not traversed by man. It's so unknown, and that's what makes it amazing."

Hersemann doesn't scale back his vision when talking about his band, either, often referring to it as the "Gigan universe." He knows that kind of language means the music must be transportative, and he's up for the challenge.

"When you're listening to this band, I want you to be a part of that world," Hersemann says.

"You're no longer in whatever sweaty club that we're playing that night. You have entered the Gigan universe, and we're gonna have our way with you and spit you out." ♦