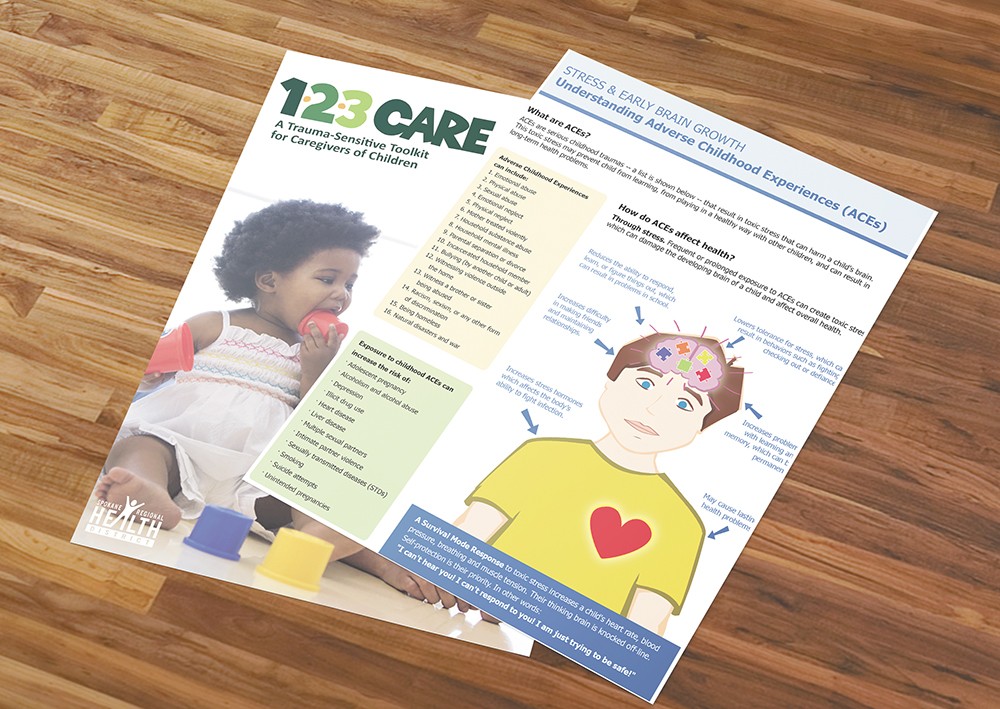 The new toolkit is designed to help caregivers respond to the needs of children who have experienced trauma.

As if it weren't enough to experience abuse, neglect, homelessness, hunger, or some combination of all of those things,

many children face a world of adults who don't really understand how to help.

Study after study documents the effects of adverse childhood experiences (ACEs) on a person's health and brain development. Most recently, research published in the Journal of the American College of Cardiology found that the more ACEs people had, the higher their risk of suffering heart disease, diabetes or stroke as an adult — even if the trauma ended decades ago.

For teachers, parents and daycare providers — or anyone else who cares for children with these kinds of experiences — the challenge of helping them just became a little more straightforward through a user-friendly "toolkit" developed by the Spokane Regional Health District that pulls together current research and offers resources and strategies.

It hasn't been long since the toolkit was completed, and its authors hope to see it put to good use in the city, where the scope of the problem is vast. A 2014 study found that, on average, adults in Spokane reported three to eight ACEs, says Sheila Masteller, Community and Family Services director at the Health District. Among children, "Title I schools in Spokane are very impacted," she adds. While poverty doesn't cause ACEs, it can contribute to a lack of resources and skills to respond well to adverse experiences.

in children through creating environments that are stable, as well as emotionally and physically safe, can help counteract the effects of ACEs. But it can be hard for even well-meaning caregivers who don't fully understand the effects of trauma to respond effectively to kids' needs.

That's because children (and adults, for that matter) under psychological stress often act out, have trouble focusing or experience problems connecting with other people. "When kids are living with complex trauma day in and day out, a lot of times they're just trying to maintain some level of keeping themselves safe," says Melissa Charbonneau, a public health nurse and the toolkit's co-author. Most of their energy is consumed by just trying to protect themselves, in ways that don't always seem logical to outsiders. "It might look like unhealthy behavior, but that's what they're doing to keep themselves safe," she adds.

Training caretakers to respond with sensitivity to trauma has worked in other places, says Antony Chiang, president of Empire Health Foundation in Spokane, which also prioritizes mitigating ACEs. After teachers at an alternative high school for troubled kids in Walla Walla received similar training, graduation rates improved and police-reported incidents and out-of-school suspension rates declined, Chiang says. In at least one instance, a student stopped skipping school because teachers learned ways to respond to his behavior with more compassion.

"I think that the bottom line is that when a child acts out because of ACEs, the natural reaction is to punish them," Chiang says. "I think that if parents understood the incredible negative impacts of ACEs, it potentially could modify their actions with a child," while still holding them accountable for their actions.

Rhonda Crooker, who has 20 years of experience

as a public health nurse, recently turned her attention to teaching foster parents about ACEs using the toolkit. "By definition, [foster children] have been through some sort of trauma," Crooker says. "Their brains work differently. They struggle with behavior issues because they don't have emotional thinking skills. Their responses are very emotional and raw ... Helping foster parents to understand how their brains are different — what causes it, how they're different — is really half of the battle, because once you understand that, it gives [you] more patience in dealing with the kids that are in [your] care."

The best techniques for dealing with children who have experienced trauma can sometimes be counterintuitive for caregivers. For example, children who have experienced a chaotic life may not develop "causal thinking," Crooker says. They often don't understand cause and effect. That means caregivers can't rely on common techniques like punishing bad behavior. "Consequences ... make no sense to kids who don't have causal thinking firmly in place," Crooker says.

Through the voluntary workshop called Fostering Healthy Connections, foster parents can attend support-group sessions where they discuss problems they've encountered and help each other apply the appropriate parenting tools.

Crooker hopes that trauma-sensitivity training will become mandatory for anyone seeking a foster care license through the Children's Administration in the state's Department of Social and Health Services.

"Parents have given really, really great feedback," she says. "I think part of what has been really rewarding for me is seeing how they keep coming back. It's been six months and I still have the same core group. That also tells me that it's been helpful for them." n