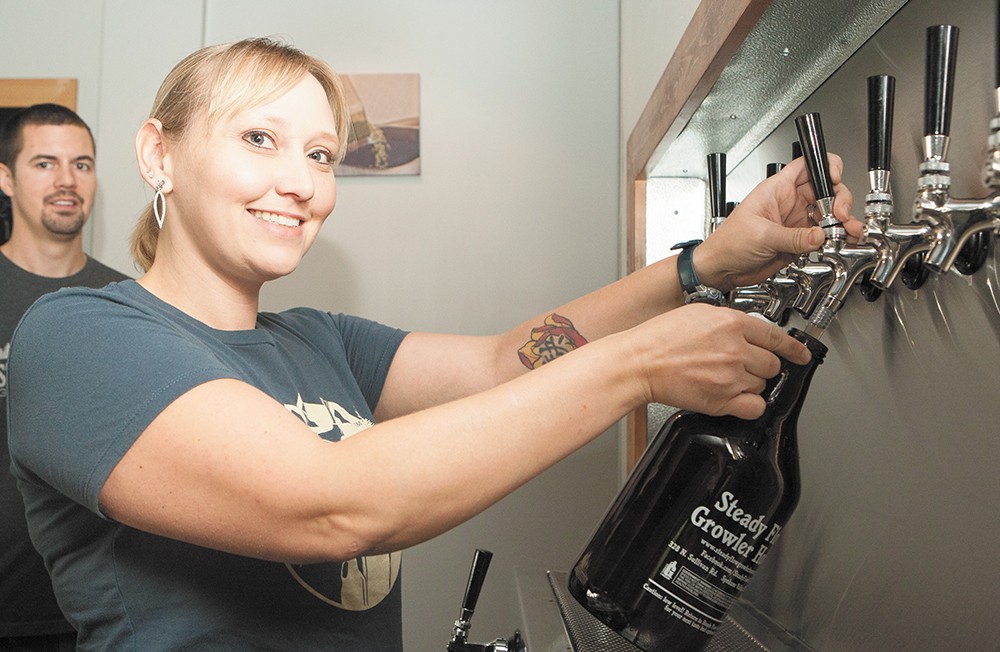 Meghan Kirk
Co-owner Cassaundra Preston pours from one of the 39 taps at Steady Flow Growler House.

While stationed in Okinawa, Japan,

Ashton and Cassaundra Preston lived near a bar that introduced them to world of craft beer. After moving to Colorado, the couple discovered that growlers could allow them to easily enjoy craft beer in their own home. They decided to bring this new passion back to Cassaundra's hometown — and conveniently, where the craft beer scene was beginning to take off — Spokane.

The Prestons opened Steady Flow Growler House over Labor Day weekend, giving away a free growler to the first 100 people each day of the weekend-long grand opening. "There are so many good breweries in this area and not enough places to sell their product," Ashton says.

He also emphasized the value of growlers. Opening Steady Flow Growler House — rather than a bar — provides people with an opportunity to taste a variety of beers in their own living rooms, then reuse the same growler to take something else home.

Their tap list includes 39 options emphasizing seasonal beers, limited releases, brewery collaborations, favorite local craft beers, ciders, wines and cold-brewed coffee. A constantly updated slate of what's on tap and how much of each keg is left can be found on their website.

Believing that people should be able to taste a pint or half-pint before committing to filling their growler, the Prestons thought including a taproom to sample their selection was crucial.

The walls of the taproom are covered in canvas prints of photographs they took of Inland Northwest breweries, indicating their priorities to offer local brews first, regional second and national third.

"We just really enjoy supporting the local economy," Preston says. "Our taps feature many breweries featured on the Inland Northwest Ale Trail, along with some from Oregon, California and Colorado."

Beyond supplying the best local brews, the Prestons also want to help educate Inland Northwest beer enthusiasts about the beverage, so that they can better appreciate what they're drinking.

"We're mostly just excited to become a part of what the Spokane Valley craft beer scene already is," says Preston. "And hopefully we can help to develop it even more."♦