There were at least a dozen local music releases over the past couple months,

proving that the local scene is as vibrant as ever. Below you'll notice some fan favorites, as well as a lot of up-and-coming acts putting out new LPs, EPs and singles.

This three-piece is always making music, steadily releasing new tunes since 2007. Their new album's driving instrumental noise is an absolute force, toggling between metal, progressive rock and math rock. The music makes you think, but never hard enough to interfere with any headbanging you'll want to do. Listen to the full 50-minute album, which just released last week, on Odyssey's Bandcamp page. (LJ)

Officially released at a rowdy show at nYne a couple of weeks ago, Silver Treason's first-ever album is a variety of some of their best twangy music. The four-piece, together since 2009, effortlessly blends punk, country and bluegrass into a yee-hawin' cohesive experience — one that even people who aren't fans of pop country can enjoy. Lyrics here, written by frontman Kevin Cameron, are whip-smart and fly by at rapid speed. Catch 'em if you can. (LJ)

I've always loved "disciples of the three-way," as Mike Watt called three-piece bands, so hopes were high when I spun Cutback Davis' latest EP, and I was well-rewarded. The five songs on 333 Halfway to Hell bounce from straightforward rockers full of chunky riffs ("LSD") to punk rave-ups ("I'm Going Blind") and even veering into prog-metal territory ("The Way"). Extra credit for the creepy spoken-word aspect on "Sole Molester." (DN)


OUIJA BORED, I Am A Number

This is a glorious blast of lo-fi goodness, full of slashing guitars, crashing cymbals and vocals that sounds like they were recorded at the bottom of a well. That's not a criticism. The title track of this single is particularly tasty, from the instrumental performance to the vocals moving from trancelike intonations to infectious shouts. Great stuff here — hopefully there's a full album's worth of songs coming down the line. (DN) 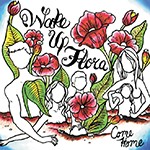 If acoustic-driven heartfelt balladry and driving folk-rock is your thing, you'll definitely want to give the new Wake Up Flora EP a listen. Singer/guitarist Kyle Siegel is a strong, emotive vocalist, and on these songs with drummer Cody Rhodes and bassist TR Rupinki, he creates an easy-listening vibe that could soon find a huge audience. A big plus is how great the recording sounds. (DN) ♦