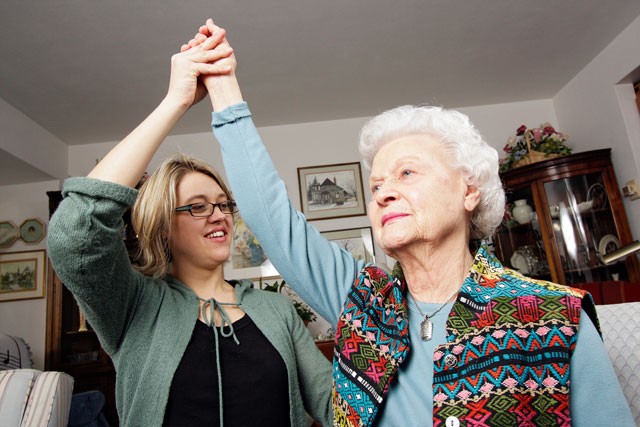 In the future, older people across the country will be treated like senior citizens here in the Inland Northwest. Gentiva Health Services, one of almost 10,000 Medicare-certified agencies nationwide, is one of just 11 home health providers selected to help design the future of health care for aging Americans. And the company will be using programs it developed in the Spokane area.

The Atlanta-based company was selected by the U.S. Centers for Medicare and Medicaid Services — an agency within the federal Department of Health and Human Services — to help realize the goals for the 2010 National Home Health Quality Improvement campaign. Those goals include reducing unnecessary hospitalizations and helping patients better manage their medications. Ultimately the project will provide multimedia Best Practice Intervention Packages that all registered agencies can access for free, educating those providers on tried-and-true approaches for treatment and coordination of care.

“What we do is really nothing earth-shattering,” says Kristin Rue, the director of neurologic specialties at Gentiva. “It’s a multi-disciplinary approach in a home setting.”

When the steering committee of which Gentiva is a part adjourns, a framework for cost effective and high quality home health care will be constructed, ready to transform an industry that is preparing for a tremendous influx of new patients. According the Census Bureau, the number of people over 65 will double by 2030, adding another 30 million people in this age category.

And home health care will play an important part in taking care of this booming population.

Aside from improved health care, one of the main objectives of the campaign is to save money. In 2004, Medicare spent $224 per person for home health care, compared to $3,439 for hospital care.

This hemorrhaging of money has created a financial crisis in the health care industry, says Kari Carbon, the Spokane-area director of sales for Gentiva.

“We’re involved in not only a national effort but a state effort to connect with our lawmakers to educate what role home health care plays in a solution to the whole health care crisis,” she says.

Neurorehabilitation is the process of aiding a patient in recovering from a disease or injury of the nervous system, including strokes and diseases such as Parkinson’s and amyotrophic lateral sclerosis (also known as ALS or Lou Gehrig’s Disease).

Rue, who led the program development, was drawn to Gentiva because of another one of its programs called Safe Strides, a program designed to reduce falls, which informs much of Rue’s neurorehab program.

“[Safe Strides] is a fabulous program, but on certain diagnoses, like Parkinson’s, we were kind of missing the boat because it’s a physical [therapy]-based program. … We weren’t really coordinating care [with other disciplines like occupational therapy and speech therapy],” Rue says. Safe Strides looks at the entire balance system — including muscle strength, coordination and even the vestibular system, an elaborate system located in the inner ear, that play an important role in balance.

If rehab doesn’t consider all factors, “You’re not going to make them worse, but you’re not dealing with the whole balancing system,” she says.

Similarly, the holistic approach led Rue to develop the neurorehab program, which may not change treatment strategy so much as it simplifies the complex and often fragmented process for patients and physicians. Instead of having the patient maintain separate discussions with his physician, nurse, physical therapist, speech therapist and so on, Gentiva lets the patient deal with just his physical therapist, who comes to the patient’s home and creates a comprehensive program based on the other health care professionals’ diagnoses, prognoses and recommendations.

“We’re looking at every part of this person’s being. The whole approach. We don’t really miss anything,” Rue says.

“It can get quite complex when a patient has multiple needs, and sometimes the physicians are receiving communication from multiple sources,” says Carbon. “Physicians really love the program. Families really love it because they don’t have to talk to a bunch of people. And we like it. We developed it locally and then launched it nationally. We built it from the ground up.”

And patients like it. Rue says it’s important to let patients set their own goals.

“We do patient-focused goals. … Why in the world would you want to do something a patient doesn’t want to do? There’s no buy-in,” Rue says. Not every story ends well, Rue says, but at least the people live their last moments on their own terms. “We’ve had some of our ALS patients die, but we enabled them to die in their own homes.”

But there are also happier endings. Rue’s favorite success story deals with a patient who had suffered a cerebellar stroke.

“[That type of stroke] really affects the part of your brain that does coordination. She had been a marathon runner, just a really active person, and she couldn’t even sit up in her bed. She was 60. Really young. Her first goal was to walk down the aisle at her grandson’s wedding,” Rue says.

Rue and her team began the full treatment.

“We worked with her for eight months,” Rue says. “And we got her to walk down the aisle.”