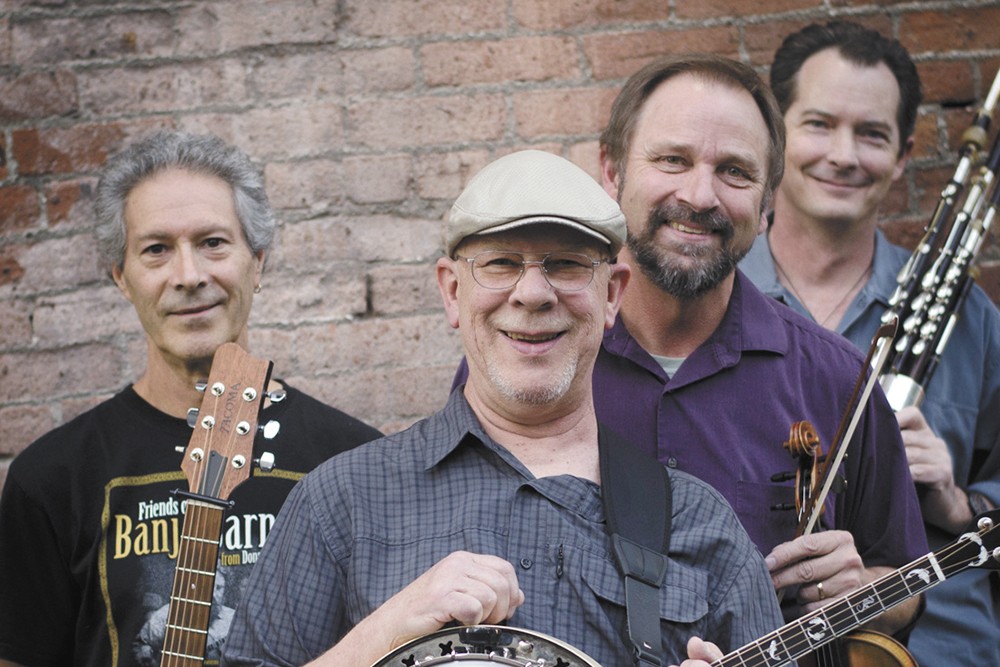 March is obviously going to be the busiest month for any purveyor of traditional Irish music, and with St. Patrick's Day right around the corner, Spokane's Floating Crowbar has multiple gigs crowding the week's calendar.

The quartet — Don Thomsen, Rick Rubin, Morgan Andersen and James Hunter — has been playing for audiences of all ages for a little over a decade now, though their sounds, inspired by the generations of folk music that have come from the western coasts of Ireland, aren't just attracting audiences in March.

Crowbar started building a fanbase as the weekly entertainment for the now-closed downtown restaurant Hills, and they're known for putting on a string of free shows in Spokane's local libraries every year around St. Paddy's Day. They've even taken their tunes to the actual Emerald Isle, first traveling to Ireland as a group in 2012, pooling together money they made at gigs.

They've gone back every two years, and hope to go for the fifth time this summer.

"Everybody participates in one way or another," Thomsen says of the Irish music scene. "Whether they're shouting encouragement —"

"Or buying you pints," Rubin adds with a laugh. "There's no wall between performers and observers. Everybody's there and they've all got something to say if they want to, and they're all participants if they want to be. ... We found them extremely accepting of our approach to the music."

The first time the band visited Ireland, they would simply go from pub to pub, asking if they could perform that evening. If you can find a gig, you're usually shoved in a corner, but people actually listen. You're not merely background noise.

"There's no sound systems. You play acoustically, not that it can't get loud," Thomsen says. "We were in one session that I think had five banjos, three accordions, a set of pipes and two bodhrán players, which is one too many. The thing about it, though, was that everyone was having fun, and everyone's welcome."

They talk about the characters they encountered, some of whom sound like they wandered straight out of a Pogues song. There was the guy named Seamus who could recite a string of lengthy rhyming stories that were as rude as they were funny. A bartender at one pub took a break from slinging pints to sit in and play for a room full of German tourists. And they ran into Irish musician Christy Barry, whose work they've actually covered, and were able to strike up an impromptu jam session with him.

Funnily enough, only one of the guys in the Floating Crowbar has even a sliver of Irish heritage. But both Thomsen and Rubin, who also host the weekly program Irish Music on Tap on KYRS, say the music is universal.

"You can go to Japan and hear phenomenal Japanese players of Irish music," Rubin says. "There's hardly a place on the planet where you can go that you won't find an Irish bar with Irish music happening. [Our bandmate] James found one in the Arab Emirates."

AND FOR MORE IRISH MUSIC...

O'Doherty's Pub, downtown Spokane's premier Irish hangout, has booked the local Celtic band Free Whiskey for performances on Saturday, March 14, and on St. Patrick's Day, both starting at 11 am and stretching into the evening.

And the new Irish-American pub Shawn O'Donnell's will have Irish dancers, bagpipers and drummers during dinner hours throughout the week, with sets by Floating Crowbar on Friday, March 13, at 5 pm, and again on St. Patrick's Day at noon.

Building a St. Paddy's Day playlist that's a bit off the beaten path