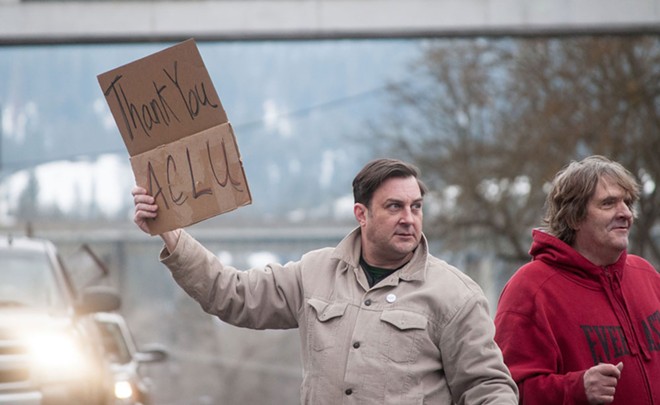 When it comes to urging constituents to COMPLAIN TO THEIR ELECTED OFFICIALS, both parties have stepped up their game. On Tuesdays and Wednesdays from 11 am to 1 pm, Democratic precinct committee officer Cynthia Hamilton stands outside the Peyton Building, where Rep. Cathy McMorris Rodgers' office is located.

"I'm aware of the fact that people are upset. And they want to talk to people," Hamilton says. "The best person for them to talk to, usually, is their elected members of Congress."

So she offers passersby guided tours of a sort, a chance to talk to the staffs of McMorris Rodgers, Sen. Maria Cantwell, Sen. Patty Murray, and the Spokesman-Review about their concerns.

She calls it "Project Snowflake" — a repurposing of the conservative insult aimed at perceived sensitive liberals.

"People need to hear stories of their constituents," Hamilton says. "It's kind of a way of bridging that gap."

Meanwhile, local Republicans are getting organized around taking on McMorris Rodgers' would-be challenger, Spokane City Council President Ben Stuckart. Spokane County Republican Chairwoman Stephanie Cates sent out robocalls last weekend encouraging conservatives to turn out for Stuckart's Tuesday town hall meeting. The GOP website also posed potential questions to ask Stuckart, like whether he planned "to continue using marijuana if elected to Congress" and whether he waited to pass a mandatory sick-leave policy until after the election because it was "viewed as politically unpopular."

"We just want to promote that he's bad for the 5th District, and encourage people to ask him some tough questions," Cates says. "If he's going to criticize the congresswoman for not standing up to tough questions, we'll see if he can."

Stuckart says he welcomes the chance. "If half the crowd hates my guts and comes in there, I do see it as an opportunity," Stuckart says. (DANIEL WALTERS)

A new group is looking into the feasibility of renovating the former OTIS HOTEL into about 100 small-to-tiny apartments, with commercial space on the first floor.

The former hotel at 110 S. Madison St., a skid row apartment building in later years, has been empty since 2007, when the final residents were required to leave for what was supposed to be a renovation into modern apartments. That didn't happen, and after the recession hit, the site changed hands several times.

Plans submitted to the city in March by ZBA Architecture show the potential for dozens of units on the second through fifth floors of the building at First and Madison, units that would range between about 250 and 500 square feet.

While the assessor's site still lists the building as owned by Coastal Community Bank of Everett, the plans submitted to the city say it's owned by Curtis Rystadt of Portland. Rystadt is registered as owning several corporations dealing with property and real estate in Oregon.

The site plan estimates the project's cost at about $4.5 million, and says it could start as soon as July. Mark Richard, president of the Downtown Spokane Partnership, says he heard that due diligence was being conducted for a possible purchase: "I think what we're seeing in general is a huge interest in downtown living, and I think the micro units have a strong potential to fill a really neat niche." (SAMANTHA WOHLFEIL)