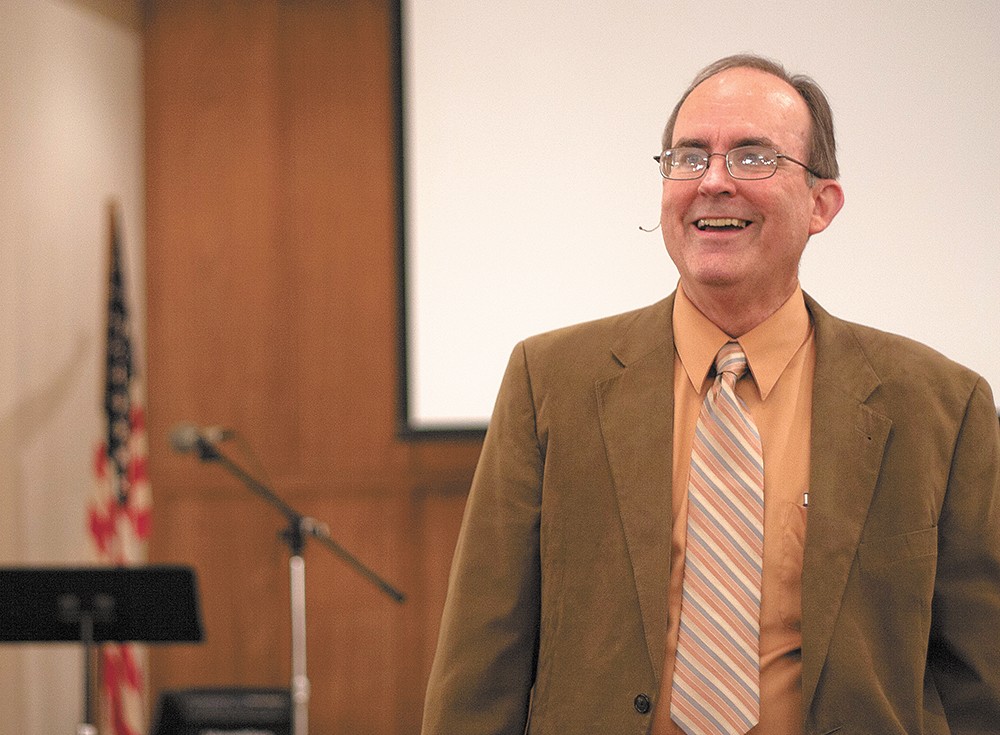 Ashley Tomlinson
For the past six years, David Stapp, pastor of First Baptist Church, has endorsed candidates from the pulpit.

A few weeks before Election Day

in the tiny north Spokane County town of Deer Park, David Stapp stands before his congregation at First Baptist Church and, in his soft Texas drawl, intentionally breaks the law.

"In the first 300 years of this country, it was customary all across the land for the pulpits of America to preach what was called an 'election sermon,'" he begins. "I'm going to preach about some things I've never really preached about before."

As sermons go, it isn't fiery or angry. But the embrace of politics is unabashed: Stapp dives into Bible verses he interprets as opposing gun control. He flashes up red PowerPoint slides with quotes about abortion and gun control from the Democratic and Republican Party platforms, and includes a parishioner's assessments of the two gun initiatives: "Jay says vote no!" on the background check initiative slide; "Jay says vote yes!" on the pro-gun-initiative one.

Across faiths and denominations, churches debate their role in politics. But those who choose to mix the two have another dilemma: Do they follow the rules?

Legally, pastors can give sermons discussing politically charged issues. But when it comes to endorsing or opposing specific candidates, churches risk losing their 501(c)(3) nonprofit tax-exempt status. It's been that way ever since Sen. Lyndon B. Johnson amended the U.S. tax code in 1954. But Stapp and some other local pastors have defied or dodged these restrictions.

"The country was built on the concept of taking the word of God and applying it to public policy," Stapp says. "Let's talk about a couple candidates."

The Freedom From Religion Foundation calls such actions not only illegal, but unethical.

"Rogue pastors who endorse from tax-exempt pulpits are playing dirty pool," foundation founder Annie Laurie Gaylor says in a release. "Such an abuse creates an unfair election advantage. Donations to politicians are not tax-deductible, but donations to churches are."

Nevertheless, for the past six years, Stapp has preached at least one sermon like this. Last year, he preached on property rights. His church has endorsed Rick Perry and Rick Santorum in primaries. He endorsed Rep. Matt Shea three elections in a row.

The first time he delivered such a sermon, in 2008, he endorsed John McCain. At first it felt uncomfortable. "I felt like I was trying to swim in peanut butter and honey," Stapp says.

But he didn't try to hide it. In fact, he sent a cassette tape recording of the sermon to the IRS, "saying we broke the law, there's the tape," he says.

It's part of an annual nationwide effort called "Pulpit Freedom Sunday." The socially conservative organization Alliance Defending Freedom wants to sue to get the restriction on churches changed. But first it needs a church to be punished for endorsements. Despite 1,600 churches participating in endorsing candidates this year, and a 2012 Freedom From Religion Foundation lawsuit over IRS inaction, the IRS hasn't appeared to have prosecuted churches.

Gaylor says the IRS has insisted they are enforcing the law, but she says there's a simple solution for politically inclined churches.

"If a church wants to endorse to the public, it shouldn't have that 501(c)(3)," she says. And that's exactly what some local churches are doing.

At the God and Country Celebration in June, "patriot pastor" Shahram Hadian preaches about the Book of Esther with salvos of ideological intensity. "We have now seen an infiltration of our nation, our government, our schools, by socialists, communists, secular humanists," Hadian says. "And now Islamists."

This Sunday, at the La Belle Vie Event Center, Hadian plans to officially launch a Spokane branch of the Truth In Love Christian Fellowship.

It will be a different kind of church, all the way down to its tax code status. Hadian calls it a "free church," meaning it isn't organized as a nonprofit.

He says it's not really about the freedom to endorse candidates as much as a philosophical objection to the tax code restrictions. "Does the government have the jurisdiction to license the church?" Hadian asks. "I would argue no."

A former Muslim from Iran, Hadian preaches unabashedly about gay marriage, border security, tax policy, Sharia law and, frequently, when to defy the government. One message, over three weeks, focused on a spiritual "civil war between Christians."

He believes the reluctance of the IRS to prosecute churches won't last. Hadian points to the scandal regarding whether the IRS targeted conservative groups, the city of Houston's temporary threat to subpoena sermon notes for a lawsuit, and the furor in Coeur d'Alene over whether the Hitching Post would be able to refuse to perform same-sex weddings.

"The bottom line is I believe they're coming after the church," Hadian says. "It's just a matter of when."

He sees his Spokane Valley location as a hub for a network of similar traditional and house churches. And he's not the only one trying to spread the free-church model. In May, Chuck Baldwin of the Liberty Fellowship Church in Flathead County, Montana, launched an initiative to help establish a crowd of new "free churches." ("I remind you that donations to Liberty Church Project are NOT tax-deductible," Baldwin writes on his website.)

Other pastors, however, are made uncomfortable by preachers' political pronouncements.

"I think churches could help by breaking down the walls and deconstructing the polarizing language," says Andy CastroLang, pastor of Westminster Congregational UCC. "We don't have to all be on the same page. But we sure as hell should stop demonizing."

Yet her church is clearly politically active. The sign outside her church urges parishioners to support the background check initiative. She uses some of the same language to support gun background checks as Stapp does opposing abortion. "For us, it's a matter of protecting human life," she says.

Her church fought as hard to retain gay marriage as other churches did to repeal it. But there are lines she tries not to cross. CastroLang says she's had to gently correct parishioners who say things like "all those people who think President Obama should not be elected, I hope God will change their minds" in their prayers.

Jim CastroLang, her husband, faces an even tougher balance: He's simultaneously the pastor of a Colville church and the chair of the Spokane County Democrats. As a pastor, he can't directly advocate for candidates. As the Democratic chair, that's essentially his entire job.

"You have to understand who you are and what role you're in," he says. He sees it as a professional boundary, similar to those therapists and attorneys have.

"It's a little cozy in my opinion," Gaylor says. "But if he's being scrupulous from the pulpit, then I think he's technically following the law."

Though Stapp fervently disagrees with the CastroLangs' positions, he says they shouldn't have to worry about expressing them.

"Unless I fight for their freedom, I lose mine," Stapp says. "I don't think the government should tell either one of us what we oughta be preaching." ♦