Classic public school model not cutting it? Look into a few of these charter-school options 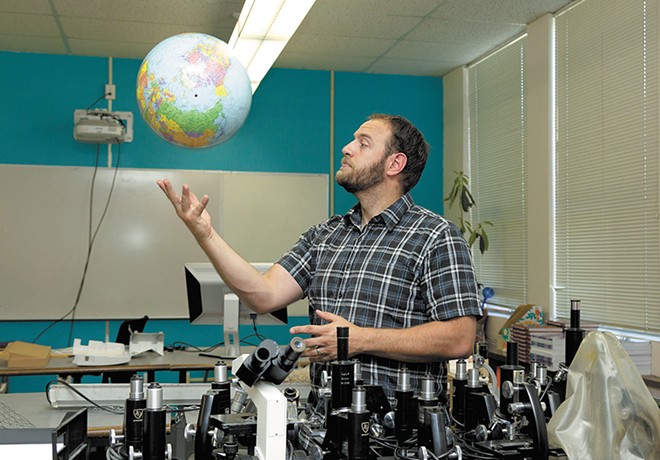 Idaho has had charter schools, with all their strengths and flaws, for two dozen years. Washington state has only had charter schools for two. Yet some of Washington's first charters have begun to pop up in Spokane. These aren't the cookie-cutter schools put out by massive charter organizations, either. These are schools run by local educational leaders, that have unique missions aimed at specific students.

Charter schools are still public schools — they don't charge tuition and they're paid for with state money — but they're given far more flexibility and autonomy than most traditional schools. In each case, any student can apply, but it's up to a random lottery system to determine if applicants can get in. The question is which school to apply for.

The newest charter school in the Inland Northwest, the Spokane International Academy, opens this fall with a class of 50 kindergartners, 50 first-graders, and 60 sixth-graders. Eventually it will grow to a K-8 school.

Yes, it's a school with a particular focus on foreign language education. Every student, even the kindergartners, take Spanish, with other languages possibly coming in the future. The International Academy goes further than that, utilizing the same famous Cambridge International curriculum used by schools around the world, and capping the experience with a trip abroad.

Typically, this is the type of school that might attract students with high-income, high-pressure, goal-oriented parents. But that wasn't the vision founder Travis Franklin had for the school: Instead, he located it in economically depressed Hillyard, with a plan to aim at low-income kids and refugees.

"Because it's an international curriculum ... the curriculum is really accessible for English language learners," Franklin says.

Since state law requires enrollment to be conducted by random lottery, Franklin had to concentrate on recruiting in key locations, partnering with World Relief to find incoming refugee families. It worked. Of the 160 students enrolling, fewer than three-quarters of them were white, and many of the others included refugees from the Burmese and Congolese communities.

Ideal for: Students who want to complete big projects and learn using technology.

PRIDE Prep was the first public charter approved in the state, but this is the first year it's opening, with sixth and seventh graders kicking off the charter school. They'll add another class each year, until they reach the 12th.

Created by former Garry Middle School Principal Brenda McDonald, PRIDE Prep achieves what the state of Idaho unsuccessfully attempted a few years ago: A laptop or tablet for every student. They'll spend part of the school day working on a "personalized learning platform" that specifically addresses their individual strengths and weaknesses. They'll get personal tutoring and small group instruction to help them at the academic level they're at. The rest of the day is devoted to project-based learning. What does that look like? McDonald gives an example.

"Kids might identify that there's a particular problem with water in the Spokane Rver, let's say," she says. "So through water sampling and scientific discovery, they'll come up with a solution they think might solve that problem. There might be a scientific solution that might be driven by educating people."

Ideal for: Hard-working students who want to knock college out of the park.

Look at the data of the most successful schools in Idaho, and Coeur d'Alene Charter rises to the top tier every single time. About 70 percent of the students go on to four-year colleges, and there's a reason for that.

"We are a rigorous school of choice. Everybody who comes here signs on to a tough program with the expectation they're going to college," Principal Dan Nicklay says. "We have a huge advantage with that... Every single kid here has a parent who cares at least enough to make an active choice in their education. I think that's one of the biggest arguments for school of choice."

In 2015 the Washington Post ranked Coeur d'Alene Charter the most challenging school in Idaho. It's classical education in the classical sense — complete with uniforms, Latin language requirements, and half-hour silent study sessions. Where many charters have made technology their centerpiece, Coeur d'Alene Charter has stuck with pen and paper.

Not all students make it through all six years of Coeur d'Alene Charter. But those who do are ready for anything.

With the slogan "In a Competitive World... Give Your Child the Edge," the North Idaho STEM Charter Academy focuses unabashedly on STEM: science, technology, engineering and math.

"We're a true STEM project," Principal Scott Thomson says on the school's website. "We're not a bolt-on or a buzzword-type program. We do STEM every single day." Core subjects are taught in the mornings, and in the afternoon — every single day — students tackle big projects. They learn programming. They build "Mars Rover"-style robots out of LEGO bricks. They try to make a shoebox fly.

Forrest M. Bird, unlike most of us, has probably saved thousands of lives. The aviator, medical doctor and engineer invented the "Fluid Control Device; Respirator; Pediatric Ventilator Respirator/Ventilator," or the Babybird respirator for short. At the Sandpoint-based charter schools named after him, the faculty hopes to inspire the same sort of diverse accomplishment in their students.

At the school's rebranding of Sandpoint Charter School in 2013, they added an Inventor's Garden, full of gadgets, gizmos and other artifacts.

"My hope for that teenager, as they walk through the door in 5 or 10 or 20 years, and as they pass the Inventors Garden, [is] that they might think, 'Hey that could be me,'" administrator Alan Millar wrote in the Bonner County Daily Bee in 2013. "It is kind of corny, but maybe they could be inspired to persist a little longer on a math problem, sweat out one more edit on a paper or turn in that last assignment in chemistry."

Along with a project-based take on a wide variety of subjects — unlike most charters, there's no specialty — the school runs on a trimester system. That means students can earn required credits faster, passing dual-credit classes long before they get to college.

Ideal for: Students who've fallen behind but don't want to stay there.

Kootenai Bridge Academy is a virtual charter school focused on "credit retrieval." For those about to drop out of their traditional high school, Kootenai Bridge provides a perfect solution. Here, it's about results, not seat time. Students can come to class, where there's a computer lab, four teachers and two teacher assistants to assist them. But they can also get much of the same work done at home. Either way, diligent students can complete an entire course in a month, or even faster if they come on in on Fridays.