How to (try to) do a Western in the post-Deadwood universe. 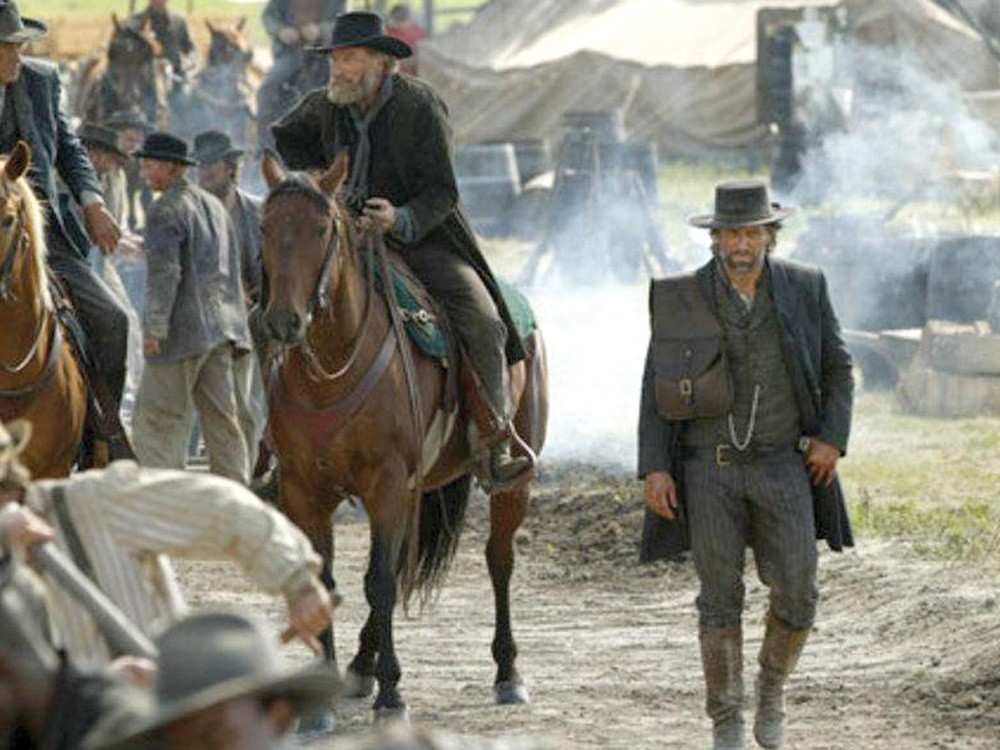 The secret to AMC’s well-deserved reputation is that it creates series around anti-heroes you want to root for. So far, though, Hell on Wheels frontman Cullen Bohannan (Anson Mount) ain’t no Walter White. Or Don Draper.

Named after an actual mobile work camp in Nebraska, Hell on Wheels follows the politics, greed and post-traumatic stress that fueled the quest to build Union Pacific’s first transcontinental railroad.

Series creators Joe and Tony Gayton are aspiring to replicate the gritty, lawless society that was post-Civil War America. This might have been a gutsy proposition if we hadn’t already lived through Deadwood. David Milch’s foul-mouthed, filthy and fascinating HBO series has likely ruined anyone else’s chance at creating an “edgy” Western. The Gaytons are fighting an uphill battle.

Mount’s Bohannan, a former Confederate soldier, has no commitment to uniting the east and west; he just wants to kill the men responsible for his wife’s death. “Tell Me About Meridian” is the only thing he says before he wastes dudes. It’s like Samuel L. Jackson’s “Ezekiel 25:17” speech in Pulp Fiction, only not awesome.

Bohannan is being billed as “neither a hero nor a villain” because he’s diplomatic to the newly freed slaves, in spite of the fact that he fought to keep them enslaved.

Hip-hop singer and actor Common is one of the newly “emancipated” men working the chain gang. He’s impatient for his life to start looking different than it did during slavery. He slashes someone’s throat for Bohannan and then they’re indebted to each other.

So far, there’s no humanity universal enough to relate to, no actions evil enough to need redeeming nor thoughtful enough to try and understand. (AMC, Sundays, 10pm)

In its second season, Jason Priestley’s Richard “Fitz” Fitzpatrick, the disheveled, alcoholic owner of a used car dealership, may be marked for death. He and his hilarious “conscience,” Larry, (Ernie Grunwald), get into hi-jinx similar to those in HBO’s Bored to Death. Every scene with Fitz’s flawed family is darkly gorgeous. (Direct TV Audience Network, Thursdays, 9:30 pm)

No, Jack Black doesn’t do the voice of Po, but voice actor Mick Winglet (he of the Kung Fu Panda videogame) is a good vocal pinch-hitter. If you love the movie, you’ll enjoy the animated series, which is more than you can say for most inane cartoon series. (Nickelodeon, Mondays, 5:30 pm)

The Biggest Loser: Where Are They Now?

The two-hour special offers the “now” lives some of your favorite contestants. Chefs will be showing you how to cook a healthy Thanksgiving meal so you don’t end up like the “before” pictures, and if that doesn’t sell it for you, there will be a blooper reel! (NBC, Wed. Nov. 23, 9 pm)