Hospice helps when the need is greatest 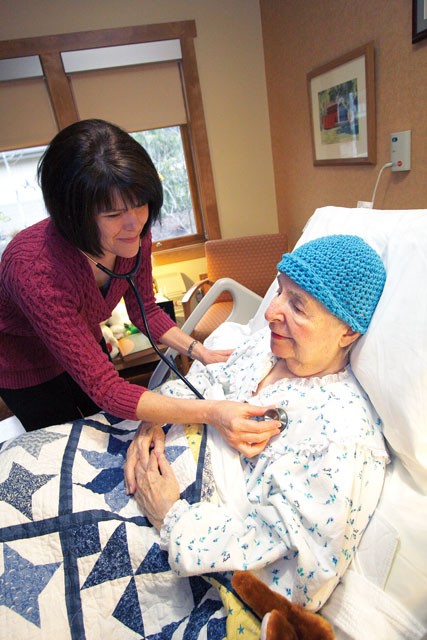 Young Kwak
Nurse Manager LouAnn Ward checks 83-year-old Kathryn McCullochs chest at Hospice of Spokane. McCulloch has been a client at the hospice for three months.

Death can come unannounced, without a word of warning or foreshadowing. But other times, death comes more slowly. Those last months, last days, last moments, can be filled with dread, anger and fear, or peace and closure.

That’s where Hospice of Spokane comes in. Started in 1976, one of the first 12 hospices in the country, Hospice of Spokane cares for the physical, spiritual, emotional and philosophical needs of the dying in their last days. Sometimes, it’s about finding the last things on the “bucket list” to cross off. Other times it’s about repairing rifts between family members — or helping them emotionally accept rifts that cannot be repaired. A team of chaplains helps terminally ill patients of all religions — and even agnostics — prepare for the journey ahead. It’s about asking the dying patient what, exactly, they need to finish their final chapter.

“We don’t get to write the script for a person’s ending,” hospice CEO Gina Drummond says. “You know, we don’t walk in with an agenda, a checklist. We walk in to talk about what are the things that are troubling you.”

Sally Neumann and her husband Budd have seen both sides of hospice care. After Budd retired, he and Sally searched for something to do together. They found a hospice in Sandpoint where they could volunteer. They became respite caregivers. When someone wanted a break for a few hours from caring for their terminally ill family member, Budd and Sally would swing into action, giving that person crucial time to shop, get banking done, or just relax.

But 10 years later, Budd’s health begin to fail. He never fully recovered after an open heart surgery. After doctors investigated further, they found he had developed lung cancer.

Now, once a week, one hospice volunteer comes to give Sally a day off.

Another helps Sally wade through the legal muck, helping her sort through funeral arrangements and the will.

“The social worker has really helped with going down the list and making sure the paperwork is in order, making things easier,” Sally says. “Things that would take me a lot of time.”

“There’s medication, but there’s also relaxation techniques,” Drummond says. “Addressing the anxiety that comes with pain and addressing spiritual issues can have an impact.”

The hospice workers also help bathe him and clean his bed. This all happens at Neumann’s house, and not at some distant hospital.

That’s not to say that any of it has been easy.

“After 55 years together it was very difficult to know that we had to have a hospital bed brought in [to the house],” Sally says.

But having the time to forge strong relationships with those in hospice care, she says, has been vital. Budd has already met with a funeral home to plan his departure.

“It’s really a burden off of me. I did not want to be faced with choices on the last moment,” Sally says. “It’s just really nice to know those ends have been taken care of.”

To become part of hospice care, a doctor has to conclude the patient has six months or less to live. Hospice CEO Gina Drummond says that Medicare, Medicaid and most insurance companies will pay for hospice care. But even if they don’t, Hospice of Spokane will take care of patients anyway. “We’ve never denied services to anyone because they didn’t have money,” Drummond says.

The ways volunteers can help vary dramatically. Some visit and play musical instruments. Volunteer Alan Meyers visits with Sadie. Sadie is his Labradoodle, trained and certified to help cheer up patients.

Meyers says, “I find… she’s a ready in-road with most patients,” who Meyers says can be feeling depressed and discouraged.

“When a dog comes in, they can just take the love from the dog.”

The hospice, Meyers explains, excels in getting patients what they want and what they need. Sometimes that’s as simple as being there. Volunteers take shifts by the bedside of a patient in their last hours, to ensure, before they close their eyes for the last time, they see someone who cares.