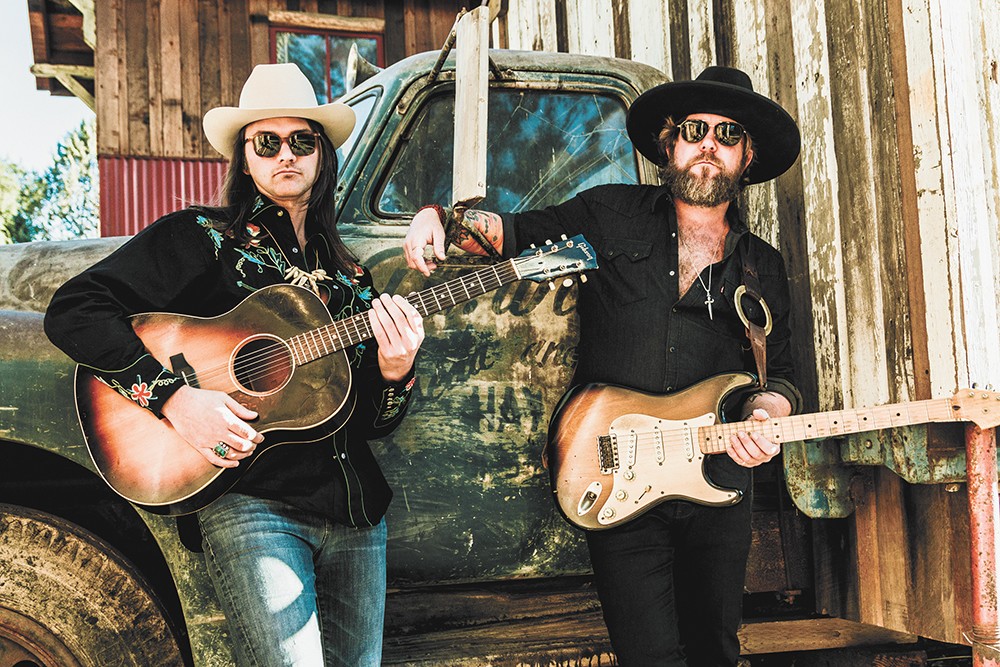 Part of being a music lover is also being a snob, and even though my mind has opened considerably as I've aged, I still remember all the genres I just couldn't give any time to when I was growing up.

Southern rock was definitely verboten for much of my life. Lynyrd Skynyrd was a prime example of why I hated "classic rock" when I was only listening to punk, and their using Confederate flags until well after that racist symbol's expiration date didn't help. But I eventually loosened up thanks to some other groups of the genre, including the Allman Brothers Band.

Next week, a couple of the Brothers' offspring — Gregg Allman's son Devon and Dickey Betts' son Duane — are bringing their new music project the Allman Betts Band to Spokane to celebrate their original songs and those of their famous fathers. If bluesy riff-rock with serious groove is your thing, they're worth checking out.

Southern rock wasn't always my thing, but here are a few of the artists who helped show me the way toward acceptance — not of the Stars 'n' Bars, but of bands with three guitars.

As a punk fan, I went to see a show by long-forgotten hard-rockers Junkyard solely because they had a guy from Minor Threat and Dag Nasty on guitar. Opening up were a bunch of nobodies from Atlanta whose first album hadn't even come out yet, but they brought a serious swagger that was like Rolling Stones or the Faces if they'd been born in the American South. The Black Crowes were playing to 12 people, and it was like they were in an arena. A few months later their 1990 debut Shake Your Moneymaker came out and eventually sold 5 million copies. I've been a fan since (which isn't always easy, believe me), and they planted seeds for a future acceptance of Southern rock.

Yes, I can pinpoint the dates I first saw Drive-By Truckers live — Jan. 18-19, 2002 — because that's the kind of nerd fan I am now, 18 years later. Touring in support of their breakthrough double-album Southern Rock Opera, and playing a club that held about 300 folks, the Truckers delivered half the opera one night, the other half the next. In introducing songs about George Wallace, Bear Bryant and Lynyrd Skynyrd with their own three-guitar attack and righteous live show — and making it abundantly clear their attitudes and politics had nothing to do with the stereotypes I had of the South — DBT kicked open my mind and softened my stance against the bands they grew up on in Alabama.

Tom Petty and the Heartbreakers

When Tom Petty and the Heartbreakers' 1985 album Southern Accents was being recorded and released, it went from being the Album Where Tom Broke His Hand Punching A Wall to the Album With the Alice In Wonderland Video ("Don't Come Around Here No More") to the Album that Unfortunately Spawned A Tour Full of Confederate Flag Imagery (Petty later publicly regretted that choice). Years later when I reassessed Petty thanks to his Wildflowers and Full Moon Fever albums, this was the record where he'd shifted from generic rocker into an astute chronicler of his Southern roots. The title track and "Rebels" are killers.

I would hazard a guess that nine out of 10 people reading this have heard some cover band play "The Weight" by the Band. You know the tune even if you don't think you do ("Take a load off, Fanny/Take a load for free..."). I never loved that song, and never really knew the rest of the Band's prodigious talents until long after they ceased to be. It was 1972 live album Rock of Ages that I probably bought in the mid-2000s that really got me into this incredible quintet that tapped into American roots music like few others — despite being 80 percent Canadian!

By the time the Allman Brothers Band singer played the Fox in Spokane five years ago, the previous entries on this list had softened me up to the point where I proactively listened to the Allmans' live At Fillmore East album a few times each year. Seeing Allman sing "It's Not My Cross to Bear," "Midnight Rider" and "Melissa" was sweet — and I was especially glad I got to see him before Allman died in 2017. Seeing Gregg's son alongside Allman Brothers' bandmate Dickey Betts' offspring years later should be something. ♦

Speaking of Southern Rock , The Fox