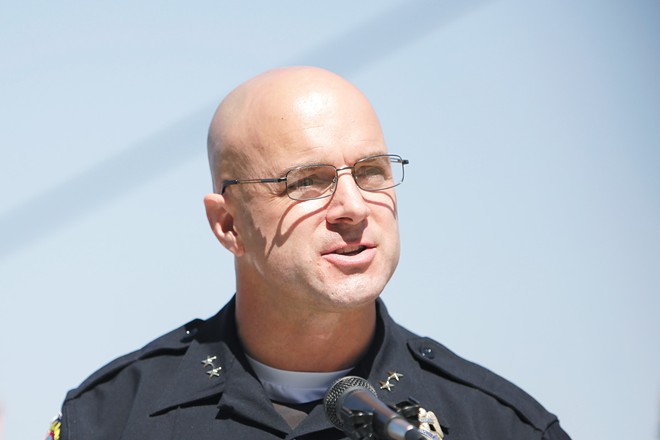 Young Kwak photo
SPD Chief Craig Meidl says activists are intentionally misreading stats to hurt the department. Others say he's the one not understanding the data about police violence.

For nearly a year, local police-reform activists have been citing stats from Mapping Police Violence — a database of police killings started by prominent Black Lives Matter protesters — showing how the Spokane Police Department compared with other cities.

"We used to be fifth-deadliest, but that number has been adjusted," activist Anwar Peace told KREM last month. "Now we're the third-deadliest police force in the nation."

Police Chief Craig Meidl responded with a Facebook video on Friday, arguing those statistics were part of an "inflammatory," "damaging and dangerous narrative."

"We do not need the community being concerned about the police department," Meidl said. "We want them and need them to trust us."

The Mapping Police Violence website does come with caveats: First, the database misses an estimated 8 percent of police killings. Second, the stats look at the per-capita rate of people killed by each police department from 2013 through 2020, not raw totals.

Third, it's only looking at the 100 largest cities. So Spokane, the 99th largest city in the country, is being compared to Boise, Seattle, Chicago and St. Louis in their rankings, but not to Tacoma or Coeur d'Alene.

So while the data suggest that Spokane police kill people at more than twice the rate that Chicago police do in that violent big city, Meidl prefers a less alarming sounding stat: On average 2.1 people are killed by police per year in Spokane.

Meidl suggests to the Inlander that activists were intentionally or unintentionally misreading the stats, using "shock value to drive a discussion" about police killings that "we were already willing to have."

An Inlander records request, however, shows that back in September, Police Strategies CEO Bob Scales — the consultant hired by SPD to analyze use-of-force data — encouraged the department to "acknowledge that the statistic from mappingpoliceviolence.org is correct."

Still, Scales stressed that the "racial disparity calculations are meaningless when you have such a small sample," and he objected to only looking at the 100 largest cities, arguing that "better analysis would be to examine death rates in Spokane compared to similarly sized cities."

Instead, in his Facebook video, Meidl used Police Strategies data to argue that Spokane had the 39th-lowest per-capita rate of police killings when compared to every other city in Washington. Deer Park — a city of a little over 4,000 with only a single person killed by a sheriff's deputy killing over nearly eight years — ranked seventh.

"My hope is that people would understand that there's a lot of data and a lot of variables, and that you can manipulate data to tell the story that you want to tell," Meidl tells the Inlander.

But that goes for police chiefs as well as activists. Spokane City Council President Breean Beggs says he discouraged Meidl from making the claims he did in the Facebook video.

"I told him that his statistics and analysis were incorrect," Beggs says. ♦