In the Name of Justice 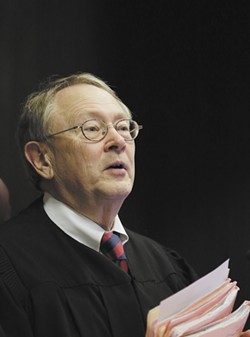 Young Kwak
Judge Gregory Tripp has been on the bench for nearly 20 years. He has not decided whether he'll run for re-election in 2018.

and you might not get a fair shake. At least that's the message sent by some Spokane County public defenders.

From June to mid-July, public defenders filed 49 motions — known as "affidavits of prejudice" — arguing that clients assigned to Tripp's courtroom could not get a fair hearing. And this wasn't the first time they've acted.

Public defenders made a similar move from February to May of 2015, filing 175 motions for a change of judge. For a time, things got better. But the most recent flare-up began again after a "tough" and, defense lawyers say, at times "unreasonable" prosecutor assigned to Tripp's courtroom made for the perfect storm.

"Sometimes you run into a situation where you know, no matter what the charge, that your client is at a disadvantage, and you'd do better in another court," says Tom Krzyminski, director of the Spokane County Public Defender's Office. "We're concerned with clients' rights, and that's how we have to operate."

For his part, Tripp says he weighs each judicial decision based on the person in front of him — demeanor, arguments from attorneys, case history and personal life experience. He does not want to speculate as to why the public defenders removed cases from him, but says they have the right to do so.

Court rules do not require attorneys to give a reason when asking for a new judge, but public defenders point to examples that amount to a more heavy-handed approach — a tendency to impose more onerous sentences than other judges.

Affidavits of prejudice are commonly used by both prosecutors and defenders seeking different judges, who hear cases based on a defendant's last name. But it's unusual for one side to file such motions en masse against a single judge.

"People in other courtrooms aren't getting the same [sentences] as they are in Judge Tripp's courtroom, in my experience," says Kendra Allen-Grant, a public defender. "And it's because of their last name. A through D, and you're with Tripp." 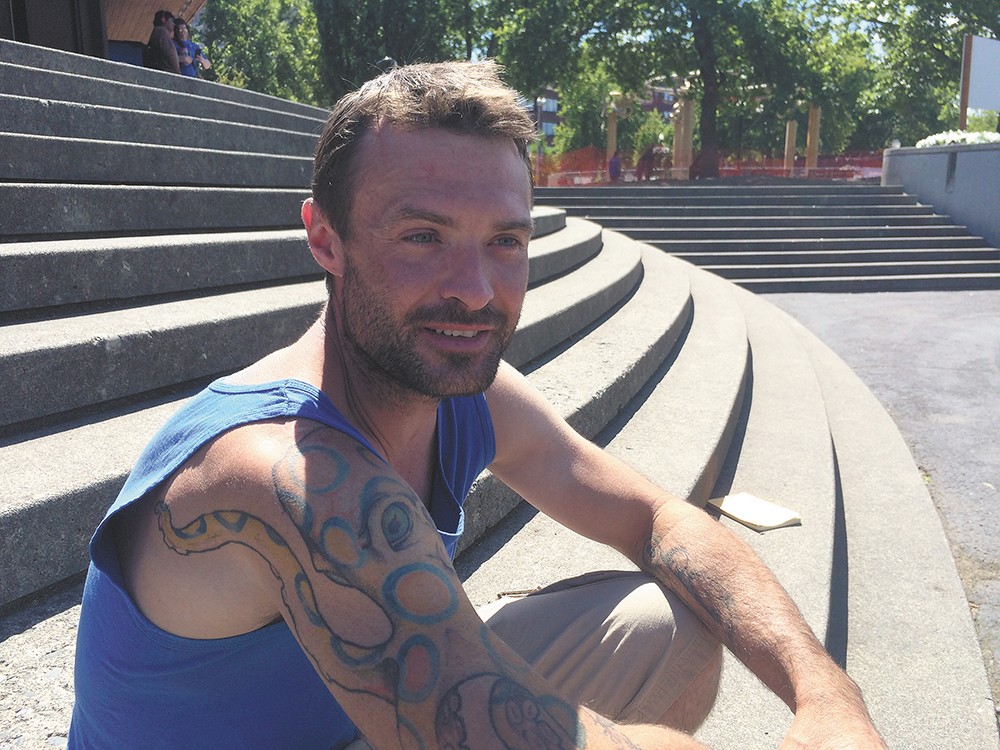 Mitch Ryals
Kasey Busch says that spending a week in jail cost him his job and his apartment.

Kasey Busch says he was a bit of a thug. He's been in trouble throughout the state, racking up charges, missing court dates and not giving two shits about the warrants.

In 2004 and 2005, he was charged in Spokane with DUI and trespassing, respectively. He was put on probation, but picked up additional charges and stopped showing up for court. Then he moved to New Orleans for work.

His daughter's mother wanted to move back to Washington state, so he followed. He avoided the law for a few more years — working when he could, living on his boat — but the warrants in Spokane and elsewhere in the state continued to haunt him. A commercial diver by trade, his skills and reputation as a hard and honest worker landed him job offers, only to be retracted when employers saw the warrants.

The final straw was the time last year when he stole a small boat and spent four months in jail.

When he got out, Busch found work, got his own place and set about quashing his decade-old warrants. He scheduled warrant recall hearings in Tacoma and Spokane, taking all-night bus rides to make it back for work in the morning. The hearings in Tacoma went smoothly. In Spokane, he appeared in front of Tripp.

He was supposed to work the next day, but instead Busch spent eight days in Spokane County Jail. That's all it took to lose his job, his apartment and his reputation.

"I'm broke, homeless and jobless again because I came over here to take care of my shit," he says after his release last week. "It was a bench warrant recall. I wasn't even trying to fight the allegations, and I was mentally prepared to do some time on this. But that would be after I had a show-cause hearing and a sentencing hearing — the steps they take before they f---ing put you in jail."

In court, Busch explained that he was trying to "grow up and face the music." He had a good job at Fishermen's Terminal in Seattle and was scheduled to be back at work the following morning.

Ethically, Tripp is not allowed to comment on pending cases, he says. However, the judge explained in open court his decision to book Busch: "I think I just have to do that, given your criminal history. I appreciate you coming here."

Busch says his release a week later was due in part to a deputy prosecutor in Seattle and former employers writing letters to the judge attesting to his character.

"In other courtrooms, it's rare to have people booked off a bench warrant recall, in my experience," says public defender Andrea Crumpler, who represented Busch after he was booked. "It seems counterproductive to book someone who is working their way back, and then says 'Enough, I'm going to resolve these legal issues.'" 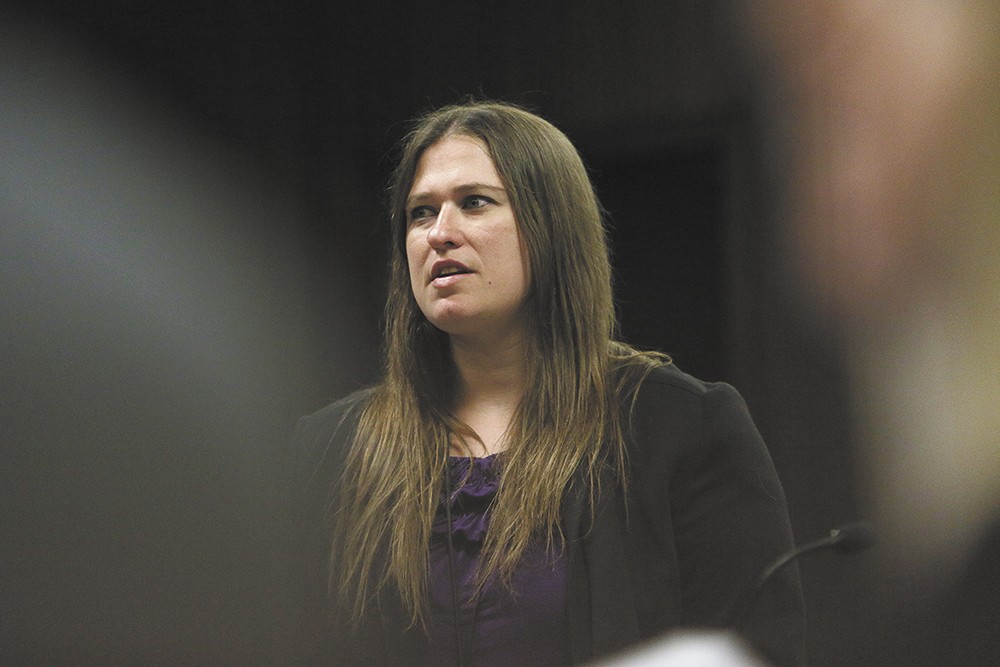 Affidavits of prejudice can only be filed before a judge has made a discretionary ruling on a case. It's one point where judges have very little discretion to say no, Tripp says.

Although it's been done before, blanketly disqualifying a judge is more of an anomaly. In the mid-1980s, then-Spokane County Prosecutor Don Brockett announced that his office would file en masse affidavits against a Superior Court judge who declared a mistrial in a murder case. Brockett did so at least twice more, after which longtime Spokane attorney Bevan Maxey wrote in the Spokesman-Review that "these tactics were used to intimidate and coerce judges into ruling for the prosecution."

The city prosecutor's office tried the same tactic in 1986 against a District Court judge for pledging to "make life miserable" for prosecutors.

At that time, the Spokane Chronicle reported that city officials said, "this is one of only a few times that a blanket disqualification has been sought against a Spokane County judge."

"I think the unfortunate thing about it all," then-Judge Charles Dorn told the Chronicle, "is that people who do this finger pointing do damage to the legal system. I think it's a disservice to the system."

Kathy Knox, who currently runs the city public defender's office, and deals almost exclusively in Municipal Court, recalls filing en masse affidavits in the past when city cases were heard by District Court judges. Knox says she hasn't had to take similar action since the courts split in 2006.

In 2013, the Blueprint for Reform, a report with suggestions to improve Spokane County's criminal justice system, called out District Court as a place "unwilling to embrace plainly needed reform, and unconcerned with the costs of jail sentences and detention before trials and probation hearings."

Dutch Wetzel, one of the co-authors of the Blueprint and a veteran criminal defense attorney, says he's had no problems with Tripp.

"I couldn't say I couldn't get a fair hearing in front of him," Wetzel says. "My impression is that he's a prosecutor's judge, but a lot of judges are like that."

Knox adds that a motion for a change of judge is only one tool for attorneys. Another is what's known as a writ of review, in which an attorney appeals a judge's decision before the case is resolved.

And in fact, the Spokane County Public Defender's Office has taken that route as well.

In a case filed last year, public defenders challenged Tripp's decision to impose pretrial DUI testing on a woman with no prior DUI criminal history.

"Not only does the testing amount to a warrantless search, but it also imposes a financial burden on the individuals who must pay for this testing," Spokane County Public Defender Karen Lindholdt argues in court documents.

The case is currently waiting to be reviewed by the Washington State Supreme Court.

A QUESTION OF FAIRNESS

The flood of recent affidavits out of the public defender's office stopped in mid-July — right around the time that Deputy Prosecutor Hannah Stearns was moved to another courtroom.

Rachel Sterett, a Spokane County deputy prosecutor who supervises attorneys in District Court, says Stearns was not moved because of public defender's motions, but because she is one of the more experienced prosecutors and was switched to handle a larger workload. However, Stearns was also booted from District Court Judge Vance Peterson's courtroom earlier this year.

"Her comment was sufficient enough to cause me concern in the appearance of fairness doctrine that I was not going to hear her cases anymore," Peterson says.

Peterson declined to comment directly on the motions filed in Tripp's courtroom, except to say that using them to avoid a prosecutor assigned to a particular courtroom is an abuse of the rule. He adds: "Bottom line is judges are supposed to be fair, though we can interpret cases many different ways. Sometimes, it makes my head hurt."

Jacquie van Wormer, the Spokane Regional Law and Justice Council administrator who has facilitated much of the reform in Spokane's criminal justice system, says the county's shift to a more data-driven system will help foster that equity.

"When you look at the aggregate, jail has a criminogenic effect on offenders," she says. "Sure, there are outliers, and incarceration can provide a community safety function, but it does not change behavior. That's why data is so important."

Tripp, for his part, says he's on board with a more offender-centric approach.

"The more information we have to make a decision, the better we can do," he says. ♦