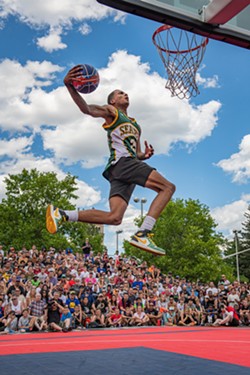 Erick Doxey photo
In 2019, Jakobe Ford was Hoopfest slam dunk champion. In 2021, he was killed by a gun that was supposed to have been surrendered under Washington's red flag laws.

Guns have a lethal relationship with domestic violence. They can be a tool for threats and intimidation, and when a firearm is present in a domestic violence situation, the partner is five times more likely to be killed, according to research published by the American Journal of Public Health.

In Washington, people served with domestic violence protection orders have to surrender their guns to law enforcement. Protection orders are civil proceedings. Survivors initiate the process, typically without a lawyer, and a judge issues the order if they find an imminent threat of harm. It's usually temporary; the courts just want to get guns out of the picture until the situation cools down. But just because a judge tells someone to do something doesn't necessarily mean they'll do it.

When faced with an order to surrender firearms, people sometimes refuse or lie and say they don't have any, says Amie Simeral, who works as a firearms investigative analyst collaborating closely with the Spokane Police Department's domestic violence unit. It's impossible to know the exact number, but Simeral says it's never a surprise to find out someone wasn't initially being honest when they claimed to not own guns.

"They think that by saying no, or by signing the declaration of non-surrender, they just don't think there's somebody watching that," Simeral says.

A few years ago, they would have been correct — there wasn't anybody watching.

But there's a gulf that exists between passing a law and actually implementing it. The original law lacked clear enforcement tools and didn't specify whose job it was to follow up and make sure respondents were actually complying with the order. Courts essentially took defendants at their word.

"It wasn't being effectively implemented because of the complexity of the systems," says Anne Levinson, a retired judge in King County who has been involved in efforts to strengthen and reform Washington's protection order and weapon surrender laws.

In 2018, King County created a dedicated task force to follow up and make sure people were actually complying with firearm surrender orders. In a three-month pilot period, they obtained more guns than during the entire previous year.

Through increased officer training and collaboration among local agencies, Spokane County has since been trying to follow King County's lead. In 2020, Spokane County stakeholders hired a domestic violence firearms investigative analyst with grant money from the Department of Justice. The position appears to have made a huge dent in the numbers: In three years, the compliance rate has increased from around 1 percent to approximately 80 percent, according to a letter from Spokane Superior Court Commissioner John Stine, who oversees weekly firearm surrender compliance hearings.

To be compliant, a person must either turn in their guns or sign a form saying they don't have any and meet the court's standards for evidence, which is often dependent on how much information the person who filed the protection order is able to provide.

Stine's letter, written in support of an application for additional grant funding from the DOJ, goes on to credit the new investigative analyst position with significantly improving the dynamic for victims. The current grant is set to expire in December.

"In all honesty, the compliance review system in Spokane County would collapse without this position," Stine wrote.

That investigative analyst position Stine is talking about — the one the entire system hinges on — is occupied by Simeral, who spent the first few months on the job hanging out in court to observe weekly firearm surrender compliance hearings. She quickly realized the system had huge gaps.

Simeral tells the Inlander there was "zero follow-up" on surrender orders when she started the job in January 2020. People rarely showed up to compliance review hearings, and even when they did, it was hard to know if the surrender forms they signed were accurate.

"Nobody was watching it; nobody was looking," Simeral says. "There were no resources set aside to look after these orders to surrender, so essentially they were just being missed."

Simeral now processes about 20 protection orders a week. Her office is in the Family Justice Center at the Spokane YWCA, where she collaborates on cases alongside prosecutors and detectives from the city of Spokane and Spokane County. There's no central registry of firearm ownership. Figuring out if someone is being honest about whether or not they own guns (and if so how many) takes a lot of digging.

There's a Second Amendment culture of individual liberty in the Spokane area that makes people strongly attached to their guns, Simeral says. Convincing people to turn them in remains an uphill battle. So she tries to stress to respondents that the cops aren't taking people's guns, they're just holding on to them until the unsafe situation passes. Still, it's a hard mindset to overcome; people will often try to sell their guns or give them to friends, which isn't allowed.

COME AND TAKE IT

Simeral's investigative work appears to have made a huge dent, but she's just one person in a county with one of the highest rates of domestic violence in the state. It's impossible to verify everyone, and guns still slip through the cracks.

Sometimes people will just flat out refuse to give them up. Sgt. Jordan Ferguson from the Spokane Police Department's domestic violence unit remembers one case from last year, when a respondent wrote "from my cold dead fingers" on a firearm surrender declaration he was supposed to be signing. He turned it into the clerk and was out the door before security could catch him. He still has an active warrant.

Ferguson remembers one man who, after telling the court he didn't have any guns, was caught on security footage a week later trying to sell his handgun at a pawn shop.

When potentially unstable individuals fail to surrender their firearms, the consequences can be fatal. In August 2021, Jakobe Ford — who won the Hoopfest slam dunk contest in 2019 — was shot and killed in downtown Spokane. The alleged shooter had been ordered to turn in his firearms as part of a domestic violence no-contact order — filed by the alleged shooter's ex-girlfriend who later dated Ford — in February of that year, but didn't comply.

In recent years, a series of reforms have strengthened protection order laws in Washington, making it easier for judicial officers to access information about someone's firearms. When possible, police are now required to ask people to surrender their firearms when they come to notify them of a protection order. When an officer can't verify compliance, the courts will follow up.

Along with domestic violence, people can seek protection orders for things like stalking, anti-harassment and extreme risk protection — often referred to broadly as red flag laws. Washington House Bill 1320, which will go into effect July 1, seeks to simplify protection orders by rolling all of those categories into one. The bill aims to streamline other aspects of the process and make it easier for survivors to navigate the system.

Under federal law, people can be prohibited from buying guns because of domestic violence convictions, but there's no requirement that people who aren't allowed to buy guns turn in the weapons they already have. Washington also allows for temporary protection orders, meaning a survivor can get immediate protection for up to 14 days without a hearing. That two-week period is when risk is often highest, Levinson says.

Washington is one of 19 states that have laws addressing the so-called "boyfriend loophole" that is currently under discussion as part of broader gun reform talks in the U.S. Senate. Federal restrictions on gun purchases only apply to domestic abusers who have been married to, lived with or had a child with the victim. It doesn't address other types of intimate relationships.

Getting firearms out of abusers' hands is crucial for the survivor's safety, says Tiffany Yamase, a legal advocate and prevention specialist with the Spokane YWCA. In more than half of all mass shootings between 2009 and 2020, the perpetrator also shot an intimate partner or family member. ♦