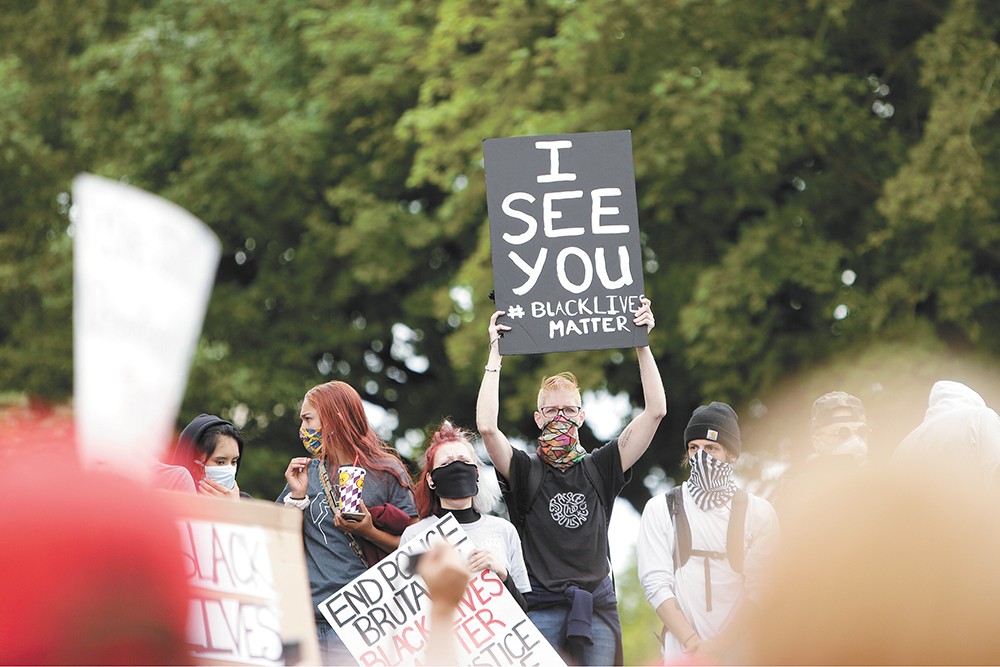 Young Kwak photo
Demonstrators in Spokane on May 31.

During the last few months at home in quarantine, I've been thinking about what it means to be sheltered. How it feels to be stuck in place. Shelter, as in respite, a roof and four walls, protection from the elements, or in our case a virus. Place, as in geography, a physical place to stay put, stay safe. Since March, like you, I have been sheltered in place. It's been moderately uncomfortable, but not unpleasant.

But then a black man was killed, then another, then a black woman. Perhaps it was just one death too many. Perhaps I was finally paying attention. But, like many Americans, I felt (and feel) compelled to get up and move. It is no longer possible for me to remain stationary and watch this parade of deaths, each increasingly outrageous for its blatant disregard for life, liberty and the pursuit of anything resembling happiness.

But move how? For the second time in just a few months, I have been asked to set aside my plans and priorities: my interest in rivers, my worries over climate change, my efforts to raise my children. The truth is there are a hundred other things I would rather do than think about racism and our democracy and the 450 years of harm our country has systemically imposed on people of color. I want it to be someone else's problem. And when I admit that to myself, I see the outlines of my shelter. Standing under a solid roof on the outskirts of one of the whitest cities in the United States, I don't have to think about George Floyd. I choose to. Even reluctantly.

I am now drinking from the firehose of avoided learning. It is not a pleasant experience. I am being asked to examine deeply held assumptions about myself and my sense of meaning and purpose. I am asking myself if I am willing to be changed by what I'm learning, and if so, what that looks like. Previously, I had never put racism at the center of things I care about. I have been much more concerned about the future habitability of the planet: wildfires, rising sea levels, mass extinctions. These are real and dire concerns, which I concede must seem irrelevant to a mother whose black son has just left the house for a jog or a walk or a drive.

I am looking more closely at the extent to which this country has left people outside, unsheltered, exposed to the whims and suspicions of a populace consumed by fear. Bombarded with unsolicited questions, pelted with comments, and saturated with conjecture over whether their lives matter and by how much. Even the huge marches and protests, the arrests, the disbanding of police departments, as promising as these actions are, do not provide relief or shelter. Rather, they shine a bright light on the place, and by that I mean, station or standing, that have been offered to people who are considered white versus people who are considered black.

It is painful to sit in this light. For in the very act of validating injustice, of saying yes, we see this too, we have now made it more real, which can make it unbearable. We were all born into a place we did not choose, and it should feel just as uncomfortable to be safe for being white as it is to be unsafe for being black. One's sense of progress is tempered by the exhaustion of having seen it all before. All this supposed movement, motion, and momentum: Who has the stamina to run endlessly in place?

I am buoyed by one thing. We have proven ourselves capable of stopping the world to avoid future harm. We have endured hardship, job loss, economic collapse, virtual learning, Zoom conference calls, and loneliness to prevent, even just to delay, untimely deaths of total strangers. We have done this because we understand that we are connected to each other, even in the most ethereal ways: on the currents of air, a song, our breath. We protect each other because we know it is the only way to protect ourselves.

I have spent a lifetime being sheltered in place. And now I, like all my fellow white citizens, am being called to build a bigger shelter, to replace systems and strategies that make other people vulnerable. We are being called to do this in the midst of a public health emergency because it's all a public health emergency. If we can enact drastic measures to prevent future harm from a virus, surely we can take action to prevent future harm from racist institutions and, while we're at it, from ways of living that are destroying the place, the planet, on which we all live. What's required is a reframing of purpose and responsibility. And above all a commitment to rethink what it means to be sheltered and whether we want to continue moving in place. ♦

Heidi Lasher is a freelance writer, editor and communications consultant. She is working on an MFA in nonfiction writing at Eastern Washington University. She lives in Spokane with her family.