Forro in the Dark brings the world-famous parties of Brazil to you.

Jorge Continentino (far left) and Forro in the Dark.

The music and dancing of Brazil — samba, bossa nova, sultry Brazilian jazz — are known worldwide for being hip-shakingly sensual. But forró (pronounced fo-ho), a music/ dance combination from northeastern Brazil, is less famous outside of its home country. Forro in the Dark aims to change that.

The Brazilian-born, New York City-based band started when percussionist and co-founder Mauro Refosco had a birthday party at an East Village nightclub called Nublu. He invited a group of his friends — including a few fellow Brazilian expats — to come along and play music, forró-style.

The resulting concoction led to a weekly residence there: Refosco and a rotating cast of his pals playing forró for Nublu’s hipster patrons. Forró is Brazilian party music traditionally played with a few simple instruments: a drum, a triangle and an accordion. It features a rapid,

dance-friendly rhythm and vocals that usually touch on themes relevant to the working-class heroes and rebels of northeastern Brazil.

New Yorkers took notice. “At the beginning, it was a casual collaboration,” says Jorge Continentino, who plays a Brazilian flute called a pifano as well as contributing on saxophone and vocals. “But forró is such catchy music and great for dancing, so that’s how this band — this movement — got started.”

The music was so catchy the band soon made a serious buzz in the New York musical community. Before long, luminaries like David Byrne, Beck and John Zorn took in the band’s performances and solicited its members for collaborative projects. Byrne even lent his vocal talents to Forro’s first album, The Bonfires of Sao Joao. Guitarist Smokey Hormel (Beck, Tom Waits), Bebel Gilberto and Cibo Matto’s Miho Hatori, along with New York singer-songwriter Jesse Harris (of Norah Jones fame) have been featured collaborators.

And forró itself includes several variations — including the infamous “forbidden dance” — that can be pulled out depending on the occasion. Despite the conventions of traditional forró, Forro in the Dark incorporates different elements into the music: Continentino’s pifano flute and Monteiro’s guitar, for instance, creating a kind of hybrid that still stays true to the original spirit of forró.

“Our instruments, our way of writing songs is very connected to those roots,” says Refosco, who also moonlights as a percussionist in Thom Yorke’s supergroup Atoms for Peace. “But our approach to playing and our attitude and energy comes from rock-and-roll.”

While the overall feel of their most recent album, 2009’s Light a Candle, is distinctly Brazilian, there are liberal doses of dub, country western and rock-and-roll — not to mention a score of subtler nods to different genres.

So it makes sense that Forro in the Dark is opening for Gypsy-punk ensemble Gogol Bordello on its current tour. The two bands share a kindred penchant for incorporating non-traditional elements into traditional folk music.

“We are very excited to tour with Gogol Bordello,” Continentino says. “Our music and their music have a similar root, I think. And [Gogol Bordello] really likes us. It’s a good opportunity because we get to play for a different crowd. It’s always good to expand.”

Two to the Fore 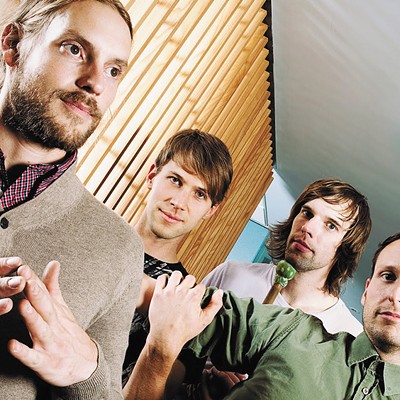 A Stranger in His Own Mind