The Coeur d'Alene artist spends a lot of time in the forest, painting its inhabitants 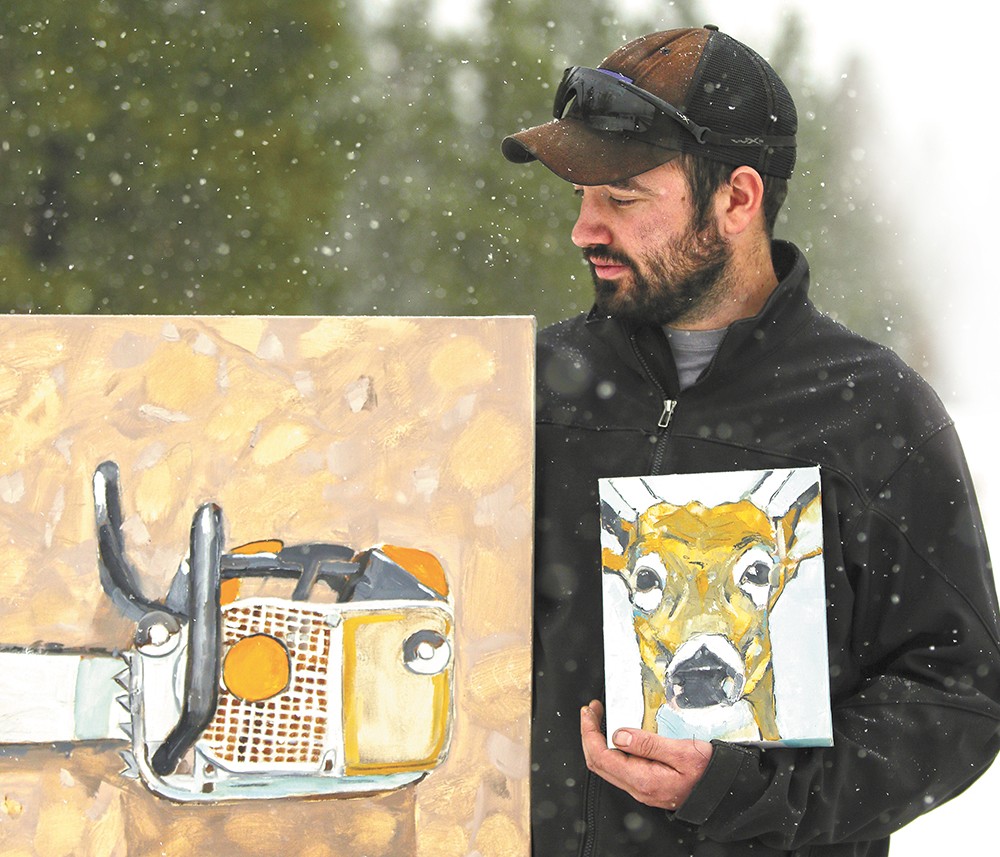 Young Kwak
Jeff Weir with two of his oil paintings.

arborist Jeff Weir knows two seasons: summer, when a typical workday can be sunup to sundown, and winter, when he might not work at all.

Back in November, the 23-year-old Weir, who hadn't had more than two days off since Memorial Day, was really looking forward to a break from pruning branches and tree removal. Then the windstorm hit.

"I worked so hard all summer and was so excited to paint," says Weir, whose images of bear, elk and foxes first grabbed our attention at a North Idaho coffee shop.

Although he hunts some, spends time with his bride of one year, Katerina, and is still trying to get his own tree-service business off the ground, what Weir really likes to do during his off-season is work on his art.

"I'm an impressionist," says the mostly self-taught artist, who credits his great-grandmother, Orvilla Weir, and local artist Kyle Paliotto with helping him develop his style.

His great-grandmother, he says, was the president of arts clubs and taught college classes in Ventura, California. She left him a prized scrapbook of her photos, color palettes, and carefully annotated mixing instructions, such as which colors make the best deer fur.

Weir met Paliotto four years ago while on a tree-service job at Paliotto's residence. He didn't know Paliotto had won awards from the prestigious C.M. Russell auction and the American Impressionist Society, but admired the elder artist's work. The two struck up a friendship.

"Jeff brings an unadulterated freshness to the canvas," says Paliotto, who shares Weir's love of the outdoors and is known for his en plein air paintings.

Paliotto recounts the first time he saw Weir working on a piece: a commission for a 25-foot alligator sculpture made out of wood.

"I found him with a fire going, his chainsaws out, and a can of beans on the fire for lunch," Paliotto says. "He scratched his head over the correctness of the alligator's anatomy, but I could see his heart and soul were transferring to the piece, and it was already hugely successful."

"I have a tendency to drive over to his house unannounced, clear out a space in the storage room of his studio, change the radio, and start bugging him," says Weir.

Weir doesn't do much chainsaw carving these days, preferring a palette knife to carving tools. His studio is actually a desk in his living room. Or it's the living room floor when he's working on a large painting, like the ones for a January show entitled Jeff/Jeff, a collaboration with Coeur d'Alene artist Jeff Spencer at Emerge. 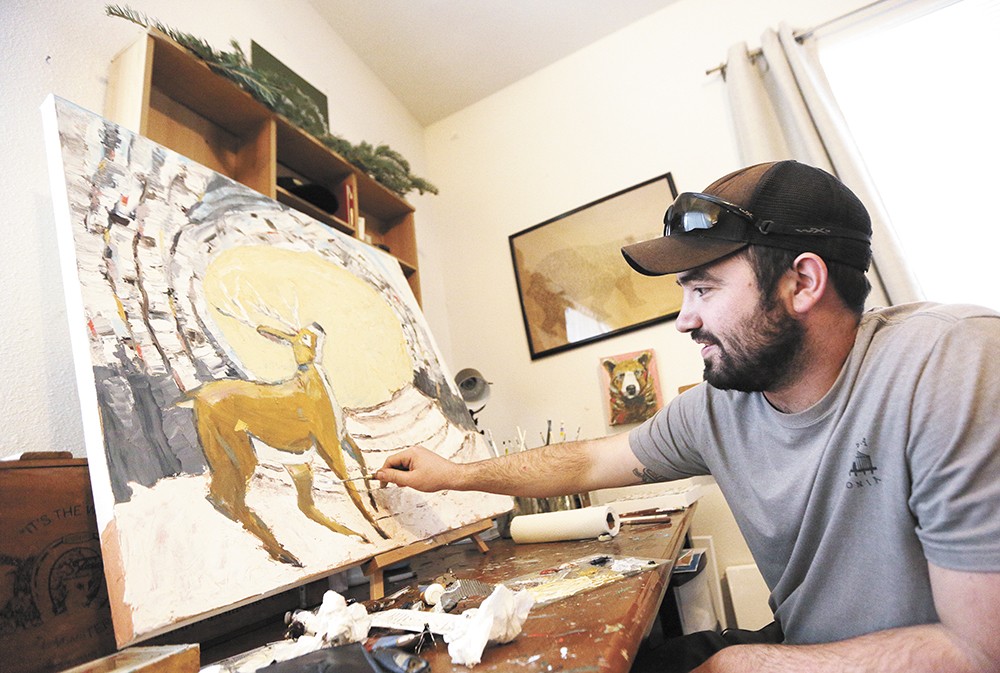 Young Kwak
Jeff Weir at work in his home studio in Post Falls.

This will be the second time Weir has shown work at Emerge; the first was at the nonprofit organization's annual pop-up show this past summer. The plan, says Weir, is to continue honing his oil-painting skills with his characteristically expressive, sometimes humorous wildlife paintings.

"I always like playing with angle of eyebrows," Weir says of the bear in a recent painting, whose seemingly pensive expression contrasts strongly with his mammoth size on the canvas. Weir also likes creating contrast with warm and cool colors, such as the bear's golden fur and the cool blues and white of the snowy ground he is walking on:

"The outdoors have always been the biggest inspiration to what I paint."♦