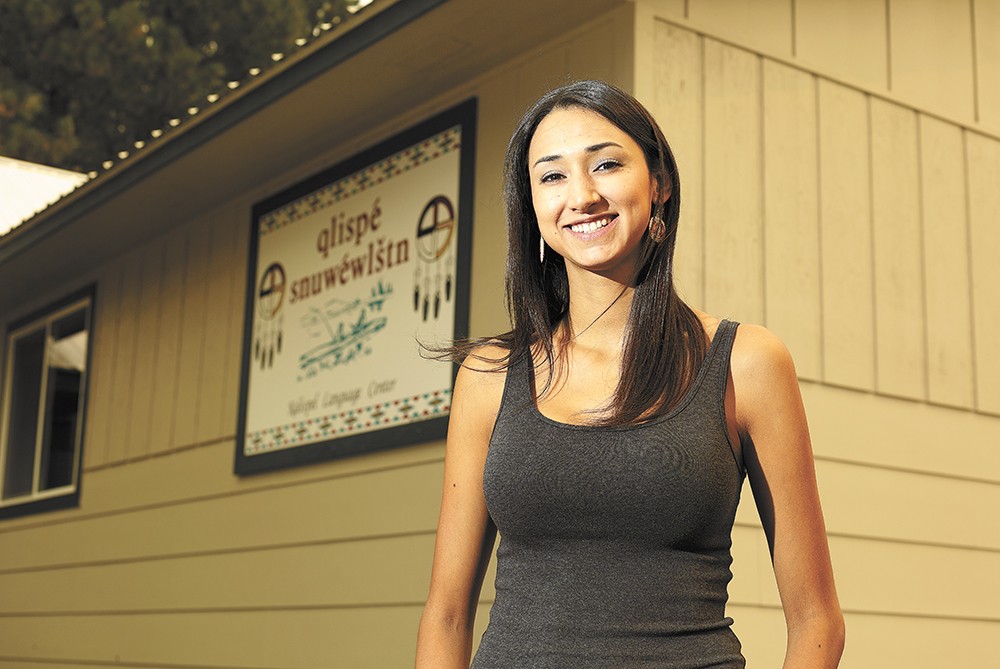 Young Kwak
Jessie Isadore began teaching Salish as soon as she began learning the language herself.

Today, Isadore (formerly Fountain) speaks the Qlispe dialect of the Interior Salish language most of the time, preferring it over English because there are words and phrases in Salish that English simply doesn't have.

Speaking Salish is far from being just a personal preference for Isadore. It's a desperate but sincere promise she made to herself years ago, to preserve the nearly extinct language and pass it on to her children's generation, and all generations of Kalispels beyond.

After that first introduction to Salish when she was 18, Isadore grasped tightly onto the language, and began teaching it to the children at the tribe's childcare center where she worked. She started standing in for the tribe's language program director, JR Bluff, at his Salish classes at Cusick High School, where students of any background can take the courses for foreign language credit. Now, Isadore is a leading figure in the Kalispel Tribe's cultural department as its language program coordinator and a lead instructor, teaching advanced classes for adults.

"That's just how our program works. As soon as we teach you, we want you to teach someone else," she says, leaning back from a desk piled with three-ring binders of lessons and sorted stacks of tests from the six students she's currently leading through an 18-month intensive language program. The course meets five days a week, from 7 am to noon.

"We want people to share everything that they know. It started out with just JR and me, and now we're growing and we've created a language community," she adds.

Classes through the tribe's language program are offered at no cost to anyone — native or non-native — who wishes to learn. While there's still a long path ahead of Isadore and her peers to return Salish to its prominence of past generations, the impact of their efforts already can be heard and felt across the region.

"Before, it was only spoken at specific cultural events: funerals, wakes, memorials, gatherings, and only spoken by elders," Isadore says. "But now, the language is spoken everywhere — down at the tribal office, at the wellness center, people speak to each other at the store, the post office. And it's not just the elders speaking, it's our kids, and that's what's awesome. We're bringing it back — the kids are bringing it back."

Born in Spokane but raised in Houston until she was 11, Isadore and her family came home then to visit family. In awe of all of the tribe's cultural traditions she'd been missing in Texas, Isadore decided she wanted to stay on the reservation at Usk, Washington, and lived with her grandmother until she was 18. Despite her grandmother's semi-fluency in Salish, Isadore says she never spoke to her in their native language.

"I didn't know any of the ways; the culture. So the language opened the door for me," she reflects. "It gave me a sense of belonging — my identity, my spiritual connection, my physical connection to the people and the land here... I know what the language has done for me in my own life, and I just want to share that."

Although she's far from the traditional age at which a member of the tribe would be considered an elder — a person respected and looked up to for their knowledge and wisdom — Isadore humbly admits that many of her peers call her a "little elder" or a "mini-elder," and look to her for the kinds of guidance an elder traditionally provides.

Johnny Arlee, an elder with the Flathead Tribe in Montana, one of the seven Interior Salish tribes, has worked with the Kalispel's language program for eight years. He envisions Isadore carrying the language of their people into the future.

"I saw a time where I thought, 'My gosh,' it's going to end soon. Nobody cares, nobody is wanting to learn," Arlee says softly. "It won't be long that I'm here on Earth — it'll be Jessie and the others carrying this on. They're the next elders."

Isadore truly believes a time will come in which all children born into the culture will be raised in Salish, like her great-great grandmother raised her grandmother. For this reason, Isadore is only speaking Salish to her 1-year-old daughter, Evelynn. Her 4-year-old son, William, also has heard the words since the day he was born; he now speaks both Salish and English.

"My ultimate goal is to not teach anymore. I want there to be a day — there will be a day — when I no longer teach language, but it's just alive in the community again." ♦

Positions: "I work in the culture department for the Kalispel Tribe, as the language program coordinator. I organize and facilitate the culture camp and other cultural gatherings. I am also in charge of salmon distribution for my tribe."

I give back because... "I do the work, if you can even call it that, for my elders and my ancestors. All those who are still here and those who have passed on. I know the importance of our language and our culture; it is our identity as native people. And it is vital in building a strong, healthy community... If we all keep taking without giving anything back, there will be nothing left to share."

I look up to... "my elders and several of my peers. All of those who are fighting to keep our traditions, our ways and our languages alive."

I wish that... "my elders would be here forever, but it's just not the case. And that's why I feel it's so important to take the time to listen to them and all that they have to share."