Learning on the Job

Billy Sexton is one of the more familiar faces

For years, he's been riding the Spokane streets on a "Pee-wee Herman-style" cruiser bicycle, handing out sandwiches and talking with people down on their luck. At Christmas, you might spot him handing out presents, Santa-style.

The grassroots activism suited Sexton just fine, but as he started to think about bigger projects with the potential to make a more dramatic difference, he decided to make it "official" and formed Solution is Hours. It's based on the idea, stated on its website, that "if everyone spent at least one hour a month making their community a better place, we would create the society we all wanted." By organizing volunteers and doing a lot of work, Sexton and the organization provide nearly 3,000 meals monthly to people experiencing homelessness.

Making it official meant Solution is Hours getting 501(c)(3) nonprofit status earlier this year, a process entailing "a lot of paperwork," Sexton says. But he says the work was worth it.

"I really like the accountability it holds you to with the IRS," Sexton says. "It makes us stay more in-line, and now we don't have to worry about taxes so much. It gives us more freedom to get monetary donations."

Next for Sexton is implementing one of his big ideas, starting a work program where "we just run around, pick some homeless guys up, take them out to clean up the streets or have people hire them to do labor, and we'll pay them $12 or $13 an hour, paying them at the end of the day, dropping them off at the shelter and picking them back up in the morning." 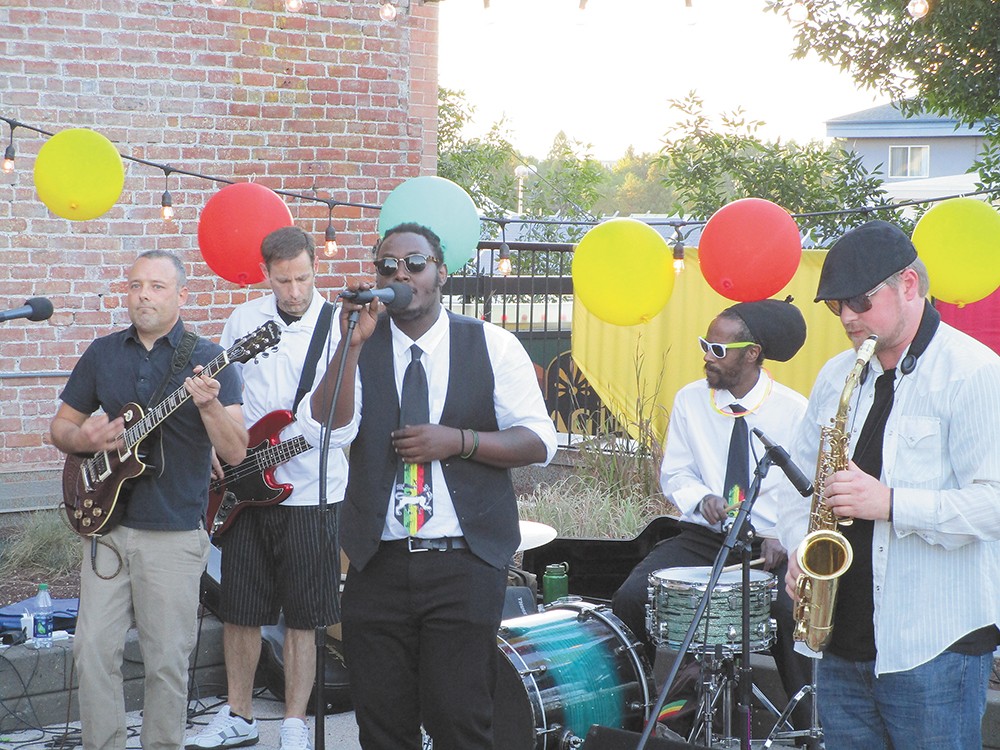 Dan Nailen
Omy's ban playing at a recent fundraiser on the Saranac rooftop.

was a big step for another Spokane nonprofit startup. Less than a year after Sam and Omy Karorero started Impanda, an organization dedicated to improving the lives of street kids in Omy's native Rwanda and in his adopted home here, they've seen some small successes. They raised money for Omy to travel to Rwanda to deliver school supplies to kids living in the harsh street environs he once endured as an orphan of the Rwandan genocide. Once there, Omy found he could provide health care for kids for $15 a year, and Impanda was able to pony up for 50 kids. And they navigated the organization to 501(c)(3) status through the help of a lawyer on Impanda's board, Sam says.

Those are all baby steps toward the couple's vision of building a center for music and art therapy in Rwanda. Hence their presence on the Saranac rooftop one recent evening for dinner, drinks, dancing to Omy's band and a pitch from Sam to donate to the cause — fundraising being a necessary evil for anyone interested in helping others.

"We started Impanda a year ago, and I haven't been able to ask people for money," Sam tells the 150 or so attendees. "But we all know it takes money to do something. We will take that money and I promise you that we will honor it, and we will use it to do good."

The next day, Sam admits that the work toward Impanda's ultimate goal can be frustratingly slow, but she recognizes that any new organization has to establish itself in order to gain donors' trust.

"We're finding strategic ways to make an impact while we build this foundation," she says.

of running Breast Intentions, an organization dedicated to helping underprivileged women get a properly fitted bra. But the dramatic growth in the group's work in the first 18 months of its existence means it's necessary. The group's first event helped 35 women, and the two most recent saw 96 and 60 women sign up for help, "so there's a huge need," Weaver says. "I don't like begging for money, but it is the only way we can do what we do."

Breast Intentions evolved out of an experience Weaver had while working with Catholic Charities. Taking a poor woman to buy a dress for a gala, Weaver discovered the woman's bra was two sizes off, and she realized that many women were in the same position, relying on donated bras or buying them from discount racks with no regard to proper sizing. "For women, if we don't have a bra that fits us that's comfortable, then we're insecure in who we are," Weaver says.

Nearly two years in, and despite the obvious need for the program, Weaver is finding it hard to get big stores involved in her cause. JC Penney donated fitters for a recent event in Richland, she says, and "I really wish we could get that kind of enthusiasm from the big-box stores here, but we haven't really been able to."

Even so, she adds, "I didn't think two years ago that it would grow into what it is now. I really love what we do."

Jamie McAtee says she knew nothing

about being a business owner or entrepreneur when she started Rescue4All three years ago. The group is dedicated to saving unadoptable dogs before they're euthanized by finding foster homes and paying for food and necessary medical services. Inspired by time spent volunteering at the Spokane Humane Society, McAtee solicited friends and family via social media for advice on starting up.

"It was a learning curve the whole way," McAtee says. "There were some fumbles, but we went live with the website and live with the Facebook page, and I was just like, 'Hey, I don't know how this is going to go, but these are the dogs we're going to try and save.' And within the first week, we raised about $2,000."

Since then, Rescue4All has saved 160 animals, including two horses, and is able to support itself, debt-free, by soliciting foster homes and donations from its 5,000 Facebook followers, and by working with other local rescue groups.

The process of starting Rescue4All has been an education, McAtee says: "A lot of people don't know about the business side of it." She's learned a lot about how to do business and "making sure your doors stay open so you can last four, five, six years." ♦