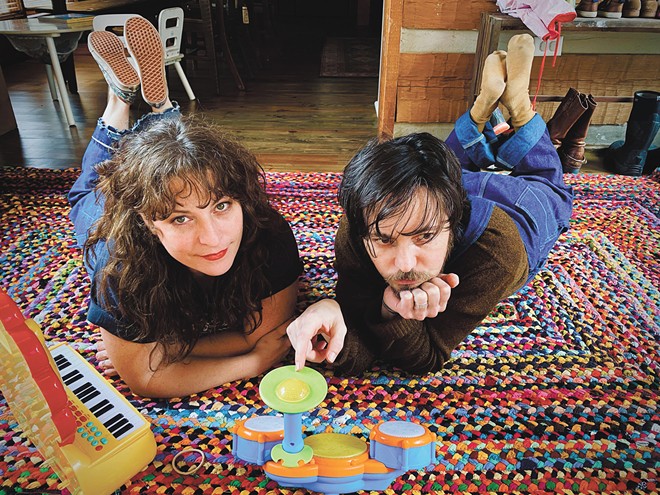 Shovels & Rope weren't at all bored during the pandemic.

I can't tell you exactly the first time I heard Shovels & Rope. I have a crew of friends who are into bands that straddle the line of indie-rock and so-called "alt-country," and any one of them might have pushed some music in my hand and said, "Hey, I think you'll like this."

I can, however, tell you exactly the first time I saw Shovels & Rope live. That was just a couple years ago, April 25, 2019 to be exact, when they happened to be playing an old theater the night I flew into New Orleans with some friends. Obviously seeing a great show when you're starting what you hope to be an epic vacation will always stick out in your memory as probably better than it actually was. Even so, Shovels & Rope (Carrie Ann Hurst and Michael Trent) converted me from a casual listener into a fan who always wants to hear what they're up to going forward. So potent was their approach, so epic their dusty, bluesy, folk-tinged sound despite only being a duo, I've even started eyeballing the little festival they curate in their Charleston, South Carolina, hometown.

Shovels & Rope are come to Spokane Tuesday, Oct. 5, on what they're calling the "Bare Bones Tour," saying they're only going to bring guitar, piano and their two voices to deliver a set of old favorites, deep cuts and potentially some new pandemic-penned tunes.

"Rooms will be a bit more intimate, and we are all probably going to be a bit more quiet in volume, but just as loud in spirit," the couple posted via Facebook, and you can bet that their songs will lose none of their power for lack of drums. In fact, seeing Shovels & Rope in an intimate setting like the Lucky You Lounge has the potential to make for one of those shows you talk about for years to come. Shovels & Rope play Tuesday, Oct. 5, at 8 pm. Tickets are $29.50 in advance, and are available at luckyyoulounge.com.

Shovels & Rope arriving on their first tour since the COVID outbreak is pretty great, but there are enough other noteworthy shows also hitting Spokane in the next week to make it seem like some sense of normality is returning, even though that new normal often (thankfully) involves vaccine checks and masks for indoor shows for the time being. Here are a few of the other options in the coming days:

Oct. 1
DOOBIE BROTHERS
The Doobie Brothers are celebrating 50 years together with this trek, and the band behind hits ranging from "China Grove" to "Black Water" to "What a Fool Believes" has a lot of ground to cover in concert. They've undergone some lineup changes and different members leaving and re-entering the fray through the years, but the core four of Tom Johnston, Michael McDonald, Pat Simmons and John McFee are all on board for the first time in more than 25 years for a tour that includes the brilliant Dirty Dozen Brass Band opening. Spokane Arena, $60-$200, 7:30 pm, spokanearena.com

Oct. 1
LOUDERMILK
I don't know how many bands from the Tri-Cities found themselves with major-label deals and tours supporting the likes of Megadeth and Mötley Crüe, despite not being a metal band, back in the day. I can say Loudermilk is the only one I know of, and their The Red Record made some noise upon its release back in 2002 — the kind of noise that landed them on Dawson's Creek and Charmed. The WB loved Loudermilk! The band changed names and then split up for 14 years, but they're back and doing a tour of the Pacific Northwest to recapture the old good vibes, and maybe launch a new era for the band. Alert the CW. Lucky You Lounge with The Ladybird Unition and Moth, $18, 8 pm, 21+, luckyyoulounge.com.

Oct. 2
TENNIS
Hard to believe it's been 10 years since this Denver-based husband-and-wife team delivered their debut album, Cape Dory. The themes of that album were inspired by a sailing trip early in their coupledom, and they've occasionally returned to nautical noises through the years as they've explored all manner of pop styles. Their pretty excellent 2020 release Swimmer arrived just weeks before the pandemic hit full force, and the long-delayed supporting tour is finally on, including this stop in Spokane. Knitting Factory, $20, all ages sp.knittingfactory.com.

Oct. 3
SPOKANE STRING QUARTET
It's been awhile since these four ace musicians, all members of the Spokane Symphony, have been able to perform together as the more intimate Spokane String Quartet, but that changes Sunday afternoon with a program that includes Mozart's "String Quartet No. 15 in D Minor," Frank Bridge's "Novelleten" and Mendelssohn's "String Quartet in D Major." The group has been around since 1979, and currently includes violinists Mateusz Wolski and Amanda Howard-Phillips, violist Jeannette Wee-Yang and cellist Helen Byrne. Martin Woldson Theater at the Fox, $12-$20, 3 pm, spokanestringquartet.org.

Oct. 5
BLACK LABEL SOCIETY, OBITUARY, PRONG
Metal is the order of the day with this show headlined by the long-running project of guitarist/singer Zakk Wylde, one of the most popular characters in hard rock ever since he appeared as a teen phenom playing aside Ozzy Osbourne. The band is prepping the release of its 11th album in November, Doom Crew Inc., and is hitting the road with fellow headbangers Obituary and Prong (whose "Snap Your Fingers, Snap Your Neck" remains a serious jam). Knitting Factory, $35, 8 pm, all ages, sp.knittingfactory.com.

Oct. 6
MEEK
Denver's Meek lands somewhere between performance art and rock 'n' roll, but you can call me utterly intrigued by the idea that they call their shows a "subversive queer performance" and that they use sensors attached to drums to trigger a range of sounds. Their music on Bandcamp veers from distorted punk-ish rave-ups to off-kilter dance tracks. They'll be joined by Sparrow and Wallower. Baby Bar, $10, 9:30 pm, 21+, Facebook.com: Baby Bar Spokane. ♦