How kids in Washington fall through the state's child welfare system, and the new law intended to plug the gaps 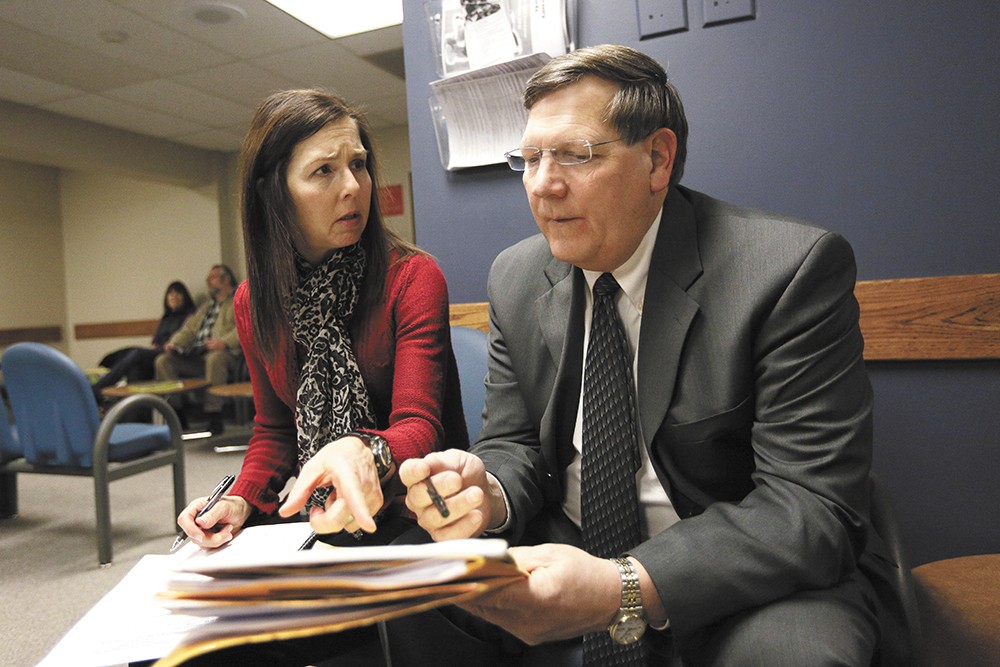 When parents refuse to pick up their kids from juvenile detention in Washington state, the facility calls the Department of Social and Health Services. By law, kids can only be released to a "responsible adult" or DSHS. Sometimes, though, DSHS refuses to pick up kids if their cases don't meet the strict definition of abuse, neglect or abandonment.

This happens about 100 times a year in Spokane County, according to Mark Lewis, manager of the Juvenile Detention Center. When it does, the kids become homeless.

"This problem is not new," Lewis says. "In Spokane, it's been a challenge for decades."

The problem is not new for other counties throughout the state, either. According to a recent report from Columbia Legal Services, a legal aid organization, parents refused to pick up 417 kids from detention in Pierce County in 2014. For 146 more kids, a parent or guardian could not be reached. Additionally, of the kids statewide left with no one to pick them up, fewer than 50 percent qualified for help from DSHS in 2014, the report says.

The report lists other holes in the state's system that restrict DSHS in its legal responsibility, and allow some kids to fall into homelessness:

• If DSHS determines that a youth qualifies for state services and placement, there is no guarantee that the kid will live anywhere other than a Crisis Residential Center, which is intended as a temporary solution.

• Kids whose parents won't allow them to come home can fall short of DSHS's threshold for "abandonment," one of the three criteria in state law that requires intervention.

• Sometimes judges will order juveniles to be released from detention, but they are held anyway to protect them from homelessness. This is unconstitutional, the report argues.

• There is no statewide mechanism to help youth who don't qualify for DSHS services when they are released from detention with no parent to pick them up.

Kids who have no place else to go end up shuffled between temporary shelters, couch surfing with friends and family, or on the streets. Until recently, no statewide agency addressed youth homelessness, but a new law that went into effect in July created the Office of Youth Homeless Prevention and Protection Programs. Mary Van Cleve, an attorney with Columbia Youth Services and author of the report, is optimistic about the new effort.

"I think it's a real positive first step forward," she says. "It consolidates focus on homeless youth policy and programs so there can be some statewide coordination."

Dave Carter is frustrated. The veteran public defender has been battling DSHS for decades, trying to get juveniles shelter, food and safety.

"There's a huge gap in our county for teenagers who don't have a place to live because the Department will not file dependency petitions on them, even though they have a statutory obligation to do so," Carter says. "We really are struggling here to make sure these kids have a place to go, and the Department has basically washed their hands of teenagers."

In November, less than a month before the hearing in front of Cozza, the commissioner informally ruled that TW, identified here by her initials to protect her identity, fit the definition of an "abandoned" child. Her mother told the commissioner that TW was no longer welcome at home, and that she wanted to sign away her parental rights. The commissioner then ordered DSHS to find a place for TW to live.

DSHS challenged the ruling, saying the court has no legal authority to do so while TW's child-in-need-of-services petition was pending. The problem, Carter says, is that without help from DSHS, TW was walking out of the courtroom that day with nowhere to go.

Cozza's agreement with the juvenile commissioner is a big victory for Carter.

"Now when this comes up again in court — and it will — I can say, 'We've already litigated this, commissioners have the authority to order the Department to place kids,'" Carter says. "So they're not just going out on the street."

There's no doubt there are gaps in the system. Kids who seem to qualify for state services often don't. From Jan. 1 through Dec. 20, 2015, for example, only 43 percent of cases qualified for state services, according to DSHS. That means 53,602 cases weren't dire enough for DSHS to get involved. But even when it does, the solutions aren't always simple.

Colton, 16, has cycled through foster care, detention and his mother's custody since he was 2. He's been homeless — crashing with friends or wherever he can find a place to stay — since last spring. He hasn't seen or spoken to his mom since she kicked him out.

"I feel like I haven't really been free my whole life," says Colton. (His last name is being withheld because he's a minor.)

Colton is telling his story from Spokane's Juvenile Detention Center in late December. He has history of drug and alcohol use, missed school and fighting. Most recently, he was arrested for stealing diapers from Fred Meyer. A friend's baby was using a T-shirt as a diaper, and he wanted to help. He slugged the security guard on the way out, bumping his charge up to burglary, a felony.

In a few days he'll be transferred across the state to a Juvenile Rehabilitation facility, where he'll stay for at least one year. He could work toward a GED, get drug treatment and try to get his life together, but when he gets out he'll still be homeless.

He says he wants DSHS to help him find a place to stay, but he's not very enthusiastic about his options through the state: a group home or foster care.

"You're mixed with a bunch of other kids with problems. They're always telling you what to do and a lot of the rules are unfair," he says.

He could stay with friends, but that's not really a good option either. Most of them are drug addicts, too. He's seen changes in his buddies who've been through treatment programs, but still, he's unsure if he can kick his addiction — or even wants to. He started smoking meth when he was 13.

"Honestly, I don't really feel like I have any other options," he says. "I feel like everything that's gone on in my life, I'm not really going to make it anywhere else, so I just switch to doing drugs because that's something I'm good at — just get high for a little bit."

"Some kids would rather live on the street than follow the rules imposed by a parent or foster home or shelter," she says. "I think we're seeing in our kids the extent of their suffering, and the sooner we can identify their problems and how to intervene, the better."

In Idaho, the situation is a little different. Jay Logsdon, a Kootenai County public defender, says that detention centers will hold kids past their release dates until they can find a foster placement.

For Howard Belodoff, a Boise attorney who's handled juvenile and mental health cases for 35 years, sometimes the best option is to have kids arrested. Once they enter the juvenile justice system, he says, the courts can order Idaho's Department of Health and Welfare to find housing.

"There's a cascading effect," he says. "Typically these kids weren't brought up in a stable home, and they go into a system that doesn't really provide stability. These problems exist all over the place, and Idaho is not immune to that."

For kids walking out of detention into homelessness in Spokane, Lewis, the juvenile detention manager, has established an informal agreement with Crosswalk, the youth homeless shelter downtown.

When DSHS refuses to help, a Crosswalk staff member will pick the kid up, give him or her a tour and talk about what the place has to offer: a safe bed, shower and food.

"It's not a home, but it's a safe place temporarily until we can figure out how to work with parents to get them home," says Bridget Cannon, the director of youth services for Volunteers of America, which runs Crosswalk. "But there's nothing keeping them here. They could walk out the front door if they wanted."

In Spokane County, a group of local stakeholders — police, lawyers, city government officials and DSHS representatives — have been meeting since last spring to come up with a better solution. Cannon doesn't like to lay the blame completely on DSHS. She says there aren't even enough foster homes for 4-year-olds, so "what are they going to do with a 14-year-old?"

Carter, the public defender, who constantly comes into contact with situations where it seems obvious that DSHS should file for custody of a kid, isn't as quick to let the state off the hook.

"State law gives DSHS authority to care for these kids, but there's a built-in conflict of interest," he says. "Even though they have a statutory obligation to provide these services, they cost money."

In an emailed response, Norah West, a DSHS spokeswoman, says the state "does not benefit financially by bringing a child into its care," and that it's restricted in what it can do by law.

"We make determinations about placement and the provision of resources based on the safety and best interests of children and their families within the framework of the law and its related policies," she writes.

Kim Justice was recently appointed director of the Office of Homeless Youth Prevention and Protection Programs, created by the bill Inslee signed last April. She says the issues raised in Columbia Legal Services' report are exactly what her office will tackle. "It starts with us," Justice says. "There is the specific task of this office to make sure no public system is discharging youth into homelessness."

Justice also bemoans the lack of comprehensive statistics. Annual point-in-time counts are the best available data on youth homelessness, but their use "vastly undermines" the problem, she says. Spokane's count, conducted in January 2015, found that 24 percent of the 1,033 homeless people were juveniles.

For Lewis, who's been involved with juvenile justice since 1979, only time will tell if the new law is effective.

"If you want to address the problem, you have to earmark money for a specific purpose," he says. "This is a specific population of kids getting released into homelessness, with no one to intervene effectively on a statewide basis. Therein lies the need. We either live with it as a society and say 'Too bad,' or we do something to address it." ♦