Nearly half of the kids in Spokane County who have had contact with the juvenile justice system have also run into the state child welfare system, according to a report released last month by the Washington State Center for Court Research.

“Being involved with Child Protective Services, for example, is an indicator of risk for the child and the family,” says Carl McCurley, manager of the WSCCR. “The more risks the kid has, and in particular family-related risks, the less likely they will have prosocial behavior, and they’re more likely to contact law enforcement.”

Using data from 2010, the researchers also found that the percentage of kids with a foot in both systems varies widely from county to county, from a low of 17.5 percent of multi-system youth in Adams County to a high of 60.4 percent in Skamania. In Spokane, 47.5 percent of youth who touch the juvenile justice system have a past experience with the child welfare system.

The reasons for the county-to-county discrepancy are not immediately clear, the report states. Some possible explanations include:

• Local policies can impact the likelihood a court files a truancy or at-risk youth petition.

• Variation in prevention and intervention programs can impact the probability of kids entering one or both systems. 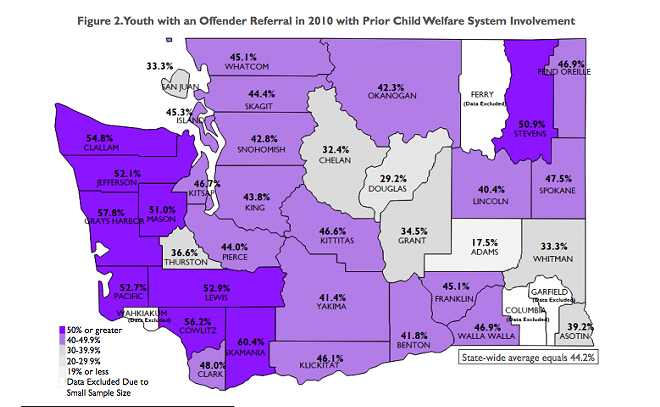 Courtesy of the Washington State Center for Court Research
Dave Carter, a veteran public defender who handles juvenile cases, says that in his experience it’s important to note that this research only includes kids whose referrals to the welfare system were accepted.

“In Spokane County, we have hundreds of youth who are referred to CPS annually, but their referrals are not accepted,” Carter writes in an email. “I see teenage children weekly that have been, or are currently being exposed to serious abuse and neglect, yet because referrals made on these children are not accepted by CPS, they are denied the opportunity to receive prevention and intervention services.”

Indeed, for most of 2015, Children’s Administration within the Department of Social and Health Services received 93,283 intake requests. 53,602 did not meet the threshold of abuse or neglect required for state services.

“We want to draw actors’ attention,” McCurley says. “And take advantage of an opportunity to change the system: less burdensome intake, record sharing between Child Protective Services and court. That may get them to a happier place sooner.”

Just days left to vote for the 2016 Best of the Inland Northwest!