The Washington State Center for Court Research recently released a report that indicates the state's school truancy laws are not working as originally intended.

In 1995, Washington state passed the "Becca Laws" aimed at giving families and schools more control over kids who missed too much class. One aspect of the laws set up requirements for schools to notify parents whenever their kids missed school. The idea was for parents and schools to work together before getting the juvenile court

The laws were named for Becca Hedman, a Tacoma girl who ran away from her family at age 12. She worked as a prostitute to support her addiction, and her body was later found along the Spokane River after she'd been bludgeoned to death.

Critics have said these laws might be the reason Washington state locks up more kids for noncriminal offenses — skipping school, breaking curfew, running away from home — than any other state in the nation. In 2011, Washington judges sent kids to juvenile detention for noncriminal offenses 2,705 times, twice as often as the next highest state figure, the Olympian reports.

"The truancy petition process represents the letter of Washington's truancy laws, but ignores their spirit and intent," the Center for Court Research report reads. "The intent of the Becca Laws is to unite schools, courts, communities and families in an effort to provide the services needed to help students to overcome their own personal barriers to school attendance."

However, Spokane might be an exception to the rest of the state. The report specifically calls out the area's juvenile courts for having "remarkably well-defined models for successful community truancy boards, and evaluations have shown positive outcomes for students."

Dave Carter, a public defender in Spokane County for nearly 30 years, handles a lot of school truancy cases. He says the programs Spokane has in place are the best chance kids have to break a cycle of generational poverty.

Most of the truancy cases Carter encounters are for kids who come from low-income families, are homeless or have parents addicted to drugs or alcohol — an environment where attaining an education is not valued. It's the constant nudge from the juvenile court that keeps them in school and in a lot of cases leads to a diploma or GED.

"This is a really valuable program," Carter says. "Otherwise, these kids from these background don't have much of a chance."

As far as improvements to the local program? Carter says the juvenile court is assigning two full-time people to monitor truant kids in school. The idea is to identify the reasons why the kids are missing school without going to court.

"The goal is to keep these kids from having to come to court," he says. "But then when they do come to court, we'll have the information to figure out what can be done to help them be successful in school."

Below are a few key findings from the report, which used statewide data: 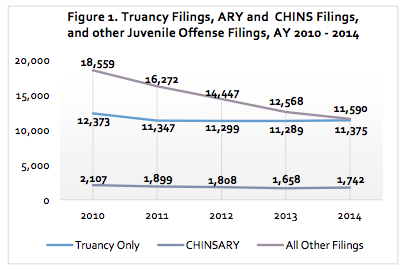 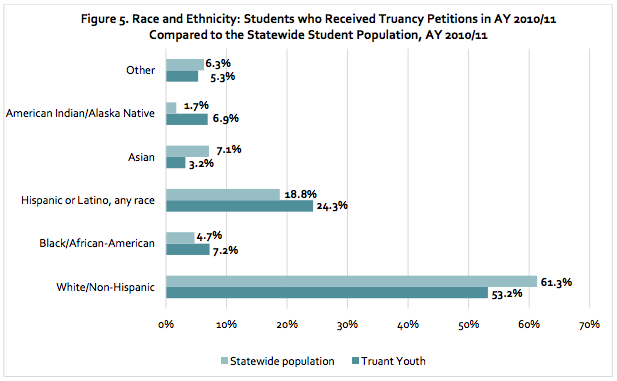