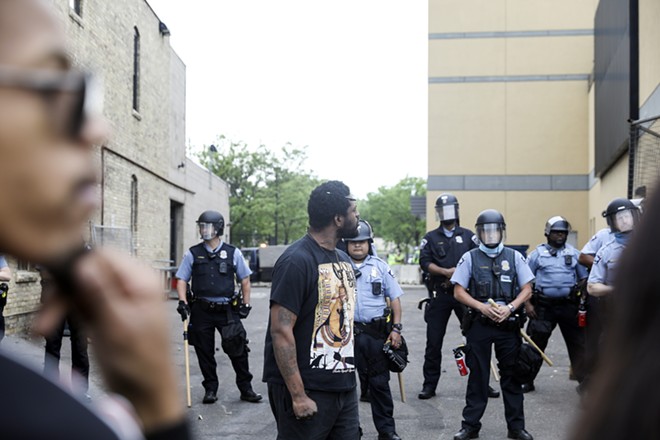 Protests erupted across South Minneapolis on Wednesday into early Thursday morning after Floyd, who was black, died in police custody Monday. He repeatedly said, “I can’t breathe,” while being detained by a white police officer, who was fired after the encounter.

The governor said that he supported peaceful demonstrations but that the destruction Wednesday night warranted further action to keep the peace. During the protests, police fired tear gas and rubber bullets as people set buildings on fire and looted stores.

“Unfortunately, some individuals have engaged in unlawful and dangerous activity, including arson, rioting, looting, and damaging public and private property,” Walz wrote in his proclamation. “These activities threaten the safety of lawful demonstrators and other Minnesotans.”

After a night of demonstrations, ash fell Thursday morning at a shopping center on Lake Street, where a recently renovated Target had been defaced and looted. A nearly completed apartment development across the street had been burned to its concrete lower floor. Other commercial structures were also badly damaged.

At a news conference Thursday afternoon, Mayor Jacob Frey said the destructive protests were a reflection of the black community’s anger over 400 years of inequality.

“What we’ve seen over the last two days and the emotion-ridden conflict over the last night is the result of so much built up anger and sadness,” Frey said. He declared an “all-out effort to restore peace and security” in the city.

“They executed my brother in broad daylight,” Philonise Floyd told CNN on Thursday, breaking down in tears. “I am just tired of seeing black people dying.”

Four officers involved in the arrest were fired from the Minneapolis Police Department, and the FBI joined the investigation into the death of Floyd, a resident of St. Louis Park, Minnesota.

The Justice Department said in a statement Thursday that it had made a federal investigation into Floyd’s death a “top priority” and has assigned experienced prosecutors and investigators to the case.