Inside Out sells silliness to kids while delivering a powerful story for parents. 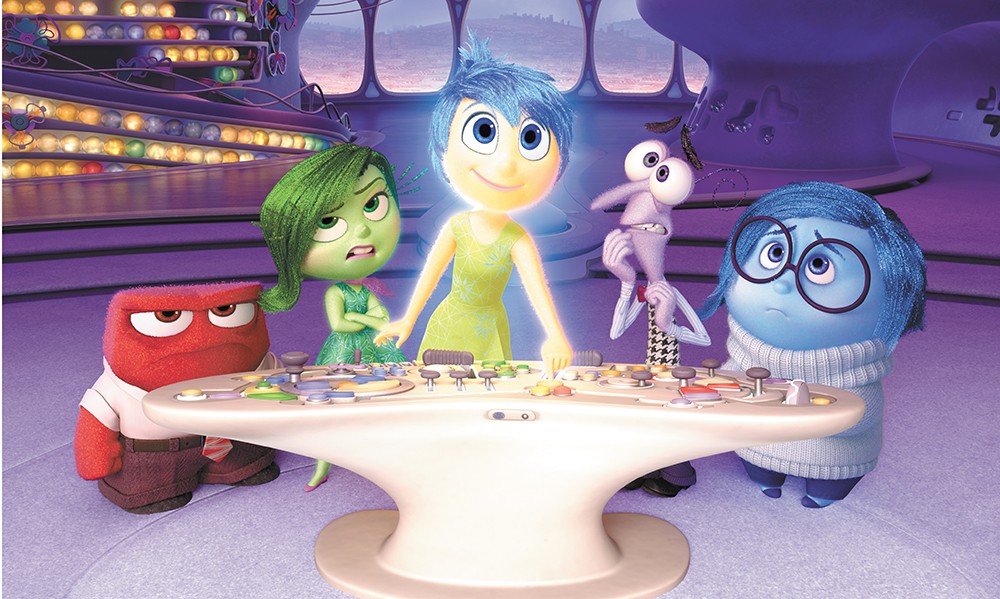 Emotions come to life in Inside Out.

If there's anything we should realize by now

about the way Disney markets its animated films — whether from Disney Animation Studios or Pixar — it's that there's simply no way to know from the advertising what these films are actually about.

Brave's advertising played up the comic relief from the mischievous triplets, completely hiding the fact that the central story was about a complex mother-daughter relationship. Frozen's marketing campaign emphasized Olaf the snowman and the playful reindeer, again hiding the centrality of the female protagonists. And Big Hero 6 kept the focus on gentle robot Baymax, burying the grief and anger of main character Hiro. There's what a movie is, and there's what a movie sells, and if you don't realize that Disney is remarkably — perhaps even cynically — savvy about such matters, you're gonna be in for some big surprises.

That preface is crucial for any adult considering seeing Disney/Pixar's Inside Out, and basing that decision on what they see in commercials. While the brightly colored central characters and high-concept premise might suggest a simplistic, gag-filled story, you have no idea of the emotional complexity director Pete Docter has packed into this terrific adventure.

That high concept is indeed easy to distill: Inside us all is an emotional "control room," with physical manifestations of those emotions responding to the things that push our metaphorical buttons by pushing literal buttons. For an 11-year-old girl named Riley (Kaitlyn Dias) whose parents (Kyle MacLachlan and Diane Lane) have just moved from Minnesota to San Francisco, those emotions take the form of Joy (Amy Poehler), Sadness (Phyllis Smith), Fear (Bill Hader), Disgust (Mindy Kaling) and Anger (Lewis Black). As Riley struggles with adjusting to her new home and new surroundings, Joy and Sadness inadvertently wind up whisked away to the far reaches of Riley's subconscious, trying to preserve the happiness of Riley's "core memories" and make their way back to headquarters.

The fanciful scenario — while something that's been an idea in everything from Woody Allen's Everything You Always Wanted to Know About Sex* (*But Were Afraid to Ask) to Herman's Head — allows Docter and company to craft a fantastically detailed world inside Riley's brain. Memories are stored in the form of brightly colored balls that race along shiny tracks, with cleanup crews amusingly doing the work of weeding out stuff we all know we'll never remember. The core memories themselves are manifested as floating mini-cities, while imagination, nightmares and lost memories take on equally fascinating forms. It's an animator's dream to create an entire universe from scratch, and Inside Out does so with creativity that pops with its own perfect internal logic.

Yet as terrific a technical achievement as Inside Out might be, it's an even better piece of writing. Throughout his Pixar films — which also include Monsters, Inc. and Up — Docter has shown himself to be deeply connected to parental relationships, and the evolving emotional needs of children as they grow. Here, he's wrestling with something that on its surface would seem to be too much of a downer for an ostensibly "family" film: How do parents deal with the reality of their carefree child transitioning into the more complicated emotional life of an adolescent? With Joy serving as the parental surrogate in this case, Inside Out hits some of the same wrenching notes that Toy Story 3 did in touching on transitional moments when a mother or father has to let go of a child as they used to know them, in order to make way for the adult they'll eventually become.

There's plenty of fun to be found in the characters and voice performances — including Richard Kind as Riley's imaginary friend Bing Bong, a pink elephant — plus a bunch of hilarious postscript material that expands the "brain control room concept" to several other characters from the film. But whatever Inside Out offers to kids — and is promising in commercials aimed squarely at the grade-school crowd — is nothing compared to what the Pixar films continue to deliver for adults, in storytelling that nails some of the most defining, lump-in-the-throat moments of human experience. Those commercials might get the kids to nag parents into a visit to the theater, where those parents might be startled to discover a movie that's really all about them. ♦

Inside Out is not showing in any theaters in the area.