Daniel Walters photo
If you decide you want to do all your own roofing from now on after reading this week's Inlander investigation, there may be another way.

When the Inlander called 20/20 Exteriors owner Tim Nicholas for our exposé on roofing contractors ducking inspections, Nicholas' partner was on one of their customer's roofs, adding in more vents at the request of the city inspector.

It wasn't anything that 20/20 Exteriors did wrong, to be clear. It was a problem with the way the roof was built when it was first constructed. Without enough venting, moisture can build up during the winter. The inspector spotted something that, theoretically, could be a huge long-term issue.


"The worst-case scenario is you end up with black mold. It’s like hazmat-suit bad for you," Nicholas says. “That was a great example of that guy doing a fantastic job protecting the homeowners.”


Of many roofing companies in Spokane, 20/20 Exteriors had the best record of following up on inspection that we could find: Only 1.1 percent of Nicholas's permits with the City of Spokane have expired without an inspection, and he says all of those are related to times when a customer canceled a job, not when inspections were avoided. (Compare that to Perrenoud Roofing, which has a ratio of expired permits 78 times higher.)

Nicholas estimates that inspectors want him to tweak something on the roof about once in every twenty projects.

"The hard part is the time and the energy it takes to set those inspections up, to make sure they're followed up on," Nicholas says, "It's a lot of work. I can tell you right now. It’s a decent part of the work week... The price of doing it correctly is steep, but it’s something we choose to do."

To be clear, an inspection by the city or county isn't a guarantee that your roof is well-constructed, nor is a lack of inspection a guarantee that the contractor did a shoddy job. There are only a limited number of issues that an inspector looks for, and some inspectors have a reputation of being, let's say, less rigorous than others.


Think of the city or county roof inspector like a spell checker. A spell-checker won't necessarily tell you whether you're a great writer. There are a lot of problems a spell checker could miss. But even the savviest writer will occasionally make the sort of mistakes that a spell checker can catch.


If you don't have a properly installed "drip edge," for example, water could end up dribbling under the roof. Without enough of an "ice shield," ice dams can build up during Spokane's infamous winter freeze-thaw cycles, directing water under your shingles or taking off chunks of your roof when they finally break off. Without the right "flashing" around chimneys and vents, you could find your roof leaking years later.

And without your roofing permit finalized by inspections, it could complicate the selling of your house — banks may not want to take the risk of lending to a buyer to purchase it.

Kenneth Brine, president of the NW Insurance Council, also says that a lack of inspection could also come back to bite you in rare cases if you're trying to make an insurance claim and there's a dispute over whether the roof was properly repaired or not.


"If the homeowner had an inspection to lean on, to say, 'I had this roof repaired by a quality, reputable company and I had it inspected by the city and everything was signed off on, so this damage is clearly not because the roof wasn't properly repaired,' they would have that leg to stand on if there was a dispute," Brine says. "If they didn't have an inspection completed, the insurer might more easily be able to lean on that lack of an inspection to say, 'I think it's in dispute whether or not your roof was properly repaired or not.'"

For the contractor, Nicholas says, there's the benefit of ensuring a good relationship with your customers.


"At the end of the day, if I see the client at the grocery store, I don’t have to duck behind the produce section hoping they don’t see me," he says.


Since publishing our story,  the Inlander has been deluged with emails from people sharing concerns about their own contractors or their own roofs. Instead of running down each case individually, we thought we'd write a brief guide to how to do your own search, and then what to do about it.

Daniel Walters data visualization
The City of Spokane's data is not comprehensive, but it provides a good sense of the vast difference between different roofing companies. At times, permits can also expire after a project is canceled. This graph has been corrected to exclude Barton's non-roofing permits from the figures.


The City of Spokane: Go to aca.spokanepermits.org. Click the "Building" tab to bring you to the record search page.

Let's say that you lived in the Inlander building. Where it says "Street No." type "1227" (in the "From" or "To," field, it doesn't matter) select "W" in the "Direction" drop-down menu and type "Summit" in the "Street Name" field. Usually it's best to leave the "street," "parkway" or "road" suffix out: the system is finicky about which abbreviation you can use.

Ta-da! You'll see a list of all the permits filed for your property — theoretically since 1993, though the record-keeping is spotty for the early years. If you see an "expired" under "status" next to any of the permits, click on the red bolded "record number."

That will bring you to a more detailed view. If you click on "record info" you can pull down a menu where you can find information on any inspections that have been conducted. You can even see if the inspector has left any comments for alterations your contractor needs to make. Remember, inspection requirements vary depending on your project. For a roofing inspection, the contractor has to schedule two inspections before the roof can be considered complete.

Unincorporated Spokane County or Spokane Valley: Go to the County's permit portal (or here for Spokane Valley.) Both work the same way. If you live on East 123 Fake St, type in
"123 E Fake" to the field and hit enter. You should see your permits come up.

If you don't see a specific permit, that's could be because your contractor never got a permit, never got your property inspected or the county's permitting system is getting glitchy again. Records from a decade or more ago are spotty.

(Here are links to Cheney and Liberty Lake's permit searches as well.)

For manufactured homes: Mobile home permits are governed by Washington State Department of Labor & Industries instead of individual cities or counties, and so there's a whole different system to deal with. Their permit search page is here, but be careful: The data is full of holes. A significant proportion of permits that have been completed don't specify that they have a final inspection. 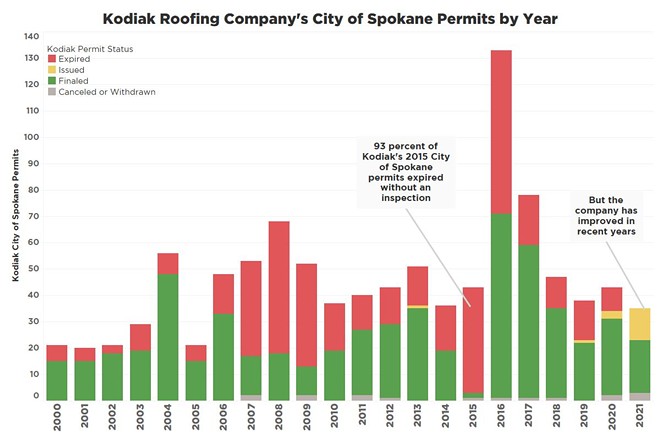 
One option is to call your contractor and ask them what happened. Mistakes do occur, and because word of mouth is so important, many contractors will want a chance to correct them.

When I interviewed Nathan Perrenoud, head of Perrenoud Roofing, he repeatedly promised that he would make sure an inspection gets completed for anyone who specifically requests one, even if that means lifting up shingles and paying the City of Spokane the $75 reinspection fee for them to come out and complete it.


If you're in the county, Moore says, feel free to reach out and ask for the inspection that never got completed.

"The easiest way is to email bphelp@spokanecounty.org [and say] 'I recently noticed that I may have an expired permit from an article. Can you check on it?'," Moore says.

In the case of an expired roofing permit, Moore says that his team will perform an inspection for you, free of charge, even if the permit has expired. He says he's not looking to punish the homeowner or the contractor.

"My biggest concern is getting out there and making sure we get it closed out," Moore says.

The City of Spokane has been a little less clear on how they plan to respond to the uninspected properties, stressing that it's the responsibility of the contractor to make sure the inspections get done.

If you suspect that an inspection might not have been completed, city spokeswoman Kirstin Davis writes in a text message, property owners "should call their contractor for verification or City Development Services Center at 509.625.6300 and ask for the inspector that is listed on the permit."

It's crazy-hard to find a decent, available contractor — but word of mouth is still your best bet

OTHER WAYS TO CHECK OUT A CONTRACTOR


The Better Business Bureau is not necessarily a reliable source, unfortunately. Online reviews of businesses can raise red flags, but also aren't guarantees.

One useful tool is L&I's "Verify" page. Search the name in quotes to make finding the contractor a little faster. You can find the outcome of labor safety inspections — if a business is reckless with their employee safety, how meticulous are they willing to be with your roof? — and also a slew of other possible violations, including whether they were caught doing work on manufactured homes without a permit.


And then there's the journalist's old friend, the Washington Courts case search. Remember to search by business name and personal name, and look under both civil and criminal cases. You'll have to drive down to the court house and stop by the clerk's office if you want to read the details.