Spokane political party leaders hope to harness post-election passion into civil discourse. But so far, there's only been more strife 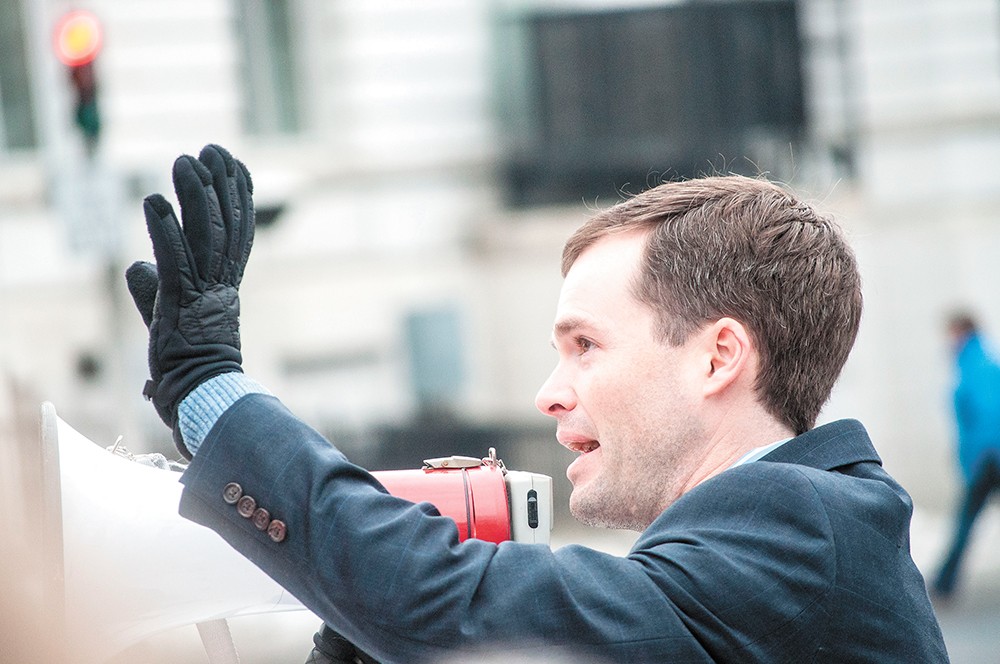 Daniel Walters
Andrew Biviano took over this year as chair of the local Democratic Party.

Two weeks before a group of people simultaneously flipped her off as she blasted the Spokane City Council for barring a hypothetical religious registry,

Spokane County GOP chairwoman Stephanie Cates was hopeful about the level of discourse in Spokane politics.

In mid-January, as Donald Trump prepared for his inauguration and protesters prepared for the Women's March, Cates congratulated her local counterpart, newly elected Spokane County Democratic chairman Andrew Biviano, on Facebook. Cates and Biviano had only met each other once before, at a debate in October, when Cates was vice chair of the Spokane County GOP and Biviano was in the midst of a campaign for Spokane County Commissioner that he would lose.

With both being elected to lead their respective county parties this year, Cates envisioned a "new era of civil discourse" between Republicans and Democrats locally. Biviano then thanked her for the congratulatory post.

Since then, sparked by protests, politically charged vandalism, and controversial booing at a Martin Luther King Jr. Day rally, Cates and Biviano have been sparring with each other through the news and social media. Cates has called on Biviano to denounce rude behavior against Republicans, while Biviano says Cates is attempting to distract attention from the real issues facing vulnerable people. Conversely, Biviano questioned why Cates would speak out against a city council ordinance preventing city employees from participating in a religious registry, and Cates has blamed Democrats for creating a hostile environment that led to obscene gestures directed at her and other Republicans at city hall.

The back-and-forth is representative of how, during a time of political turmoil, local party leaders are trying to harness people's passion and turn it into something constructive. 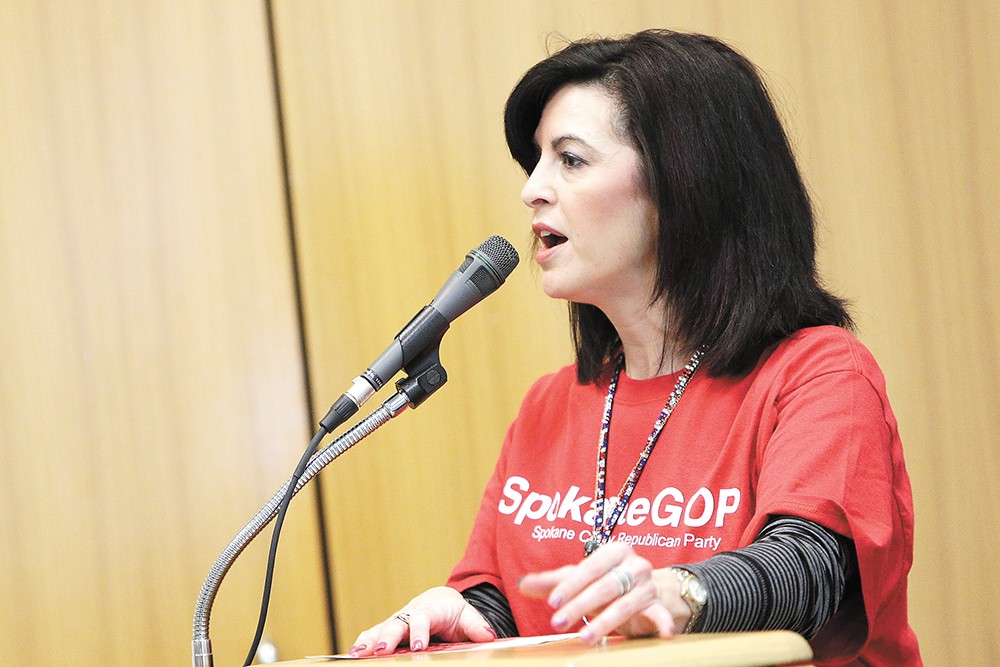 As Democrats across the country plan how to resist Trump, Biviano prefers a different guiding word: Protection.

For many people, that means stopping lawmakers from repealing the Affordable Care Act without providing an alternative for those who would lose their health care. And that makes high-ranking House Rep. Cathy McMorris Rodgers a political target for those who fear Republicans will do just that.

McMorris Rodgers was booed during her speech at a Martin Luther King Jr. Day event in Spokane. Eventually, some began chanting "Save our health care!" Afterward, Cates issued a statement calling for Biviano to denounce what she called "bullying and hateful discourse."

"That wasn't the time or the place," Cates tells the Inlander. "I just felt that doesn't help anyone's cause when they resort to those tactics."

But Biviano did not denounce the boos or the chants. Instead, he defended the Affordable Care Act. He says that talking about the decorum of people at a rally is distracting from the real issue.

"I don't know why they were yelling. Maybe a person was yelling because they're worried about their kid dying," Biviano says. "I would be yelling too. I would be yelling at the top of my lungs if I was worried for my life. So let's focus on what matters."

Biviano wants to focus more on advancing Democratic values in Spokane County, not necessarily only winning local elections. The silver lining of Trump's election, he says, is that Democrats are now more involved.

"It's much easier to build a movement when you're in the minority than the majority," Biviano says.

Weeks after McMorris Rodgers was booed on stage, Biviano thought that citizens had found a more productive way to get their message heard. They went to the congresswoman's office to make her staff aware of their concerns, but Biviano says he was disheartened to see that only one or two people were allowed in at a time, forcing everyone else to stand outside, when he says there was more room inside. Here, Biviano says, they were doing what people say they want by peacefully assembling and protesting, but McMorris Rodgers' office presumed they were some kind of "angry mob."

Cates calls things like gathering the masses together to go down to city council, or to the congresswoman's office, a "political stunt."

"That almost overwhelms the system a little bit, and I don't think that's effective, because I think it's better to just speak one-on-one maybe, and not create a stunt," Cates says.

"I find it remarkable when Republicans are spending most of their time and energy criticizing Democrats for how they're expressing themselves," Biviano says. "But they're not giving any options for Democrats to express themselves that they approve of."

Being chairman of the Spokane County Republican Party in the past four years was a lot like herding cats, says former chairman Dave Moore. With so many different factions within the party — Tea Partiers, Libertarians, grassroots Republicans, to name three — it can be difficult to bring everyone together.

But the party is more united now, Moore says. Cates agrees. She says she wants to help grow the party even more locally, and she plans to do that by inclusion, not exclusion.

Spokane County GOP vice chairman Isaiah Paine says they can take cues from the election, in which he argues the two biggest movements were with Trump and Vermont Sen. Bernie Sanders, both "anti-status quo" movements. More and more, he says, people are seeing through political stunts and grandstanding.

"There are real problems for real people and real pain, and we want to help solve those, and we think we have policies and principles — core Republican, conservative principles — that will help people," Paine says.

But lately, the Spokane County GOP has been focused on what Cates describes as an "atmosphere of intimidation" against local Republicans. It's not just McMorris Rodgers getting booed, or protesters showing up to her office. Cates is more troubled by the vandalism to the GOP office that had graffiti that said "Refugees Welcome" and "Nazi Scum." She has questioned whether that kind of vandalism, motivated by political affiliation, should be added to the state's "hate crime" statute.

"It's chilling to think that if you're speaking up for your political views, if you're quoted in the paper or just wearing a hat that indicates which candidate you support, that you could be threatened or your property could be vandalized," Cates says.

And the day after the vandalism, Spokane City Council unanimously passed an ordinance to prevent a religious registry. Cates, who went to the meeting and called the ordinance "fake council business," says it was more of a rally than a council meeting.

"What I experienced at the city council meeting was really not civil discourse," Cates says. "It was an environment that was hostile. There were obscene gestures made when I spoke, there was intimidation, aggressive intimidation. That's not helpful to the discussion."

Cates says that city councilmembers, including council president Ben Stuckart, were playing on people's fears with the ordinance. She says it created hysteria about a policy that has not been proposed.

"My job as the chair of the Republican Party was to help people understand why Republican values, Republican policies, have a positive impact on their lives. And we do value religious freedom. The idea of a religious registry would be unconstitutional, and it's not what our country was founded on," Cates says.

Paine says that Republicans would like to see a repudiation from Stuckart or Biviano regarding the tactics used in the audience during the council meeting.

Stuckart, for the record, tells the Inlander he did not see anyone make any obscene gestures because he was too focused on the speakers, but it would have been against council rules. He points out that he lectured the audience about being polite before the meeting started. He also wonders why Cates wasn't bringing up intimidation at council meetings any other time, like when Rep. Matt Shea, R-Spokane Valley, and a crowd of armed individuals protested the council's recognition of an Islamic civil rights group in 2015.

Biviano, meanwhile, questions Cates' rationale for speaking out against the ordinance if she claims that she wouldn't support a religious registry in the first place. He says he would have hoped that would have been something both sides could agree on.

"It's the kind of thing that only Republicans can do right now," Biviano says. "I can't reassure anybody about what the president's going to do, because Democrats have no ability to stop him." ♦