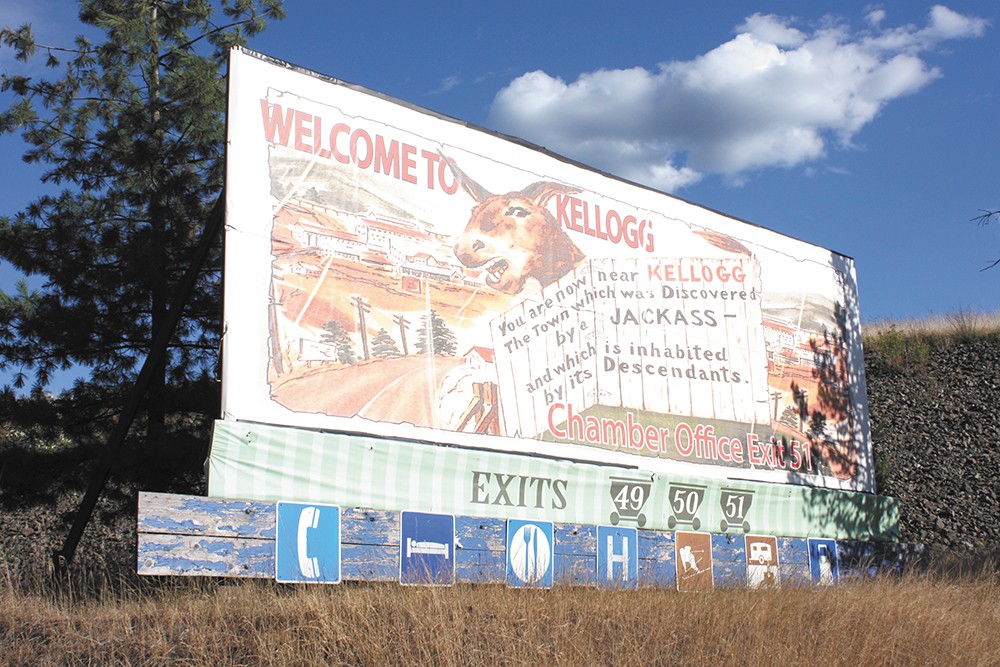 Laura Johnson
The town motto: "Founded by a jackass and inhabited by his descendants."

It was Noah Kellogg's donkey

that alerted the prospector to a mountain outcropping of galena, a lead ore often containing silver. This miraculous moment would attract a rough-and-tumble-type crowd to dig up and refine the resources below. What this visually stunning Silver Valley town is today — through mining ups and downs, population decline and industry changes — is just as the town motto cheekily states: "Founded by a jackass and inhabited by his descendants."

The kid can't handle it

. He's on the moving chair for mere seconds before charging down the platform as fast as his preschool-aged legs will carry him. Running away from this ski lift, away from his already seated father and slightly older brother. The Silver Mountain Resort chairlift must continue its trip to the bottom of the dusty run without him.

"I'll keep an eye on him," lift operator John Jupin calls out, reassuring the left-behind riders.

In the summers, the resort, renamed in 1990, makes way for dirt-bike enthusiasts and tourists intrigued by taking one of the world's longest single-cabin gondola rides to the top of Kellogg Peak.

Last winter, the resort limped through the lackluster season, snow machines making what Mother Nature could not.

Today, Jupin is running Chair 3 as a scenic excursion for those handfuls of people here to enjoy the breezy mountain air. The 24-year-old says he works nearly every day without respite so that when winter finally comes, he can justify his many snowboarding runs among the pine trees.

When he first arrived in Kellogg five years ago from South Carolina, he didn't know how to snowboard or ski at all, but he kept that quiet, fearing he'd lose the job he'd somehow nabbed. His boss soon forced him onto a board. Now, Jupin says he lives to snowboard.

Jupin slows the chairs down slightly as the father and child come into view. They run off the lift down to the patch of grass where the youngest has taken refuge. The dad kneels down in front of his boy and wraps his arms around him.

Tomorrow is her birthday

. So tonight at the moderately busy Longshot Saloon, one of Kellogg's oldest buildings, June "Shawnee" Christmann is eating an entire plate of red enchiladas in preparation for a day of drinking ahead.

"They tell me I'm too skinny," says Christmann, who, at nearly 63, confesses she barely clears the 100-pound mark.

This is Christmann's bar. She doesn't own the joint. She's just been a loyal patron and dart player for 40 years. She says that more people in town need to care about its history, as her husband did.

"Bruce used to drive us around and show us what places used to be," says Christmann of her miner husband, who passed away from cancer in 1996. When he died, she says his co-workers, the men who were gruff because they had to be, cried. They took care of her and her three kids.

"Hey Justin, did you know this place used to be a whorehouse?" she asks the young-looking barman. He nods in recognition.

"I'm damn proud of my town," Christmann says. "I love to come down here to the people I love."

rent DVDs," says Box Office Entertainment owner Eric Howell. Especially in Kellogg during the "eight months of winter" or if the heat is too oppressive, as it has been in recent weeks. It's $3 for one-day new movies, $1 for three-day rentals.

"I tried staying away from the Internet as long as I could and stay with the way things were before," he says, showing off a new tablet. "I suppose that's what I'm still doing with this store."

line the rose-wallpapered walls, depicting dirty young men whose beards, suspenders and wide-brim hats wouldn't look out of place in a craft cocktail bar. Today, volunteer Colleen Braun is holding down the fort at the Shoshone County Mining & Smelting Museum, aka the Staff House Museum, home to historical photos, gemstones and a need to preserve mining artifacts.

The last Kellogg mine closed in 2001, but there are rumblings that Bunker Hill Mine, closed in the 1980s, is opening once more. It's a work in progress.

"It would be great to start the mines again because the minerals are there," says Braun, whose late husband was a geologist for Bunker Hill. That's not to say feelings aren't conflicted.

She's lived in the same house for 45 years and says she's glad she never had to leave the area. But she remembers the dark air, gray river water and dead grass.

"It was just something you lived with," she recalls. "You had to be smart; you just didn't let your kids outside at certain times."

At his post for nearly 20 years, Mayor Mac Pooler says it's a lot more complicated than someone coming in and reopening the mine.

Once it was shut down and the government designated the polluted valley a Superfund site, the earth has had time to heal.

"It's a lot prettier and it's a better place to live, but is that that better than having all of those jobs? I can't exactly answer that," Pooler says. "But the way it was going before certainly wasn't the answer." ♦

On the map: 37 miles east of Coeur d'Alene

Annual event: Silverhoops 3-on-3 Basketball Tournament, July 25-26 (in 2015). Just completing its 22nd season, the event hosted 121 teams this year, its largest ever participation.

Notable name: Noah Kellogg, prospector who founded the town in 1885