Who would you like to see at next year's Tinnabulation music festival? 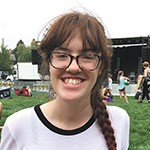 Umm, I don't know. I would definitely want to see Hayley Kiyoko. I don't know if she does music festivals. But seeing American Authors would be fun to come back to again. I tend to like to just wander around music festivals and listen to new artists, too.

Did you go to Bumbershoot in Seattle?

Well, I used to go to Bumbershoot, but it got too expensive.

In the future? Mumford & Sons would be cool. Noah Gundersen and Grizfolk, I like too.

I like Frenship a lot. They just played yesterday, but if Blitzen Trapper could come next year, that'd be great.

My mind is racing. Umm, Plini; he's a guitarist and composer from Australia.

Lost Hollow out of Nashville. Kind of Americana, pseudo-country. The drummer played with Reba McEntire for years. So he's just kind of put together his own band, and his wife sings. Great music.