Organisynth explores the potential of science fiction through music and collaboration 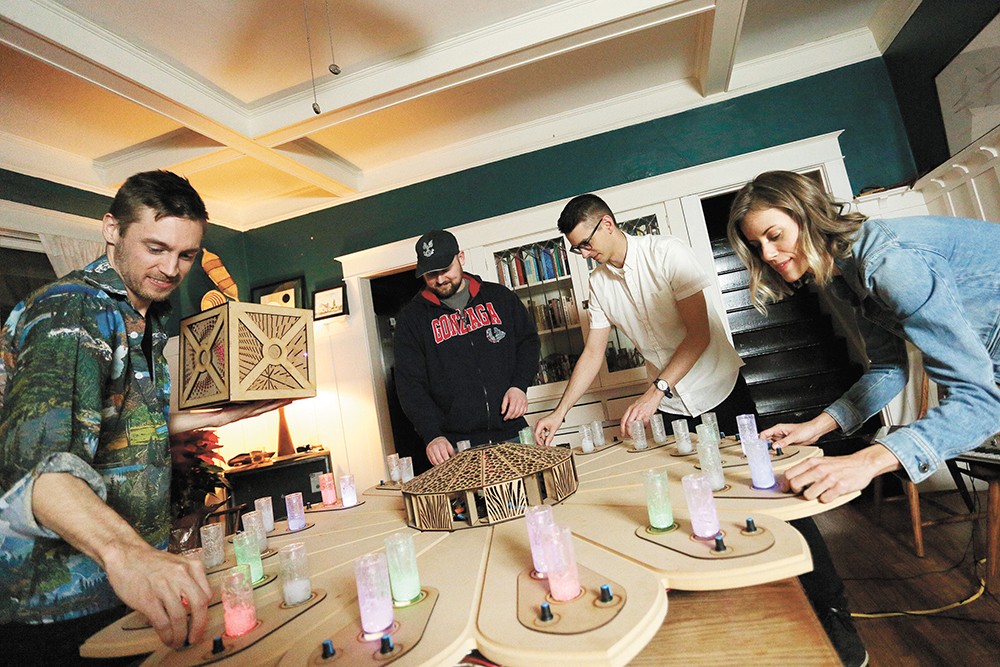 In the 1970s, NASA commissioned artwork of advanced space colonies that could house and support as many as 10,000 people. What emerged were renderings of massive tubular structures with sprawling habitats, including rivers, mountains and towns.

Sure, it's science fiction, but it's based in reality: As we inch closer to the singularity — that moment where technology overcomes the limits of humanity — and as our planet's health declines with each passing day, the human experience is destined for dramatic change. It's only as dystopic or utopic as you want it to be.

When Alex Mann saw the NASA concept art, he wondered: "What kind of society emerges from that technological and environmental condition?"

He and two other music-minded artists responded with Organisynth, an interactive audiovisual art installation in Spokane that combines the spark of human creativity with the inevitability of technology.

More plainly, Organisynth is an electronic music sequencer that people can play together. Think of the electronic memory game Simon with its blinking lights and tones, but blown up to fit an entire room. Its central figure resembles a flower, each petal containing two knobs that users can interact with. Users can walk directly up to the central "flower table" and begin twisting knobs to produce different sound effects. Everything is sequenced in the same key, so there's no way to screw anything up.

The project's creators say the goal was to build something that multiple people without musical experience could use to create harmonies and, ultimately, just have fun. Organisynth is about creativity and collaboration, they say, and music, especially electronic music, is fundamental.

"There comes an intrinsic sense of happiness and joy from being able to play a musical instrument in a setting with your friends," says Anne-Claire Mitchell, who took a curatorial role with Organisynth. "It's not about the product being made — it's the interaction."

Organisynth began through an artist residency last year at Laboratory Spokane, which specializes in interactive digital media. It was unveiled last fall and has since appeared at art and music events around the city, such as the Dark Wave Disco, an electronic music show at the Washington Cracker Co. Building in November that celebrated "all things synthesizer." (It's not currently on permanent display, but you can look for updates on Instagram @organisynth.)

The idea began with a house party. Or rather, a theoretical house party where, after a few hours, the host brings out a guitar and starts playing. It's fun, but unless you're holding an instrument and have some knowledge of how to use it, it's a mostly passive experience.

This is the antithesis of Organisynth.

"[Organisynth]'s intended to get you into making music very easily, as a communal experience, but in its music it's supposed to make creating music accessible," says Mann, the project designer. "It's nice that it sounds good, but it's more important that you're doing it together."

Organisynth was one of the more ambitious projects that Laboratory ever produced, says Mitchell, who also co-founded the Richmond Arts Collective. The team took the concept of a synthesizer and turned it into a room-sized installation, she says. One component controls the beat, one controls the melody, one controls the pitch, etc.

"They were using completely experimental technology, built from scratch, to a fully functional concept in three months," she says. "It was incredible."

Originally, Mann and Thomas Ruble, the project engineer, pitched a similar idea using smartphones. Essentially, users would be able to open a program on their phones that would allow them to communicate musically with each other.

"We did that and it just wasn't fun enough," Ruble says. "The problem is, you get someone on their phone and they are just too isolated."

They needed to go bigger.

Ruble says the actual construction of the project was "whipped together" on a deadline during some late nights spent soldering wires together underneath the flower table.

"It's hard to synchronize all of this stuff. I had to write some real sweaty code to get all these wireless things to work with each other," Ruble says. "We essentially wrote our own synthesizer software. It was a feat of software engineering."

Organisynth lights up like a spaceship, with its blinking lights and changing colors. Faces light up in blue, pink and green as visuals are projected onto the walls around them. It's built for the curious.

Much of Organisynth's inspiration comes directly from science fiction, a la Star Trek: The Next Generation, Ruble says. The television show about a diverse group of people exploring the galaxy, working together, accepting one another, solving problems with shared responsibilities all in the name of discovery and curiosity was such an idealistic vision of the future for him.

"There is a celebration of pluralism, and an add-on to that, the sense of infinite mystery," he says. "The sense that space is out there waiting for us, to witness — not even interfere with."

The idea of a space colony also isolates the human experience in ways that reflect technical necessity, but also social organization, Mitchell says. Modern vernacular increasingly relies on digital communication, whether it's a text message, fine art or video game, and music is no exception.

"The infinite potential with electronic music to experiment and to respond to and to reflect to the issues of our time is bound up in the conversation between a person and machine," she says. 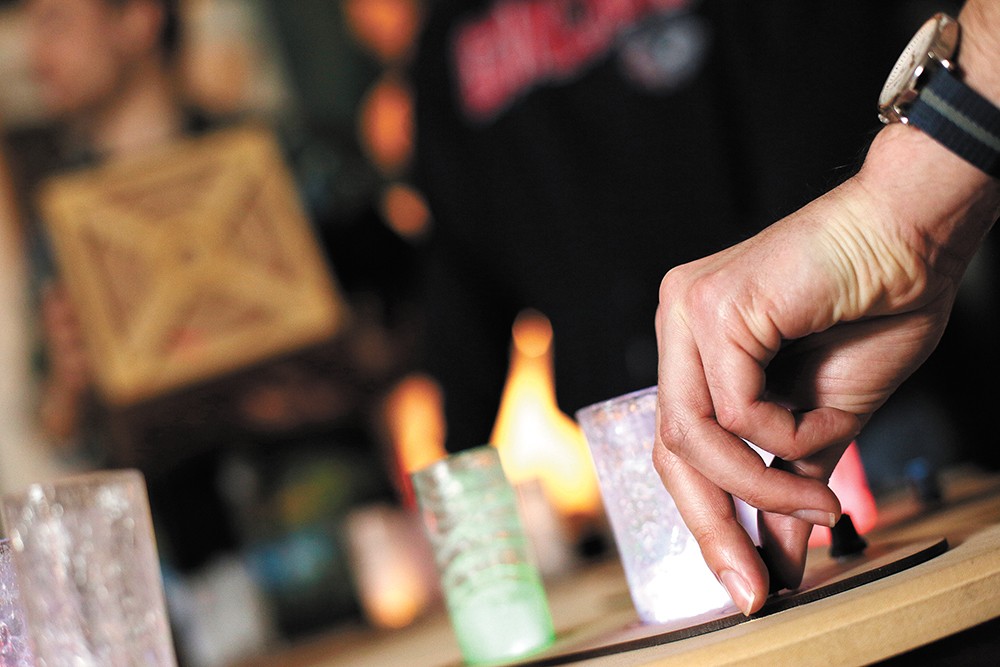 Young Kwak
Alex Mann turns on a knob on the machine's central unit, altering its sound.

Similar to Organisynth, the Spokane electronic music nonprofit Technological Taxidermy built their own interactive synth-based installation at Terrain last year. With the Sonic Touch Wall, users could manipulate sound by touching reactive paints on the wall.

Like the Organisynth team, Tech Tax is also trying to introduce more people to the world of electronic music, and to encourage people to "make weird stuff" on synthesizers.

"I just don't want people to be afraid of trying," says Chelsea Hendrickson, who works with her husband, Tobias Hendrickson, at Tech Tax. "I love the Organisynth concept of 'just come touch it and see what happens.' I want people to see it and try it. Maybe they're not going to be super excited about it or maybe their mind will be blown." ♦

The original print version of this article was headlined "Close Encounters"