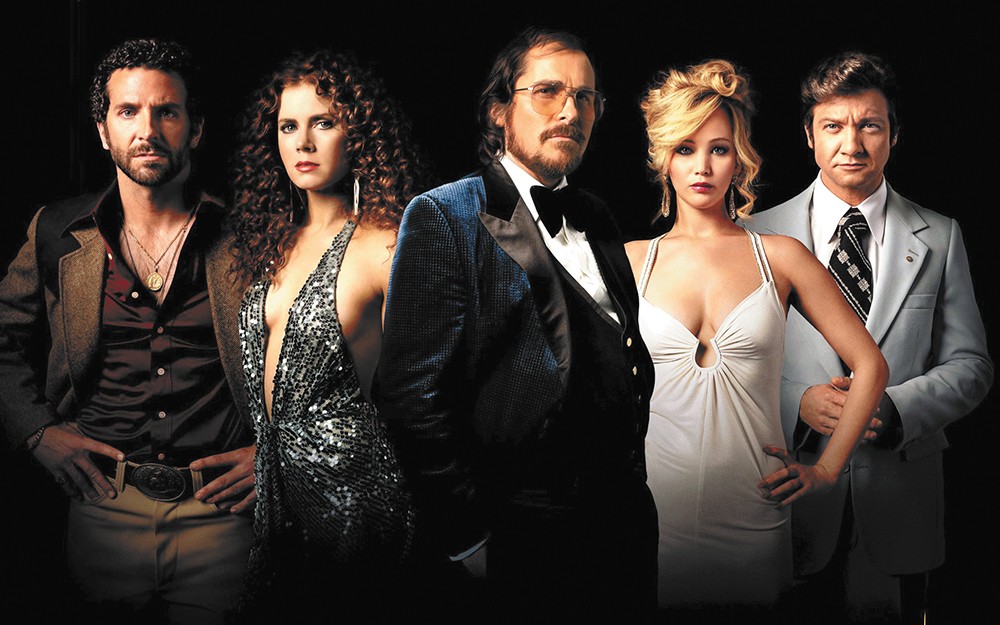 There are things that made me gasp and marvel at David O. Russell's audacity in American Hustle. He's tweaking Martin Scorsese, the master of a genre I don't know what to call. Crime drama, sure, but it's more specific: Epic ensemble historical crime dramedy. Narrower still: Epic ensemble historical crime dramedy bursting with insanely engaging characters who are impossibly real, impossibly ridiculous, whose stories you don't ever want to end. It was a genre of one before now: GoodFellas is a rare perfect movie, and it's one of my favorites.

Now there's American Hustle, also perfect, also instantly a favorite of mine. I can't wait to see it again.

Nobody here is particularly likable. Christian Bale and Amy Adams' con team are criminals who prey on desperate people and get off on it. Jennifer Lawrence is Bale's manipulative, passive-aggressive wife. Bradley Cooper is an FBI agent with more balls than brains (and he's got plenty of brains). But they're all utterly fascinating — like a 50-car pileup on the highway. The magnificent ensemble embody them and their absurd quirks — almost all revolving around scary 1970s fashion and hairstyles — with a gusto that's close to terrifying in the most deliciously entertaining way. Russell's script (with Eric Warren Singer) sets them upon one another, doing some very precise damage to abundant, exposed weaknesses and anxieties. The first such moment comes mere minutes into the film, something targeted so hilariously by one vain man at another vain man's insecurities, it ripped a snort of deranged laughter from me.

Hustle does that a lot. Everything here is perfectly modulated for humor, pathos and acrimony, all at once. Though it takes place in the late '70s — the fictional story is set among a real FBI operation from the era — the push-and-pull Russell sets up between the everyday scratching out of mere survival and the desire for life to be something grander and more exciting feels very much of the now. Irving Rosenfeld (Bale) and his "genius" — and she is — partner Sydney Prosser (Adams) just want to get by; they kept their cons small and under the radar. When they accidentally try to con the wrong guy in undercover agent Richie DiMaso (Cooper), he convinces them to work with him to pull off a series of stings in exchange for staying out of prison.

Hustle is full of awesome '70s rock, lapels wide enough to put someone's eye out and terrible perms. And it's about Irving's increasing dismay, as Richie's towering ambition, worthy of a game of Jenga, leads them into bigger plots designed to bring down ever-more-powerful men — from mayors to mob kingpins to D.C. politicians — with ever-increasing, multimillion-dollar amounts at stake. It gets intriguingly tricky when Jeremy Renner as Joe Pesci as Carmine Polito, mayor of Camden, N.J., gets caught in DiMaso's snare. Polito, who wants to rebuild Atlantic City as a jobs-creating, economy-boosting measure, just needs investors... which invariably will involve the mafia. But is Polito a bad guy? Does he deserve to be the target of an FBI sting? Irving isn't so sure.

"Some of this actually happened," we are informed as the film opens. Hustle's genius is that it leads us to a point where we realize it's happening all the time, in a grimy, spiritual sense. "We're all conning ourselves," Irving informs us in voice-over early in the film, while we're still scoffing at how ridiculous he is, and how we couldn't possibly be like him. But the multiple layers of self-delusion at play among all the characters, and the events that carry them along in spite of their best intentions otherwise? That's something we can all see in ourselves, if we're honest. ♦

American Hustle is not showing in any theaters in the area.