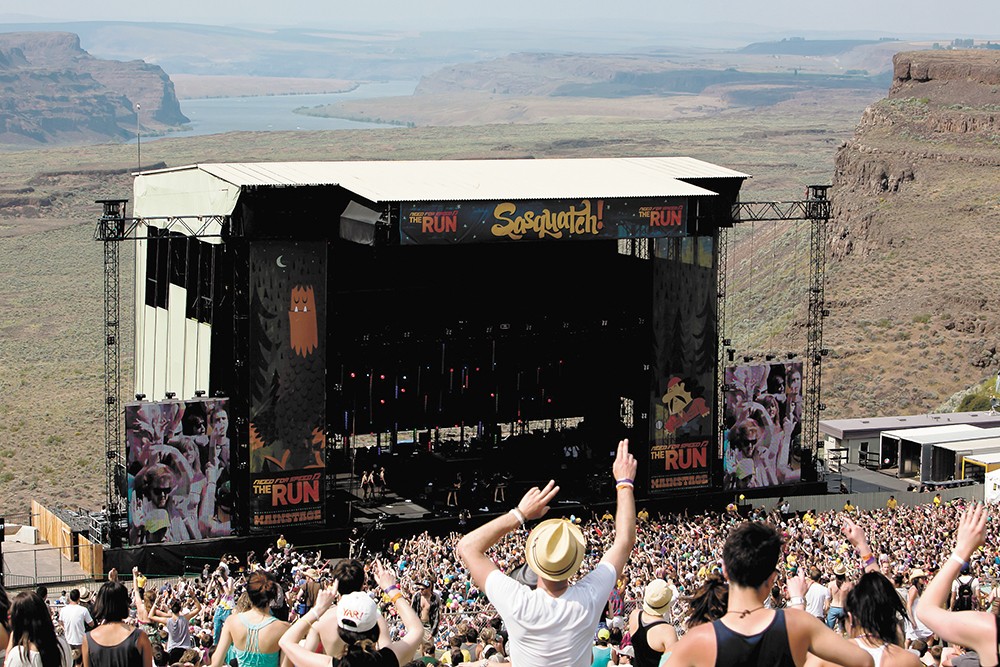 The Sasquatch! main stage sits right in front of one of the best views in Washington.

The Sasquatch! Music Festival is technically made for everyone,

but not everyone is made for Sasquatch! Before purchasing a ($350, not sold out yet) ticket, you must know thyself. Over the long weekend you will inevitably get dirty, have a hangover, poop in a Honey Bucket, get offered acid, experience a sunburn and yearn for your own bed.

If that sounds groovy to you, well, then Sasquatch! and all its hordes of bros, hippie wannabes and Canadians is exactly the festival for you. Here you will be rewarded for your troubles with some of the best views in all of Washington, as well as the most thrilling acts working in music today.

Now, we're all new the first time around, so we wanted to put together a helpful list of guidelines, many of which have been learned the hard way.

The glorious Gorge Amphitheatre, right outside of Quincy, Washington, is the kind of place that can experience multiple weather patterns within an hour. Daytime temperatures can reach as high as 100 degrees and nighttime can retreat into the low 50s. Sometimes it rains, then there's a fierce windstorm. You'll go to bed shivering in your sweatpants and wake up from the oppressive sun (probably no later than 8 am, sorry) thinking you may die of heat stroke if you stay in your tent a minute longer. PRO TIP: The weather is serious business at the Gorge.

Don't be one of those festivalgoers who came to party, rather than experience the music. Instead, come with a solid plan to see a select number of acts each day, but always stay loose with your itinerary, as you never know what amazing band you may discover if you simply float around. PRO TIP: Remember it's OK for your group to split up; go see the bands you want.

Inside, they'll try to take your hard-earned money. Tallboys run about $12, hot meals as much as $15. Instead, pack your car with snacks and anything easily made using boiling water — hot dogs, oatmeal, couscous packages. Remember all the healthy and unhealthy snacks and pre-made pasta salad. For the final night of the festival, treat yourself to a hot dinner. It will be amazing. Another thing: alcohol is allowed at the campsite, so always drink (slowly, steadily and smartly) beforehand. Pay for one drink inside, if you must, but mostly drink water. PRO TIP: Beef jerky and Goldfish crackers in a plastic bag is the best snack to bring into the park. Sounds gross, but it's not.

It's a weekend to let go, and be someone you aren't any other time of the year. Some groups chose to wear actual costumes — look out for the bananas — while other festivalgoers opt for fake tattoos, booty shorts and flower headbands. As stated in the weather paragraph above, you must wear layers throughout the day and proper footwear to hoof it through the hills and dust. PRO TIP: No one cares what you look like. Are you warm in that poncho? Great.

Be skeptical if you will, but there's something about Sasquatch! that causes you to run into people. On the second day of the festival, phones run out of juice, and service is spotty anyway. (If you're in a big group, always have a meeting spot or use a themed totem so you can find one another). But just know every year, without fail, you'll run into someone who you haven't seen in 10 years. It's destiny. PRO TIP: Don't argue with magic.

Do not expect that you'll be camping in actual dirt lots surrounded by trees. Rather, expect to pull up to your general admission campsite in a huge grass field, and get packed in like sardines. Get to know your neighbors. They'll come in handy if you forget anything. Things to pack include: Tent, sleeping bag, table camping chairs, gas camping stove, lighter, coolers with ice, tent canopy, jumper cables (for when you accidentally run your car battery down) and sunscreen. PRO TIP: Opt for the Gold Camping. It's worth the extra money for free showers, larger lots and much closer access to the festival entrance. ♦

There are always folks who complain that a lineup isn't as good as the prior year. Ignore them. Here are the main acts you can't miss. (Bands like Speedy Ortiz and Digable Planets and Brothers From Another have all been written about elsewhere in this issue, so take a look).

Someone has to start off the main stage on the right foot, and this year it falls to the soul/funk band out of Seattle. This is the upbeat, crazy fun band that will get us all in the mood.

She was born in Spokane but grew up in San Diego, and she's had one big past year, with a Grammy nomination and a Christmas commercial with Stevie Wonder. She calls her music retro/pop/soul; you'll call it cool.

Frances Quinlan started Hop Along as her own freak-folk act, but soon added three other musicians. The group offers a raw sound you won't soon forget.

Singer-songwriter Ty Segall gets to the bottom of "emotional mugging" with his recent album of the same name. His backing band the Muggers only help to make his lo-fi garage rock sound that much more convincing.

With that hazy, slacker rock sound, the Canadian-born singer-songwriter is surprisingly somewhat prolific. Over the past four years he's released four studio albums.

The best part about this Southern rock band is frontwoman Brittany Howard. Her voice is true and shining. Don't you dare miss this set.

The electronic duo Phantogram came through Spokane in December, just without Big Boi (of Outkast). Here, you can finally see the collaborators jamming out late into the evening.

It's too bad this show is early in the afternoon, as many, still lounging at their campsites, will miss out on the Seattle rock supergroup — Julia Shapiro of Chastity Belt, Bree McKenna of Tacocat, Stacy Peck of Pony Time — and the trio's crazy dance party.

The Brooklyn singer-songwriter does what he wants. He's written albums about states, about Christmas and most recently, Carrie & Lowell. His show should lighten and uplift the spirit before we all have to go home.

Formerly of the War on Drugs, Kurt Vile is a singer-songwriter who isn't afraid to make you feel sad. That may seem like a downer, but his music is transcendent.

Florence Welch and the rest of her crew are no longer indie. Now, it makes sense that Sasquatch! promoters chose to save the biggest act for last — to get people to stick around on Monday, the most mentally trying of the days. 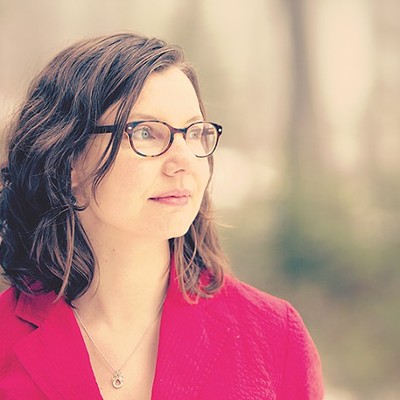 Behind the Cover: Sasquatch!