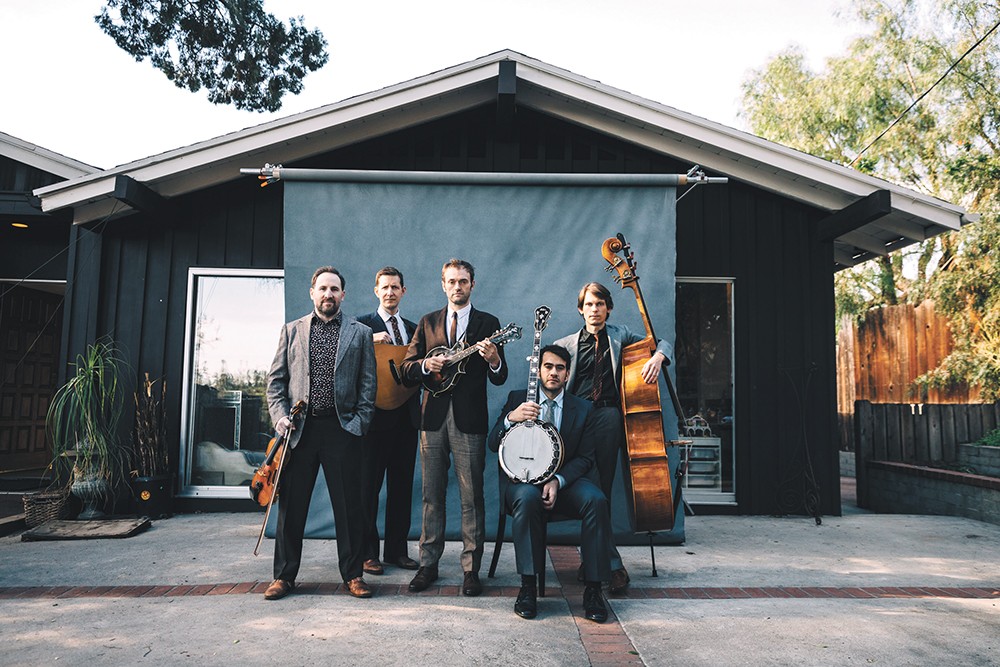 When we think of "political" musicians, we tend to mention punk bands or old folk-rockers. We don't typically look at a group like Punch Brothers — the nattily attired acoustic aces led by mandolin master Chris Thile — as the modern version of the Clash or Bob Dylan.

The quintet's latest album, All Ashore, might not be full of anti-war anthems or blatantly topical lyrics, but its nine songs are the sound of five artists coming to terms with a world they barely recognize as the same one from when the band started 12 years ago. Thile, in a phone call from the Punch Brothers' tour stopping in Spokane Aug. 15, says the album is a "meditation on being alive right now."

"We have a bunch of 30-somethings in this band, so this is certainly the most tumultuous political climate any of us have ever experienced," Thile says. "And we're also in that spot of life where we're falling in love, getting married, having children, trying to stay in love, trying to make the world a safe place for these little people we've been entrusted with."

As always with Punch Brothers, the music on All Ashore throws sounds ranging from bluegrass to classical, to rock, to jazz, into a sonic blender, with the result a stunningly smooth aural trip engineered by Thile, guitarist Chris Eldridge, bassist Paul Kowert, banjo player Noam Pikelny and fiddler Gabe Witcher. It's impossible not to get swept up by their skillful musicianship, and that's even more true in the live environment. Seeing a Punch Brothers show means seeing some of the best musicians you've ever seen or heard, regardless of genre.

Lyrically, as the listener moves from start to finish of All Ashore, the songs move from the highly personal to a wider view of the absurd world around us to songs that are almost pep talks to keep on keepin' on at the album's end. Thile equates the opening title track to "our demons hissing at us," but it sure sounds beautiful, while he compares the closing "Like It's Going Out of Style" to a "mantra-like pep talk for oneself, one's romantic partner, one's friends. Just a hopeful, communal thing."

As a whole, Thile considers All Ashore the result of a band that's more comfortable in its own skin. Early on, he says, there was "a certain thumbing our nose at expectation that I think was audible in the music, that was actually part of the theme of the music subconsciously." That "expectation" was likely a similar sound to Thile's hugely successful previous band, Nickel Creek, but he was determined to make music that veered wildly from where he'd already been with that group.

A dozen years after forming, Punch Brothers have forged enough of their own identity to not sweat anyone else's notions of what they should sound like. And all the guys in the band have outside projects. Thile replaced Garrison Keillor as host of A Prairie Home Companion radio show (now Live from Here) and continues to record with other artists, as do the other Brothers. When they get back together to record and tour, it's with a confidence they might not have had as guys in their mid-20s.

Thile considers both All Ashore and its predecessor, 2015's The Phosphorescent Blues, as efforts to look in the mirror "not as an individual, but as a member of humanity," and "check us all out."

"Increasingly, art that does that is what enables transcendence for me," Thile says, noting that in recently reading Philip Roth's American Pastoral, he was struck by the novelist's ability to address the state of the American Dream in an artful way that revealed "truth after truth that struck me."

"He's not sitting there going ... 'Here is the answer,'" Thile says. "It's just that he's trotting out all these questions and you feel less alone when you ask those questions. That's the kind of activity that interests me the most. I want to hear people ask the questions so I don't feel as alone."

Music, Thile says, offers a way to ask tough questions of people about the world in an elegant way, with some "beautiful ambiguity" and "a certain fog" that allows the listener to fill in the answers as they hear the songs.

"If there's an answer swirling around in that fog for you, you're kind of the co-composer in that situation," Thile says. "I think All Ashore lives in that fog. We're asking questions. We're in a discussion ... These are the things we need to be talking to each other about, and trying not to yell at each other about. I think music can help with that." ♦

The original print version of this article was headlined "Troubled Waters"