Racism is Not a Party-Line Issue: A Young Conservative’s Point of View 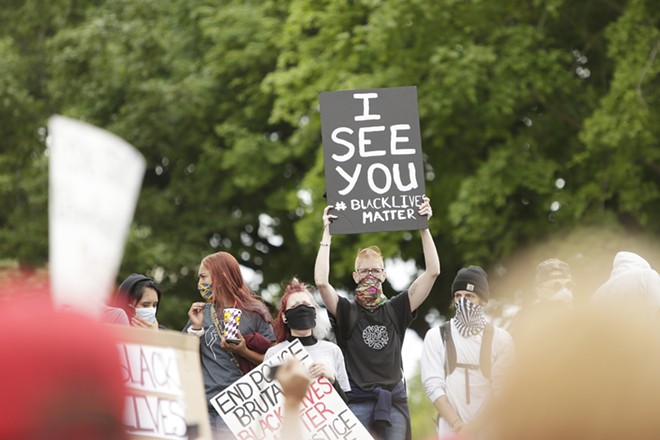 I, alongside my fellow Americans, am deeply saddened and angry about the recent displays of racism and injustice in this country. This racism is not novel; It is just being filmed. The rise of social media has highlighted wrongdoers and allowed the dissemination of videos and photos of individuals committing horrific crimes at great rates.

I recognize that as a white person in America, I can never understand how it feels to be a person of color or to be treated differently based on the color of my skin. I also recognize that I have an ability to listen, learn, and reflect on stories from people who do.

On Sunday, I attended the protests in downtown Spokane and stood alongside my black brothers and sisters in solidarity and support. I have refrained from posting on social media about this to save space for others to tell their stories and from a fear of appearing insincere. Several conversations I have had have moved me to take time to reflect and find the words that are on my heart. These are those words.

One of my peers from undergrad sent me an angry message Sunday evening telling me that I should not have been at the protest as I am a conservative. She called my presence and support hypocritical and disrespectful to the movement. This attack on my character was completely unfounded and upsetting. It is no secret that I am a young, female, conservative. However, racism and injustice have never been a party-line issue for me or my conservative peers. Would this person rather I sat in silence at home and not stand in solidarity? Would she rather I not speak out against racism and injustice? Lack of productive discourse is an unfortunate reality in this world. We forget to listen to others and find out whywhy they believe the things they do and why they take the actions they do. I think it is meaningful that conservatives not only participate in these protests, but we can also engage in more conversations about the importance of conservatives speaking up.

I call on my fellow conservatives today to remember that racism and injustice are not party-line issues, and that you do not have to give up your conservative beliefs to recognize systemic racism and to stand up against it.

This country was built on God-given rights of free speech, association, religion and more. Above all else, this country represents Life, Liberty, and the Pursuit of Happiness. Racism and injustice have no place in this country.

As a rising third-year law student, I have a great respect for the law and have spent the past six years in higher education studying political, legal, and economic systems in this country and across the world. We can be conservative and still call out racism and injustice. I can have respect for our police officers and government officials and still hold them accountable for their actions. I can support small businesses, free markets, American manufacturers and farmers, freedom of choice in education, and other typical conservative values while still standing up against racism and injustice in our communities, and that is exactly what I continue to do.

As a Christian, I believe that we are all sons and daughters of Christ and that we were each made in the perfect image of our Lord. I stand strong in my convictions that God placed us all on this Earth together for a reason and that He also weeps for this ongoing injustice. As a Christian, I feel compelled to stand and fight for my brothers and sisters, and the fact that I have conservative ideology does not impede my desire or ability to do so. In fact, it empowers me.  As a Christian, I have spent my life showing kindness, respect, empathy, and compassion for my peers of all backgrounds. I know my heart and know the actions I take in my life to make my community a loving place for all. I do not need to justify on social media what those are, as frankly, this is not about me.

I call on my fellow conservatives today to remember that racism and injustice are not party-line issues, and that you do not have to give up your conservative beliefs to recognize systemic racism and to stand up against it. I also call on my non-conservative peers to remember that we are all in the fight against racism together and to not make harmful assumptions about what is in a person’s heart based on misguided stereotypes about their political affiliation. We all come from different backgrounds and have unique stories to tell, and political ideology is neither clear-cut nor black and white. We all have our own skills we bring to the table and avenues that we can be successful in bringing about change. The important thing is to do something, even if it is not what everyone else is doing.

Rachel Platin is a third-year law student at Gonzaga University School of Law. She graduated from the University of Washington with a degree in Economics and Political Science and has experience working in both local government and nonprofit public interest organizations.