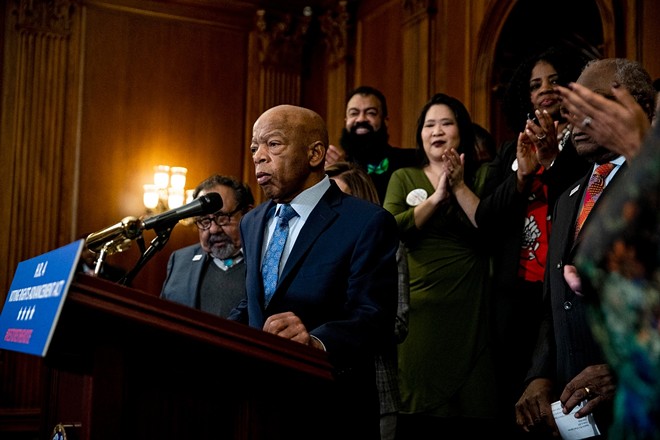 When news of John Lewis’ death first broke, messages poured into my phone and email. Friends and family remembered how I’d met my hero in 2014. The civil rights leader beaten to a pulp as a member of the 1961 Freedom Riders trying to integrate Southern bus stations; the 23-year-old leader of the Students Nonviolent Coordinating Committee who gave the most militant speech at the 1963 March on Washington. The young protestor who in March 1965 led 600 voting rights marchers onto Edmund Pettus Bridge in Selma, Alabama, to face 150 state troopers pointing their guns. When Lewis dropped to his knees and led them in prayer, troopers attacked them with bullwhips and clubs.

Actually I met John Lewis three times. At the 2014 American Library Association conference in 2014 I told him I was writing a book about Dr. Martin Luther King and Bobby Kennedy for teens. He shook my hand. "I would like to help you. I was in Indianapolis the night Senator Kennedy spoke to the crowd after Dr. King was killed in Memphis.”  I was thrilled.

"We’re one people, one family. We all live in the same house. Love each other and never hate. Hate is too heavy a burden to bear.”

In November 2014 I walked down the marbled, sparkling hallways of the Cannon Office Building in Washington, D.C. Since 1986 John had served in Congress, representing Atlanta, Georgia. Inside his office, his friendly staff greeted me. “John is on the House floor for a vote, but will be back shortly. Would you like anything to drink?” I was too nervous to drink or sit down. I spotted his large office, the walls covered with photos of King and other leaders, Bobby Kennedy’s presidential campaign poster and Lewis’ many civil rights awards. I asked if I could wait there, to study the memorabilia. An aide accompanied me inside. “We have you scheduled for 10 minutes.” I nodded, my questions memorized.

John soon arrived, striding into his office and shaking my hand once again. He motioned me to two chairs and we sat at a table, conversing like old friends. My nerves faded as we talked about what Dr. King and Bobby Kennedy meant to him.  About the night Bobby Kennedy was killed. “I was in his hotel room on the 5th floor with his sister, Jean Kennedy Smith. I saw it all on television. I just cried.”

When I asked how he felt during Bobby’s speech the night Dr. King was killed, he shook his head. “I have not been back to that spot since. It took me years to return to the church where the four little girls were killed in Birmingham. Sometimes it gets to the point where you don’t want to cry anymore.”

He told me about his early days in the movement. “We grew up so fast. I felt like I never had a childhood. I was 17 when I met Rosa Parks. Eighteen when I met Martin Luther King.”

“I was put on my track. Taught not to be afraid, not to be afraid of being arrested.” (Lewis was arrested 40 times in the 1960s, five times since he served in Congress.) “Fear will immobilize you.”

I looked at my watch. Sixty minutes had flown by. I stood up. I’d taken so much of his time. But at the doorway I blurted out, “What do we tell the young people?”

“Tell them that they give me hope. That they will show us the way.”

Outside in the hallway I leaned against the marble wall and cried. I had met my hero. He had given me hope.

He gave me hope again at the 50th anniversary of Bobby’s 1968 speech in Indianapolis. Lewis spoke about his love for Dr. King and Senator Kennedy. Then his familiar voice rose, shouting to the large crowd. “When you see something that is not right, not fair, you have a moral obligation to say something. You cannot be quiet. We have to be on the right side of history. We have to love everybody . . . We are all the children of God Almighty and none of our children should be left behind. We’re one people, one family. We all live in the same house. Love each other and never hate. Hate is too heavy a burden to bear.”

No matter how many times he’d been beaten or jailed or disagreed with colleagues in Congress, Lewis was never filled with hate. He led with love and compassion — in both his political dialog and personal interactions. Rest in peace, John Lewis. I will do my best to honor your legacy, to live with love, not hate.

Claire Rudolf Murphy has written 18 books for children and young adults. Her book Martin and Bobby: A Journey Towards Justice was published in 2018.